Skip to content
Students, workers, indigenous and campesino organizations have taken over streets all throught Colombia to protests Duque’s cuts.

A national strike referred to as, “The Great Occupation of the Capitals” began today in Bogota, Colombia at 10 a.m. protesting against right-wing president Ivan Duque’s proposed budget that denies adequate resources to a historically underfunded public education system and imposes a new value-added tax on basic goods.

Colombia: Students Occupy the Streets For The Seventh Time

Students from public universities are leading a national strike together with Colombian unions, including the teachers’ union Fecode and the Workers’ Central Union (CUT); Indigenous and Campesino organizations as well as academics and urban social movements, to march together in the streets of the countries’ regional capitals.

Protests have been ongoing since Oct. 11 with negotiations reaching an impasse when Duque refused to join the negotiating table until protests stopped, infusing his ultimate goal into a precondition. On Tuesday he announced his government wouldn’t tolerate “violence as a pressure mechanism nor vandalism as the language of the social protests,” in reference to a handful of demonstrators that have attacked police officers and painted buses stations.

Students claim that public universities need a little more than a billion dollars to continue with their normal activities besides almost five billion to settle “the government’s historic debt with universities.”

While demonstrations have taken place throughout various cities in the country, they are mostly concentrated in Bogota, the country’s capital, where police repression and violence has sent several people to the hospital. 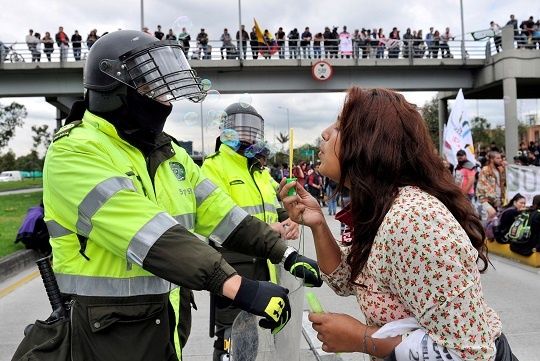 Defense Minister Guillermo Botero warned demonstrators that “blockades” wouldn’t be allowed and declared to other citizens that “mobility will be guaranteed by public force.” Students did temporarily blocked streets as they marched, but these were reopened shortly after. Botero announced the protest had passed without incidents.

In October Duque’s government and directors from 32 public universities agreed to increase the budget for education, but the deal was deemed insufficient by students.

The High Commissioner’s Office of the United Nations in Colombia has issued a statement asking the government to respect the human rights of the protesters, saying that the people are exercising their rights in a responsible manner.”

They also reminded the government that they can’t hold organizers responsible for the violent actions of a few, and called them to guarantee the right to protest peacefully.