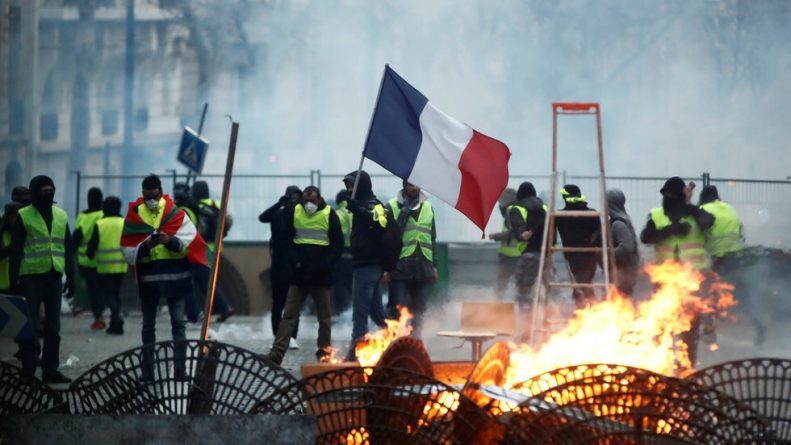 International News
December 8, 2018June 1, 2019 orinocotribune France, International, Protest, Repression, Yellow vest
France has been gripped by rallies as Yellow Vests demand new concessions from the government. Hundreds of protesters, including the movement’s leader, were detained during the demonstrations.

Yellow Vest mayhem has hit the country for the 4th consecutive weekend. Protests in the capital this Saturday resulted in clashes between demonstrators and police, with officers resorting to tear gas. Hundreds were detained and taken into custody in the capital. People in other regions have also risen up in protest.

One of the voices of the Yellow Vests, Julien Terrier, was detained during a rally in the city of Grenoble in southeastern France, the local police prefecture confirmed. He was among 18 people taken into police custody. About a thousand protesters gathered in the center of the southern city of Marseille. The march was relatively peaceful. “We are not here to break anything, we have to march openly, if we see anyone who [violates the order], he will be excluded,” one of the protesters said. Yellow Vests occupied the center of the city, with police flocking to the area of the protest. “We want to ensure that people get together,” one of the movement’s leaders told the crowd. Officers were seen in full gear getting ready to respond to clashes if necessary.

The spirit of the Yellow Vests demonstrations has even reached neighboring Belgium. At least 70 people were detained in Brussels this Saturday. Protesters gathered in Arts Lois and Porte de Namur districts in the center of the city. Police said the detentions were merely a “preventive measure.”