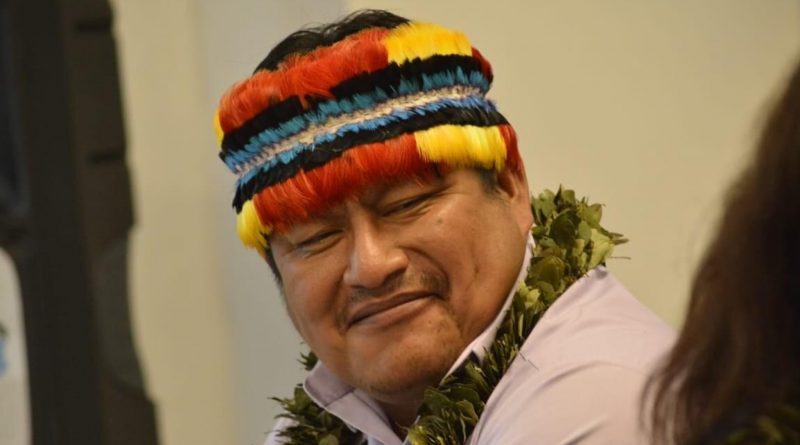 President of the Confederation of Indigenous Nationalities of Ecuador (CONAIE), Jaime Vargas, spoke to Radio Kawsachun Coca/Kawsachun News during his recent visit to Villa Tunari, Trópico of Cochabamba for a RUNASUR commission meeting. Vargas, who is an indigenous leader of the Amazonian region, reflects on the October 2019 uprising, Ecuador’s recent presidential elections and says this is the moment for national and regional unity of peoples and social forces. The full interview conducted by Oliver Vargas can be watched here. Interview transcribed by Camila Escalante.

You were here last year for Evo Morales’ return in November, in Chimoré. What’s the importance of this process of Latin American and peoples unity for the indigenous peoples of the Ecuador?

In this sense, I believe that it’s important for us today to celebrate this unity of our peoples, unity of Latin America, unity of the whole region of this great homeland, which requires more of a joint effort among the peoples where there is a demand and a mandate to build platforms of resistance struggle, truly thinking and improving the structures of the state itself, of our peoples. Because if we don’t do it, who is going to put up a fight for our rights?

It’s important to recognize the value of the unity of the Bolivian people, for maintaining that strength and for having recovered democracy and freedom and for raising this important project and declaring a Plurinational State. A state that recognizes the peoples as nations with their rights in their territories, it’s important. So we’re thankful and looking forward to discussing and defining strategies to build this great political project for the peoples: Runasur, unity of the peoples and social organizations of Latin America.

Is this demand for a Plurinational State something that has been important for the indigenous peoples for a long time?

That’s right. I believe that the struggles, through a process, become reality. The CONAIE in Ecuador have fought and we are the children and grandchildren of the first indigenous uprising in Ecuador. You are already aware of the second indigenous and popular uprising of the countryside and the city, of young people of all types of people in October 2019. October that teaches us that the struggle is the way, that the struggle is the way to enforce respect for our rights. In this sense, I believe that the Plurinational State in Ecuador has not been a gift from a government but has been the permanent struggle of the peoples of the social sectors and of the indigenous peoples and nationalities of Ecuador where we have been claiming our rights to autonomy, self-determination, the Sumak Kawsay, living well with nature.

Then in 2008 the Plurinational State was recognized in Ecuador. The right to the life of nature was also recognized, the right to resistance, the right to implement our intercultural bilingual education system of intercultural health, intercultural community communication, also to work for indigenous justice which is a constitutional right and also this right of resistance that is stipulated in article 98 of the constitution of Ecuador. But being so, we are struggling today with more than 1,000 indigenous campesino brothers and sisters and social leaders, we are today being persecuted in a Plurinational State. I believe that this is an important point of analysis, to define what needs to be the fundamental criteria for the deep changes that we need as a Plurinational State. So I believe that one of those examples is Bolivia as we’ve always said when talking to brother Evo.

President of @CONAIE_Ecuador responds to @Lenin’s proposal for a commission (to detract from the actual demands):

"We didn’t come to form commissions. The ask of the country—this is not an ask of the Indigenous people—is the repeal of of Decree 883." @jaimevargasnae pic.twitter.com/dWxUynZRKU

What were some of the lessons of the October uprising?

The most important in the history of Ecuador in October 2019, look, it has cost us lives, blood, tears and sweat. But I believe that all a process of struggle there will always be losses, there will be human losses. But with firm skin, we as leaders especially, said the decision of our people will be respected. There was a definite resolution to fight to the last consequences to achieve the objective of repealing decree 883, which was a decree imposed by the International Monetary Fund.

The government attacked the people, killing eleven brothers with more than 1,000 wounded and more than 50 brothers who lost important parts like eyes. However in the end we had to sustain it and we held out until the end.

Of course there were people misinforming in an attempt to weaken the process and that was sent from the government itself. But thanks to the strength and unity of our people, thanks to the strength of the youth, we maintained 11 days of struggle, in the streets, we created an uprising throughout the entire country and we had results. Sometimes we are asked ‘was it not the moment to overthrow the government?’ The problem is that we had not set out to do that, but if we had made overthrowing the government one of our points (demands), I think on October 13th, the government would fall. The only thing we did was to respect the resolutions made and proceed as we had planned. Indigenous peoples and social sectors came away winning because the government repealed a decree that affected the family economy, the economy of our people and that means that the people won.

Today we are being persecuted. Even today I have seven open processes of terrorism, of kidnapping, of incitement, of paralyzing public services. We have an unknown number of open legal processes but we are always ready to continue defending ourselves with the truth. It’s not as if Jaime Vargas got up himself and went and stood there and closed the roads. Today we are also seeing the news that the burning of the Office of the Comptroller General of the State was from the inside. So look, these are things that we have to analyze and we hope that our struggle will always be in defense of our rights and the defense of our peoples.

RELATED CONTENT: #LeninChao: Bitter Farewell to Lenín Moreno in the Streets of Ecuador and on Social Media

Ecuador held elections on April 11 and here in the Trópico of Cochabamba there was a lot of hope that Andrés Arauz was going to win. You also extended your support to the campaign. What was your takeaway?

You have to look a little bit beyond elections. I believe that we’ve always seen electoral processes with campaigns carried out in bad faith, a dirty campaign, campaigns mounted to cause harm to others. In that sense, according to our balance and analysis, I believe there were weaknesses within the electoral process. Those of us from the nationalities, all we did was support the campaign of Andrés Arauz. The indigenous movement, the Pachakutik movement began a campaign for a null vote, which was not a reality. At the end of the day, the ended up voting for the right.

Some organizations, peoples and nationals said that we, the indigenous movement, always see ourselves identified with the left and we need to make decisions along those lines. So that is what had happened but I believe that our duty especially as an indigenous moment we have always said, and we have warned the national government that it will have to think a thousand times before making decisions. We will always be firm and decisive in defending national sovereignty and defending the rights of the Ecuadorian people.

The elected government will have to fulfill its mandate and if it doesn’t, then the same people who elected them will have to make decisions. We will continue working and we hope that at some point there will be a true unity of the lefts, a unity of all the sectors that fight to change the country. That’s why I always invite unity beyond electoral processes, only united we are going to defend ourselves. If we are dispersed then enemies will always have us defeated, it will have us humiliated and that is what the right-wing has done.

I remember that in the time of Leon Febres-Cordero, who was right-wing, and he had his opponents killed. He created a death squad and whoever was against the government had to be disappeared. I believe that this has always been the mechanism of the right-wing. We, the peoples, must always be firm and determined to continue defending our rights, our territory, which for us is life.

And can it be said that there is a left and a right-wing within Pachakutik and that part of the indigenous movement?

That’s been clearly seen and that is why we are going to do an analysis or evaluation, from within to know what happened. Sometimes we say that the left is the worst enemy of the people and lean to the right, other times the bigger enemy is the banker. We will have to do an evaluation within the congress of the indigenous movement and make criticisms and self-criticisms to be able to advance and design what our path must be.

Is it possible to create a new unity among progressive sectors throughout the country in the future, not only on electoral issues but something more organic?

We have called for national unity. It is the moment to unite, it is the moment, of course there must always be diversity of thought, it’s not like we are all going to agree. But in that diversity of thought there must be unity of the peoples, of the workers, of Afro-descendant peoples, of the Montubios, of the indigenous peoples, of the youth, of the professionals, of all, where we can think together, debate together and lead the process of development and profound changes needed in our country. The right-wing will never analyze the social problems of our people.

I believe that it is the moment to join efforts and unite on a regional level as well. We’re also watching hoping that brother Castillo wins the elections in Peru. But you know that the enemy is working intensely through the mass media, on social media, carrying out a campaign to delegitimize the brother, giving false information. We hope that the processes of struggle continue and we will always remain firm as the indigenous movement of Ecuador, we are more united than ever, of course there will always be disagreements, we always have to adjust. We have to define ourselves also recognizing our mistakes, that is to say, if we have made mistakes then we have to improve. We have to take actions so that this does not happen again, and that has to be the way to change this history of our peoples.

Kawsachun News’ article on the RUNASUR meeting can be read here.