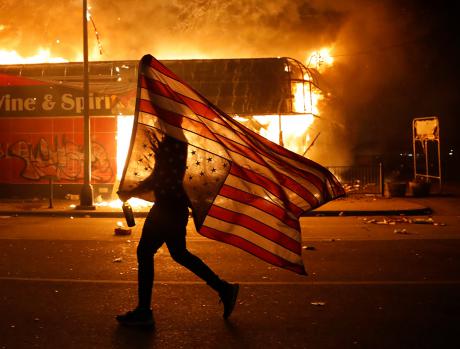 The brutal police killing of George Floyd has sparked a powerful uprising that will settle for nothing less than justice. It is a case of murder. George Floyd, an African American man, was killed in broad daylight in front of witnesses who videotaped the crime. The crime was carried out by Officer Derek Chauvin and three accomplices from the Minneapolis Police Department. And everyone knows that the Minneapolis Police Department has a history of killing Black people for being Black.

The response from the community in the Twin Cities has been nothing short of an inspiration to all who yearn for equality, freedom and liberation. A day after the killing, 20,000 people marched through the streets of South Minneapolis, a protest that included large numbers of African American youth and others of all nationalities and ages. The Third Precinct Police Station – where the killer cops operated from – was surrounded. Police fired tear gas and rubber bullets. Rocks, bricks and bottles were thrown. Thousands gathered at the police station on May 28. The police were compelled to abandon the station. It was taken over and burned.

At big retail outlets, like Cub Foods and Target, the urban poor of all nationalities are “shopping for free.” Many small Black and Latino business owners, who have been adversely affected by the uprising, are expressing their approval of the fight to end police crimes. This struggle is just and enjoys widespread support across the Twin Cities.

City, state and law enforcement officials have made much about “outside agitators.” In truth, this rebellion was not conjured into existence. It is product of police crimes, racist discrimination and systematic inequity. People have had enough and are taking things into their own hands. That one of the cops involved in the killing, the now ex -Officer Chauvin, has been taken into custody shows the power of our movement. Given that his accomplices are still loose, that Chauvin needs more charges, and that police crimes need to be curbed means that battle needs to continue. More of what we have had this past week is what we need.

RELATED CONTENT: US Official Confessed to WSJ how They Work to Promote Death and Distress Over Millions in Iran and Venezuela Through Illegal Sanctions

Everyone who is concerned about our right to protest needs to insist on the withdrawal of the Minnesota National Guard. It is not part of any solution. The Guard is here to make sure the problem remains. It was wrong to use the National Guard against demonstrators at the Republican National Convention in 2008 and it was wrong to use the Guard to break the Hormel strike in 1986. They need to leave. Now.

We need to defend our democratic rights and oppose measures that are contrary to those rights – like the curfew implemented May 29. Unjust laws are meant to be broken and those that stand up for justice must be defended.

The United States is a jail house for the oppressed. The time has arrived where large numbers of people want to escape. There must be justice for George Floyd. Nothing short of that will do. Right now, in our community there many who have lost loved ones to police crimes. This must be addressed. We need community control of the Minneapolis Police Department. Things must change. They will change. In the streets of the Twin Cities, we can make that change happen.