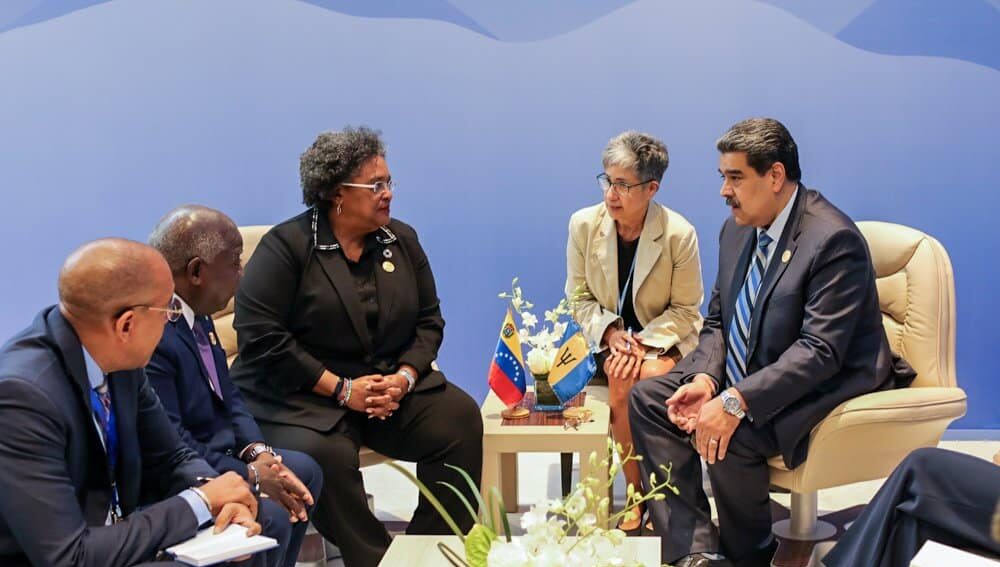 This Tuesday, November 8, during the 27th Conference of the United Nations Framework Convention on Climate Change (COP27), Venezuelan President Nicolás Maduro held bilateral meetings with Barbados and South Africa to strengthen the bonds of friendship.

With this meeting, Venezuela reiterates its intention of continuing to deepen the relationship with Barbados, which is built on cooperation and mutual benefit.

The leaders also took the opportunity to outline the contributions they can make together to address the climate crisis, the issue that brings them together at COP27.

“Pleased to be able to talk with Mia Mottley, Prime Minister of Barbados, with whom I agree on the need to protect our ecosystem, human life as a fundamental principle for the continuity of the world as we know it,” President Maduro tweeted.

According to the Presidential Press release, the two presidents ratified their common visions to face the climate crisis and review work in strategic areas.

Since establishing diplomatic relations in 1993, Venezuela and South Africa have signed various cooperation agreements in political, commercial, energy, oil, gas and mining areas, amongst others.

Bilateral relations have been fueled by maintaining solid economic cooperation based on agreements signed at the Venezuela-South Africa Business Forum, held in 2020, aimed at strategic alliances in the commercial, mining, oil, agricultural, and tourism areas.

President Maduro Calls For Summit in Defense of the Amazon (+ COP27)

The countries share cooperative agreements between the Venezuela South Africa Chamber of Commerce (Vensa) and the Federation of Chambers and Associations of Artisans, Micro, Small and Medium Industries and Companies of Venezuela (Fedeindustria).

In recent years, Venezuela and South Africa, in addition to strengthening their economic relations, have deepened their ties of cooperation and solidarity in different international scenarios, including the Non-Aligned Movement (NAM).