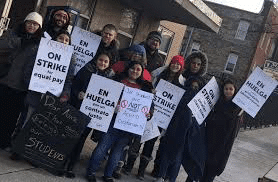 Chicago, IL – Chicago teachers Union (CTU) teachers and paraprofessionals in the Acero/UNO charter network have voted overwhelmingly to ratify a new contract that will dramatically improve teaching and learning conditions in the charter network’s 15 campuses across Chicago. The wins were achieved after a historic five-day strike that saw hundreds of union educators and paraprofessionals take to the streets to demand a fair contract, joined by parents, students and allies calling for change at schools run by Acero. Growing numbers of elected officials joined in the call for a decent contract and accountability from charter executives.

As the first strike of a charter operator in the nation, the walkout is a warning call to other charter companies in Chicago and across the country: teachers will take to the streets to stop the shortchanging of their students and ensure that public dollars are directed to classrooms, not boardrooms.

“We said from day one that this strike was about educational justice for our students and their families, and the contract our members overwhelmingly approved advances that cause,” said CTU President Jesse Sharkey. “But we’ve also shown Chicago and the nation that the collective power of teachers, paraprofessionals, students and communities can transform not just our classrooms but an entire industry.”

The contract ratified by Acero/CTU educators and paraprofessionals includes enforceable class size reductions and management penalties for class size violations. It also features management commitments to comply with special ed laws and staffing levels, which have been a chronic problem in both CPS charter and district schools, protecting resources for the schools’ most vulnerable students. It provides for equal pay for equal work with CPS educators, who teach the same students but whose compensation has been significantly higher than those working for private charter operators. Sanctuary school protections, including language enshrined in the contract that bars schools from asking students about their family’s immigration status, and that bans ICE from school property or access to student records without a legal mandate are also a part of the contract.

“I’m so proud of our teachers and paraprofessionals and all the parents and students who walked the picket lines with us in the cold each morning,” said Martha Baumgarten, a fifth-grade teacher and member of the bargaining team.

The strike drew national attention from educators and labor leaders who recognized the historic significance of challenging the influential business interests and corporate elites that promote charters as a cornerstone of their school privatization agenda. It also comes as Chicago’s charter industry is losing one of its biggest backers, outgoing Chicago mayor Rahm Emanuel.

“This is a victory for every educator who sees children getting short-changed by privatization and charter operators putting their business models over the needs of our students,” said Chris Baehrend, chair of the CTU Charter Division. “With this strike, CTU members have demonstrated their resolve to do what it takes to hold the charter industry accountable and put public dollars where they belong – into the classrooms and educations of our students.”