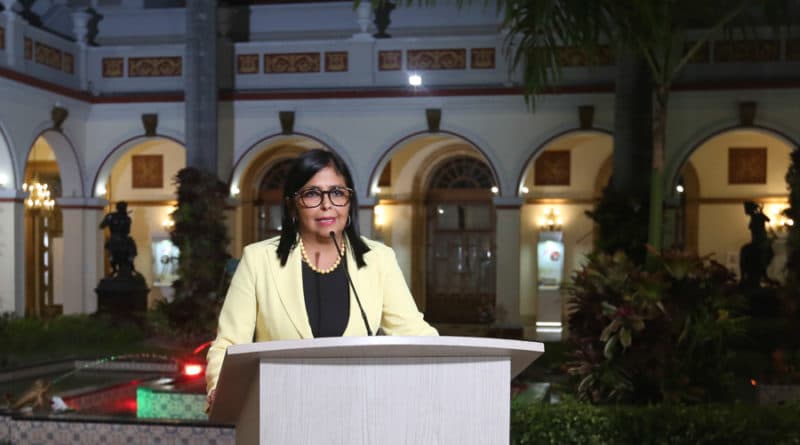 Venezuelan Vice President Delcy Rodríguez reported Wednesday 15 new cases of Covid-19 coronavirus detected nationwide, bringing the total to 106. She reported that the World Health Organization approved $ 2 billion for a number of countries that have requested support, including Venezuela. The Venezuelan government has sent communications to 12 governments and 28 financial institutions that keep the country’s resources blocked, requesting their release in the face of the Covid-19 pandemic.

In a statement from the Miraflores Palace in Caracas, she explained that 5 new cases come from Miranda state, 4 from Aragua, 2 from the Capital District, 2 from Zulia, 1 from Bolívar and 1 from the Los Roques.

She pointed out that the findings come from the screening carried out through the Patria System survey, which has been completed by 14,168,731 people from the website www.patria.org.ve . Of these, it was determined that 39,752 Venezuelans must be visited and 30,145 people have been already visited in house-to-house screening sessions, which began on Friday, March 20. The remaining cases will be visited tomorrow.

Of these, it was determined that 1,830 people must undergo screening tests, which are currently being carried out.

“This mechanism of screening expanded and personalized because it will allow personalized attention, the determination of contact groups and the activation of medical protocols and treatments,” she added.

She thanked the work undertaken by 19,903 people, including medical personnel, the Armed Forces and community leaders.

WHO approved resources for Venezuela
The vice president also reported that she held a meeting with representatives of the United Nations System in Venezuela, who confirmed that the country is taking appropriate measures to fight Covid-19. She reported that the World Health Organization (WHO) has approved $ 2 billion for a group of countries that require special attention to deal with the coronavirus pandemic, allowing them to equip themselves with special suits, masks and other materials. Venezuela is included within these countries, despite its status as a country illegally sanctioned by the United States.

She noted that the WHO director recommended that special attention be given to health workers, who are at the forefront of combating the coronavirus. Rodríguez points out that health professionals are guaranteed protection. They also recommended intensifying laboratory tests.

Venezuela resources blocked
She reported that the Venezuelan government has sent communications to 12 governments, where there are 28 financial institutions that keep the country’s resources blocked, requesting their release in the face of the Covid-19 pandemic. Communications were also sent to these institutions. She reiterated that all international bodies that practice these illegal blockades and sanctions against Venezuela will be reached.

“Venezuela is not asking the world for alms. Venezuela has sufficient resources to cover its needs, to access and supply everything that is necessary,” she said.

She also reported that a new flight will arrive this Thursday with humanitarian aid from the People’s Republic of China, through the cooperation mechanisms between both nations. But there will also be an important donation sent by this government, she said. She also thanked the Russian government for its support.

In two or three days, another flight will arrive with supplies and tests to reinforce the mass detection campaign, Delcy Rodríguez explained.