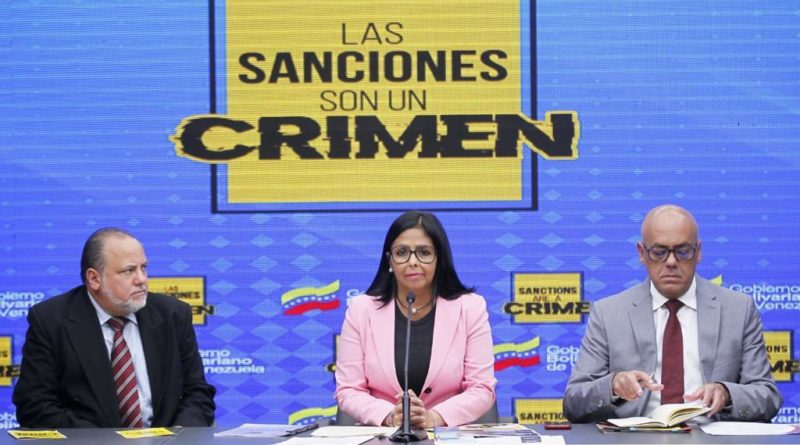 Executive Vice President Delcy Rodríguez reported that the International Criminal Court (ICC) opened a preliminary examination of the complaint made by the Venezuelan authorities against the United States regime, due to the consequences of coercive and unilateral measures imposed against that country, misnamed “Sanctions”. “The preliminary exam already exists and that will lead to an investigation,” Rodríguez said during a press conference from the Miraflores Palace.

In statements broadcasted by Venezolana de Televisión, the Executive Vice President said that, in this first stage, the National government is demonstrating with numbers the impact that the “sanctions” that the US government has illegally imposed against Venezuela, in each sector of the population.

In the next few days, the Minister of Foreign Affairs, Jorge Arreaza, will present to the International Criminal Court a total of 27 reports, where the difficulties of the Venezuelan state in the acquisition of medicines, medical equipment and supplies, as well as vaccines, are exposed. They threaten the right to health of children, adolescents, older adults and people with disabilities.

RELATED CONTENT: Venezuela: How Grassroots Solidarity is Helping to Break US Blockade

The vice president said that the entry of foreign exchange to the nation has decreased by 90.5% due to the imposition of unilateral coercive measures. The financial restrictions of the United States government point to the generation of “an economic collapse” through the decrease in the operational, logistical and administrative capacity of the Venezuelan oil company, PDVSA.

“From December 2014 to 2020 there has been an important timeline, from the legal point of view, and it has to do with how they (the United States) have been choking the national oil industry,” she said. She explained that “176 Venezuelan public entities have been illegally sanctioned”, as well as “133 officials and 22 individuals for having an economic, financial and commercial relationship with Venezuela” by the US regime.

RELATED CONTENT: Venezuela Responds With Principled Conviction to the Desperate US Attempts at Regime Change

She said bluntly that the sanctions have been weaving a structure to prevent the financial exercise of the Venezuelan state for the acquisition of medicines, food and vaccines. On February 13, the Venezuelan government filed a complaint with the ICC to investigate crimes committed against the population by the United States government against Venezuela. The complaint lodged by Venezuela before the Prosecutor’s Office of the ICC indicates that the unilateral coercive measures imposed by the US government since at least 2014 constitute a crime against humanity, provided for in article 7 of the Rome Statute.

The statements are given one day after the United States government reported on the renewal of the US Executive Order declaring the nation as an “unusual and extraordinary threat” to the security of the US.

This decree has allowed the US government to apply coercive measures to Venezuela, which has caused the nation financial damage of 116 billion dollars, and that prevents the purchase of medicines, food, seeds for agriculture, technology for telecommunications; and interferes in public and private imports.