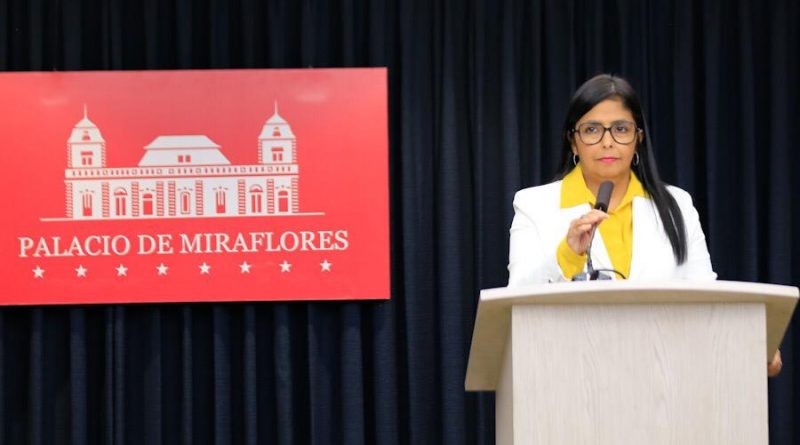 Venezuelan Vice President Delcy Rodriguez strongly rejected the decision of a US court of appeals, according to which the Canadian mining company Crystallex International can keep the assets of the Citgo company, established in the United States but owned by PDVSA, to collect some 1,400 million dollars that Venezuela allegedly owes.

On July 29, the Court of Appeals for the Third Circuit of the United States, in Philadelphia, rejected a resource from Venezuelan oil company PDVSA seeking to cancel the order issued in 2018, which allows the Canadian mining company Crystallex to charge Citgo assets with an alleged outstanding debt of the Venezuelan State.

Rodriguez called the decision of that court “unusual.” She noted that a “great material and procedural fraud against the Republic” was organized to remove the sovereign immunity rights of Venezuela and to take the case to a US court, to illegitimately appropriate Citgo.

“We denounce to the world that it is a transnational organized crime operation to steal the resources of Venezuela. A great worldwide scam. And Venezuela, the Venezuelan State, will continue to exercise competing actions in all international venues. We will also denounce it to the United Nations because resolutions of the General Assembly are being violated,” said the Vice President.

She explained that Ricardo Haussmann, advisor and representative of the opposition deputy Juan Guaidó before the Inter-American Development Bank, proposed that the case of the Venezuelan company Citgo had to be resolved before US courts, for which he devised the allegation that PDVSA and the Bolivarian Republic of Venezuela has the same legal figure, “to remove the protection and guarantees that the Venezuelan State has when it comes to defend its legitimate rights.”

The lawyer José Ignacio Hernández acted as an expert hired by Crystallex at the trial stage in Delaware, and in 2017 he declared before said court that PDVSA and the Bolivarian Republic of Venezuela were the same legal entity.

Subsequently, in 2019, José Ignacio Hernández was named the supposed “Procurator” of Venezuela by the deputy Juan Guaidó, whom the US government supported to proclaim himself Venezuelan interim president. Hernández acted as “defender of Venezuela to guarantee the dispossession of Citgo through this mining company,” said Delcy Rodríguez.

Rodriguez insists that this is “a complete violation of international law” and “a great global scam,” which makes the United States “one of the most dangerous countries for foreign investment”. She points out that it seeks to disturb the legitimate defense of the Venezuelan State against international instances. Remember also that the United States government, by not recognizing President Nicolás Maduro, prevents the legitimate Venezuelan Attorney General from acting or having representation in the courts of that country.

The vice president recalled that, in the dispute between the Crystallex company and the Bolivarian Republic of Venezuela, dating back to 2008, “this company never had mining rights, legitimate titles or property in the Las Cristinas mine, one of the largest gold mines of our continent”.

She recalled that this was one of the decisions taken by the then President Hugo Chavez, through the Ministry of Environment, not knowing the environmental plan presented by the company because it had “profound deficiencies that damaged the rights of Mother Nature.” From there a litigation began to withdraw the contract of services to the mining company, and recalled that it was, in any case, a contract of services and operations on the mine “which in no case gave legitimate or property rights to the Crystallex company”.

Rodríguez released chats in which José Ignacio Hernández, along with Carlos Vecchio, Juan Guaidó and other members of the Venezuelan opposition, planned the appropriation of the Venezuelan company Citgo, of the Venezuelan Monómeros (based in Colombia) as well as gold and the Venezuelan debt, in collusion with US officials. She denounced them for functioning as agents of transnational companies.

She also recalled that Mike Pompeo, Secretary of State of the United States, recently recognized in a forum that he, as director of the Central Intelligence Agency (CIA), learned to “cheat, lie and steal”.