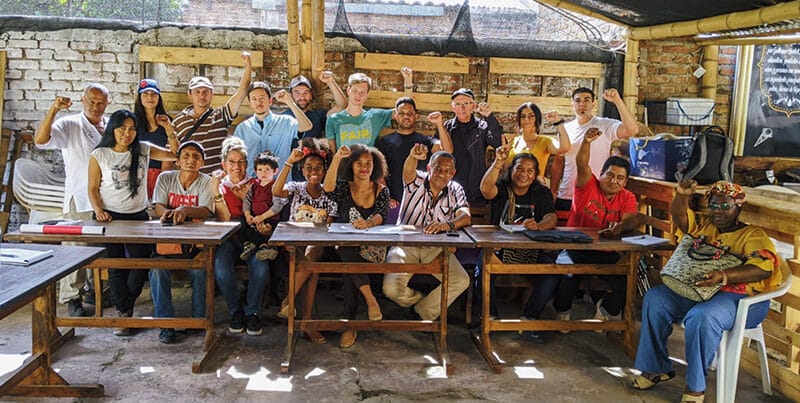 The situation has recently gotten even worse in Colombia—already the world’s most dangerous place to be a union member.

Right now social movement leaders, union members, and participants in the peace process are being killed at a rate of more than one victim per day. With the restrictions and curfews related to the coronavirus, death squads can more easily find their targets at their homes, and have even massacred entire families.

One of the labor organizations that has suffered the highest levels of violence and forced displacement in Colombia is FENSUAGRO, the National Federation of Agricultural Unions, which was created to unite the labor movement and the farmworkers movement.

FENSUAGRO advocates for the rights of farmworkers, laborers, and rural indigenous and Afro-Colombian people. It fights for comprehensive redistribution of farmland and for the basic right to live and work on rural land, which has been kept from these communities for far too long.

The Colombian government has never fulfilled its commitment to honor the land rights of peasant farmers, the indigenous, and Afro-Colombians. Today it prioritizes the privatization of land for the benefit of agribusinesses, large-scale landowners, transnational extraction (such as mining and oil), and narco-traffickers. Using land for small-scale farming is not of any interest to the state.

The union’s efforts have been fruitful, but have been met with unrelenting violence. Since its inception in the early ’80s, FENSUAGRO has been brutally targeted by military and paramilitary forces. Rural families have been forcibly displaced by threats and violence with little protection from the government.

Traditionally, rural, Afro-Colombian, and indigenous families have worked plots for generations, more often than not without land titles. Big agribusinesses, cattle ranchers, transnational corporations, and wealthy landowners have been able to claim land that is not theirs by acquiring titles through a legal system farming families have no access to. FENSUAGRO has long fought for reforms that would correct this situation.

The union also represents workers in agricultural industries. Roughly half its members are family farmers, and the other half are farm workers. Between 2016 and 2020, 38 FENSUAGRO members were murdered.

Maya Hernández of the Alliance for Global Justice spoke last month with Elsa Nury Martínez Silva, a longtime farmworker activist and the current president of FENSUAGRO, about the union’s efforts to gain autonomy and help people live on the land that is rightfully theirs.

Maya Hernández: Can you tell me a bit about yourself? Where are you from and how did you find FENSUAGRO?

Elsa Nury Martínez Silva: I come from a farming family that has been involved with FENSUAGRO since its inception in the ’80s. When I was a kid, I was part of the youth program at the organization. I’ve worked in various roles at the union. At one point, I worked to uplift women in certain regions, when I was a part of the National Junta [Board] of FENSUAGRO. I later became a part of the executive committee of FENSUAGRO and helped organize women and children. In 2015, I worked to advance our environmental efforts and in February 2019, I became president of FENSUAGRO. As you can observe, FENSUAGRO has always been in my life.

In the ’80s, we signed a petition that said that violence is not the answer. We believed that having a dialogue with FARC [the Revolutionary Armed Forces of Colombia, a guerilla group], that creating peace accords, would create less violence. Today, however, we see more violence, more people in paramilitary groups armed across all the territories. They are the people who assassinate farmworkers and defenders of the land. This is unfortunate, because we would have hoped that they would be on our side, fighting alongside us.

It is difficult to understand what those armed groups are defending when they kill us, what role they are playing. The national government has the responsibility to protect us. Several police and military forces have been present where we advocates have been killed. So they are also not at all excused from partaking in the murder of our people as well. It is difficult to understand why they don’t defend the population, why they don’t protect us, because we are all Colombian.

Why the violence? Where and who is it coming from?

There are many political and financial interests generating the violence against farmworkers. It is difficult to point fingers and say it’s because of only this or that. It’s many factors converging, and sometimes it is difficult to decipher the entirety of what is going on. What we do know is that there are many armed groups who are defending the interests of political parties and of narco groups. FENSUAGRO is a federation made up of people who, at its inception, came from roles in agricultural government and municipal positions. In 1976 came the decision to break off and create a union organization that was affiliated with the main union confederation, the CUT (Unified Confederation of Workers), to push for the rights of agrarian farmworkers. Starting in 1976, departmental unions formed across Colombia.

The ’80s brought a lot of violence against the federation, and many farmers were pushed out of their land, murdered, or detained. This period made it so that unions had to become stronger to protect the farmers. In the ’80s, recognizing the connection between the labor movement and the farmworkers movement, FENSUAGRO was created as a unitary union movement joining the labor movement with the farmworkers movement.

In the ’90s, we lost a lot of infrastructure due to violence. We also stood in solidarity with Black Colombians. In 2013, we actively participated in the national agricultural strike. This was a very impactful strike that lasted 54 days and eventually constituted an agrarian ethnic and popular movement.

In 2016, the peace accords were signed into effect. The assassinations of leaders of the federation and of indigenous farmworkers have significantly increased and continued despite those peace accords.

We believe that being a farmer is not a crime; being a social movement leader is not a crime. People are assassinated today because of that. Being farmers who defend the territory makes us targets and risks our lives. The fight continues. We continue to plan and prepare for the next meeting of the federation’s congress. We were going to hold it this year, but because of the pandemic we have had to put it off, hopefully to next year. We continue advocating for the right to feed ourselves, to grow our food, to get food. We believe that the defense of the land has to take place on the land.

What are your current hopes and struggles?

We at FENSUAGRO proposed four agrarian reforms. We have yet to see them followed through on.

The first is access to the land. We demand formal ownership of and paperwork for that land for farmworkers.

Second, we created a fund to help farmworkers get land who otherwise wouldn’t have access because they can’t afford it. It’s a fund to buy land.

Third, return the land to those whom it was taken from. Some people who returned to their land and revitalized it were assassinated. Support from the government for land for ethnic workers has not increased in any way. We want the federation to be recognized as a victim of the conflict, of the violence. There is an investigative commission that has expressed concern for us. We want justice, we want reparations, we don’t want that violence to continue.

The fourth point recognizes that there are more problems with coca production where there is no government regulation. We ask that the state focus on the health and education of the people. The health of the farmer is not prioritized. The land has been poisoned. All of this affects the federation and hasn’t been acknowledged by the government.

Can you tell me a bit about the violence and repression that members of FENSUAGRO have been confronted with?

When the peace accords happened, we were worried that paramilitary groups would come and surveil us. The only action that the government has taken is with the military and their failure to invest in helping people.

The persecution of the farmers and the unions has been clear. They connected us with the guerillas because we didn’t agree with the government. With the stay-at-home order in Colombia [because of Covid], farmworkers staying home are in great danger. The paramilitaries go to their homes and murder them without anyone witnessing it, because of the stay-at-home order. It’s horrible. FENSUAGRO victims are not just leaders of the union, but also of their families.

This has become much more apparent with the pandemic. The pandemic isn’t killing us—the paramilitaries are killing us. We need Colombians to understand that the peace accords should mean peace for everyone. We can’t continue memorializing people who have died, or watching statistics grow. We need peace to be instituted.

Many of us don’t know what peace is in this country. We don’t know what that looks like. There is no commitment on the part of the government to resolve the issues and conflicts. We at FENSUAGRO exist as a call to action for the rights of all people everywhere.

Can you tell me a bit about FENSUAGRO’s efforts to uplift women’s role in the struggle?

Giving women the space to be high-ranking members of the union is very important. Prioritizing their involvement is very necessary for the transformational work we are trying to do.

We, as women, have always had solidarity with one another. We also recognize that men who support us are also an important factor. We all need to support each other, that’s the truth of it.

Having a woman who is president at FENSUAGRO shows everyone that women are capable and are vital to the continuation of the union.

How can unions in the United States support FENSUAGRO?

Featured image:  FENSUAGRO, the National Federation of Agricultural Unions, was created to unite the labor movement and the farmworkers’ movement. Photo: Alliance for Global Justice, cropped from original.

Maya Hernández is a National Co-Coordinator at the Alliance for Global Justice. She has translated this interview from the original Spanish.