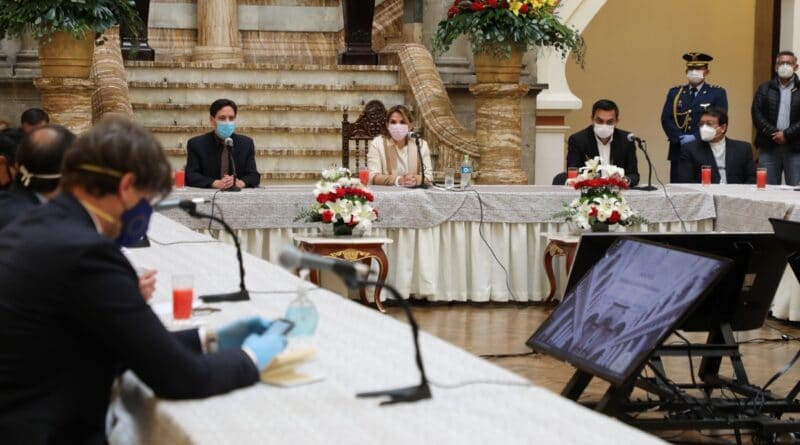 After more than five hours of dialogue between the Supreme Electoral Tribunal (TSE), the Central Obrera Boliviana (COB) and the Bolivian social movements, a consensus was not reached to define a new intermediate date for the general elections, which would bring political and social stability in the country run by an interim government, Xinhua reported.

“There was no agreement and Salvador Romero, president of the TSE, did not accept an intermediate date, our fight is with the Electoral Tribunal,” said the executive secretary of the COB, Juan Carlos Huarachi, leaving the meeting. He explained to journalists that he was considering setting up a new “intermediate” date, which was not accepted.

The leader left responsibility for the situation the country is going through to the TSE appointed by the de facto government of Áñez. He reiterated the validity of the resolution of the council of his sector: indefinite general strike with mobilizations demanding elections on September 6.

Candidates and leaders of political parties joined this strike for a solution to the conflicts in Bolivia; they rejected the possibility of attending this Sunday’s meeting with Jeanine Áñez, head of the interim government supported by the opposition, to finalize the confirmation of the elections.

The candidates Carlos Mesa (Citizen Community, CC), Luis Fernando Camacho (We believe) and Jorge Quiroga (Free 21) ruled out their presence; Luis Arce (MAS) did not even refer to the issue. The TSE and the Church will attend the meeting, while Chi Hyun Chung (Front for Victory, FPV) will try.

The secretary of the COB, Huarachi, also ruled out his participation in the dialogue called by Añez, as he considered that it is not the responsibility of the interim government to modify the date, but rather the Electoral Body’s. For his part, the president of the TSE, Salvador Romero, confirmed the October 18 date of the elections.

“The Supreme Electoral Tribunal has left a memorandum of understanding for the consideration of the movements and social organizations, which sets its position, which reiterates that the process and the voting day for the 2020 election will be on October 18,” he asserted. In addition, he said that this act of understanding expresses the willingness to reach agreement among all powers and institutions. Romero confirmed attendance at the meeting with Áñez.

Meanwhile, the vice president and incumbent president of the Senate, Milton Barón, commented that important progress was made in the meeting between the TSE and the social movements.

“The first advance is that the general elections will be guaranteed through a law,” in addition to the fact that the date that is defined will be immovable, “definitive”, he said.

However, he said that the signing of the final agreement was blocked on the new date, which is not September 6 or October 18, but an intermediate one.

This meeting failed after Áñez proposed to sign an act of compliance with October 18 as election day and proposed to form a commission to promote dialogue with those who were absent. None of the proposals were agreed upon.