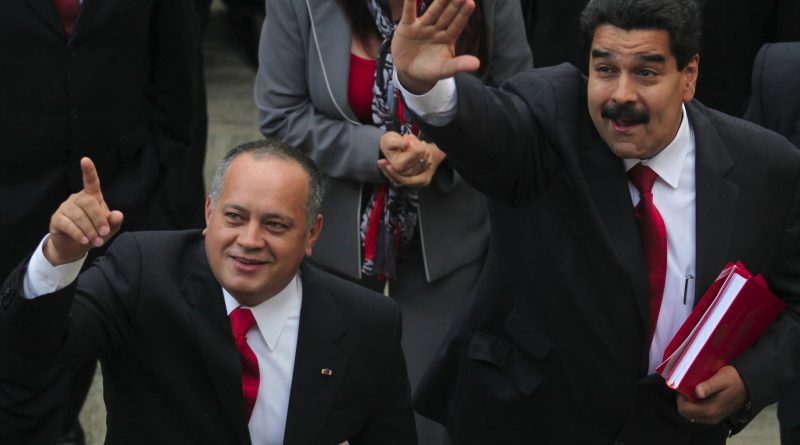 The United States has initiated secret communications with the socialist leader Diosdado Cabello while officials close to President Nicolás Maduro try to obtain guarantees that they will not suffer reprisals, wrote Joshua Goodman, head of the Associated Press (AP) in Venezuela, Colombia, Ecuador and Peru, who attributed such statements to an alleged high-ranking US government official, whose name was not revealed.

“Cabello, considered the most powerful man in Venezuela after Maduro, met last month in Caracas with a person who is in close contact with the government of US President Donald Trump. A second meeting is being organized, but it has not yet been held,” says the official, according to the AP office.

It is not the first time Goodman writes – or acts – against the Venezuelan authorities and the country.

Already in 2014, when the country was shaken by violent street protests, promoted by the leader of Popular Will, Leopoldo López, Goodman wrote that the destruction of property and the death of people were not perpetrated by protected and financed criminals disguised as protesters but by motorized pro-government collectives, according to the Mission Verdad portal.

RELATED CONTENT: How Washington Is Meddling in the Affairs of Hong Kong

Also in 2014, the US journalist tried to ridicule, in an international press conference, President Nicolás Maduro, who made a long exposition around the murder of militant Chavez Robert Serra, in which there were unpublished revelations. At the beginning of the round of questions, Goodman asked what Venezuela was going to do to cut its expenses due to the fall in oil prices.

The communicator’s question was understood as an attempt to divert interest around the issue of Serra’s murder and its causes, to minimize it and instead distract public opinion.
“Excuse me, that is not the subject for which this press conference was called,” was the blunt response of the Venezuelan President.

Now, on this occasion everything indicates that his “analysis” is not part of tremendous journalism, although it seems so because of the absence of reliable sources, but is part of the new strategy of the United States to undermine the power of president Nicolás Maduro.

Sputnik offered on Monday some statements that Elliott Abrams, a special envoy of the White House for Venezuela, had recently made in an interview of the American Business Institute with an account of Washington’s general plan to overthrow Nicolás Maduro
“We are trying to, let me use a good Marxist term, ‘increase contradictions’, that is, we are putting enormous pressure on these individuals. (…) We are putting pressure on the entire system.”

And later he added, to a question about why the military option does not apply as a fast track: “We believe that there are many civilians, even in the PSUV, which is the old party of Hugo Chavez, the Chavisat party, realizing that Nicolás Maduro is destroying the party, destroying his brand.”

For his part, Senator Marco Rubio declared two days ago (August 17) to the American newspaper El Nuevo Herald that Nicolás Maduro was losing power in Venezuela and that important officials of his regime conspired to overthrow him after reaching the conclusion that his tenure in power is already a problem. “He is surrounded by people who want to remove him to put one of them in power,” he said.

These statements by Rubio coincide with what Goodman writes “Diosdado has a lot of power within Venezuela, and his influence on government and security forces has increased as Maduro’s power has weakened.”

Later Goodman insists: “The goal of these contacts is to increase the pressure on the regime by contributing to the fight that the United States believes is taking place behind the scenes between rival power circles within the ruling party (…) Similar contacts are being made with other senior Venezuelan officials, the US official said, and the White House is just listening to what it would take for them to betray Maduro and support a transition plan.

But the strategy is not only being used on Diosdado Cabello, but also with other senior government officials, such as Defense Minister Vladimir Padrino López and Interior Minister Néstor Reverol Torres.

“An opposition politician who was informed of the contact said that (Joshua Goodman insists on using anonymous sources) the Minister of Popular Power for Defense, Vladimir Padrino, and the Minister of Interior, Justice and Peace, Nestor Reverol, are some of the officials who have had indirect contact with the Americans… ”

On Monday, from La Guaira – during the press conference of the party -, Cabello did not deny the meetings but described the information provided by the news agency as media manipulation, while pointing out that behind this type of news “there are some mercenaries”.

Cabello emphasized that he would meet “with anyone only requesting three conditions: that President Nicolas Maduro authorizes it, I will not speak for Cabello, but for Venezuela; and I said that here in Venezuela. I meet with the owners of the circus (US officials), not with those who work for them (local opposition).” In this regard, he stressed that in a possible conversation with the US government, the only proposal that would be taken is that in Venezuela “there will be elections of the National Assembly before December 31, 2020. We will respect this Constitution.”

On Thursday in a public event in La Guaira State, talking on this issue, President Maduro confirmed that his government has held meetings in recent month with different representatives of the US government and that they will keep doing so to avoid an escalation in the current political situation but only requesting respect to Venezuela’s sovereignty.