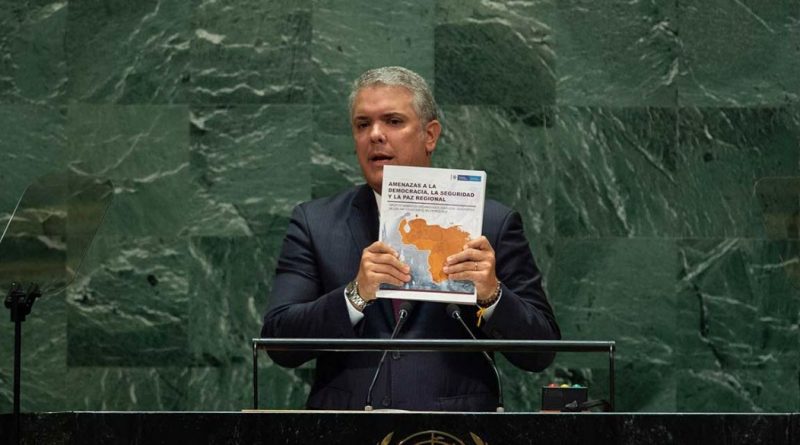 The Colombian newspaper “El Colombiano” reported that President Iván Duque falsified at least one of the photos he gave to the United Nations and that, according to the Colombian president, he used to demonstrate how Venezuela protects and allows the presence and recruitment of children by armed irregular groups.

The newspaper El Colombiano says one of the photos presented by President Ivan Duque before the 74 General Assembly of the UN on the alleged presence of guerrillas of the ELN in a school in the state of Tachira was not taken in Venezuela, but in Colombia.

In a post in his Twitter account, this outlet insisted that the president “was wrong”, because the photographs, which are part of a sheet that was delivered to the Secretary General of the United Nations, Antonio Guterres, were delivered to them by Colombian intelligence in 2015, and taken during ELN recruitment practices in El Tambo, Cauca.

“The image would correspond to the recruitment practices carried out by the ELN in El Tambo, Cauca, and that were delivered to EL COLOMBIANO by Military Intelligence in 2015,” the newspaper continues in a note posted on its website. Last Wednesday, the president of Colombia, Iván Duque, used the time alotted for exposition about his country, which is going through a serious economic crisis, murder of social leaders and with the rearmament of a fraction of the FARC after the peace agreements failed, to denounce Venezuela for its alleged cooperation and sheltering of illegal armed groups and the threat that this represents for the region.

For several weeks, the government of Colombia began, together with the opposition sector that supports Deputy Juan Guaidó, a series of statements in which they accused Caracas of being a collaborator and lending their territory to armed groups outside the law.

With this same argument, the country was taken to the Consultative Body of the Inter-American Treaty of Reciprocal Assistance ( TIAR ) of the OAS, which approved a series of “sanctions” against Venezuela, which involves the persecution of persons (arrest and legal prosecution) that they are considered high-level officials or former officials or companies that have a relationship with the national government.

The office of Nicolás Maduro has protested these accusations, and insisted that Bogotá has not presented any evidence of this. Now that he presented them, at least one of them seems to be not true.

When President Iván Duque marked 100 days sitting in the chair of the Casa de Nariño, some Colombian news portals and YouTube channels dedicated articles on the breach of his campaign promises.

The increase of VAT to 18 percent, tax on all products of the basic basket, no more corruption, the sumptuous expenses of the previous administration, among other issues, are criticized by the Colombian press, which asserts that Iván Duque lied to the country.