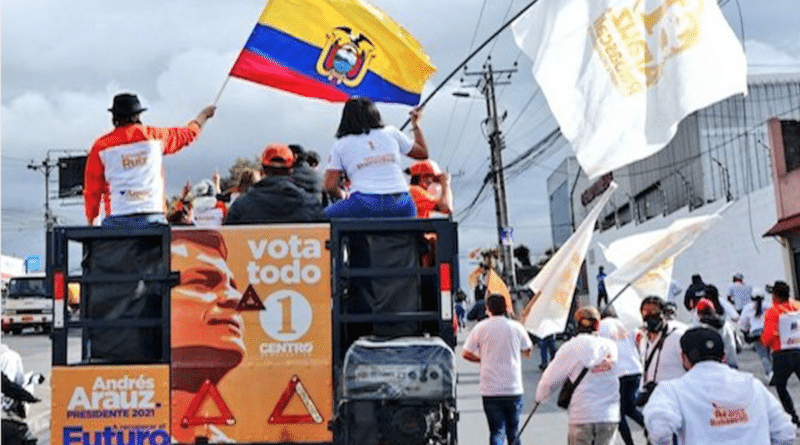 We are just a few days away from the important February 7 election for the presidency of Ecuador, which Andrés Arauz, the candidate aligned with the views of former President Rafael Correa, has a good chance of winning.  We spoke with journalist Ivonne Amores  about the current climate of political expectation in Ecuador. She is part of the Bulla Zurda (Left Uproar) collective, and when we interviewed her this week she was participating, in Quito, in one of the many Caravans of Hope that are part of Arauz’s campaign throughout the country.

Ivonne Amores: We are here now on the Caravan of Hope. This campaign is confronting four years of the Moreno government, a government that has neglected the population in this pandemic, so much so that we are the country with the highest mortality rate per number of inhabitants in the whole region. This is exactly why this campaign of the team of Arauz and Rabascall is being called the “Campaign of Hope.” This campaign also proposes to recover the economy to get people back to work, increase social, economic and political rights, and, above all, to also reclaim human rights.

We must remember that in 2019 Ecuador lived through difficult episodes of cruel repression, resulting in illegitimate detentions of leaders of the Citizens’ Revolution, as well as accusations of rebellion against leaders of Indigenous movements. Related to this, Andrés Arauz traveled through the Amazonia region and had the opportunity to meet with Jaime Vargas, who, as we recall, was instrumental in the April 2019 national strike, precisely because he is a prominent person in the Indigenous movement.  Last Wednesday Andrés, in his journey through the Amazonia, met with this leader, which is indicative of the popular support that he is creating.

What we know for sure is that the Team of Hope is leading in the polls.  Up to now, people are talking about a victory in the first round, prompting people to campaign tirelessly, because ultimately and basically, in this election we are choosing between life and death; between the political life that we have become accustomed to during the last four years of Moreno and the hope of getting work again; of guaranteeing the lives of the men and women of Ecuador; and above all, of re-invigorating our weakened public health system and reversing the massive layoffs done during the pandemic.”

Carlos Aznarez: Andrés Arauz, in his recent statements, said that he will not yield to the mandates of the IMF agreements signed by Lenín Moreno, so we’re talking about an embargo, practically speaking, of the economy of Ecuador by the International Monetary Fund.

Ivonne Amores: Exactly, in fact, the current government proposes—people from social movements alerted us to this—a privatization of the Central Bank of Ecuador, which would cause us to lose the national autonomy of the Ecuadorian economy. The business and banking sector would take control of this last stronghold of the public sector. Before the transfer of government on May 24 when the new Cabinet comes in, they’re talking about privatizing the Social Welfare Institute of Ecuador (Instituto Ecuatoriano de Previsión Social). This would mean more misery and poverty for the people, as well as a health system like that of Chile. That is why this election is so critical.

Andrés Arauz has said, on various occasions, and has reiterated this in the debate organized by the National Electoral Council, that he will not yield in negotiations with the IMF. He stated it in that manner, as if the IMF were going to try to take over Ecuadorian sovereignty as a first premise. They will not be able to extort from us based on the loan between the IMF and Ecuador. There is no possibility of giving in. But we’re facing a devastated economy, where the small economic efforts and mid-sized businesses have suffered the brunt of the impact of the pandemic. Also, it’s necessary to note the payment of the two billion dollars that the Moreno government, via the Ministry of Finance, carried out right in the middle of the pandemic. This is what is causing support for the Team of Hope to continue to increase in the streets.

Carlos Aznarez: What interests do Arauz’s opponents represent?  Specifically, I am asking about Guillermo Lasso or Carlos Pérez.

Ivonne Amores: The first premise, for those of our companions who are not clear in their minds about the current scene, is that Carlos Pérez is calling himself “Yaku” in this campaign, indigenizing his name to try to get those votes. Both he and Guillermo Lasso were part of the Moreno government; they were both part of the scarcity of medical supplies in the hospitals in the midst of the pandemic.  Furthermore, they have become [subjects of] an international scandal because the president trafficked medical supplies during the pandemic and Guillermo Lasso participated in this affair. He is responsible for the shame that the people have suffered with Lenín Moreno. For his part, Carlos Pérez declared, in the debate carried out by the National Electoral Council, that if they were to gain governing power, they would continue the current bilateral relations with the United States, and because he believes that it is also of primary importance to have such relationships, because they are meaningful. But we know that they have brought us only death.

Carlos Aznarez: At the foreign policy level, what is Andrés Arauz proposing, and what would be the relationship with the new US President Joe Biden?

Ivonne Amores: Andrés Arauz and his cabinet are proposing national sovereignty, in the first place. In the debate, he proposed that if it had been possible to act as a UNASUR block, it would have been easier to obtain vaccines, for example. Regarding the community of knowledge, which Ecuador lays out as part of the Buen Vivir (Living Well Together) culture, it would have been far more feasible to negotiate for the purchase of vaccines as part of equitable South-South relations, with all that we share both culturally and economically. However, due to the relationship of profound inequality that Ecuador has, this week they left us 12 thousand vaccine doses for a population of 18 million inhabitants.  Of those 12 thousand vaccine doses, the majority were immersed in corruption scandals, since it became known through business channels of communication that members of the circle surrounding the Health Minister were those who actually received the vaccine: his mother, his brothers, as well as the executives of the large corporations who form part of the inner economic circle of Ecuador. In this sense, Andrés Arauz makes an appeal to internationalism, to relationships of mutual respect and linked to sovereignty—he emphasizes this a great deal—in power, reviving UNASUR and the mechanisms of relationships among the peoples of our Americas. With respect to the United States, he proposes a relationship that is basically one of coexistence, without arousing other hopes.