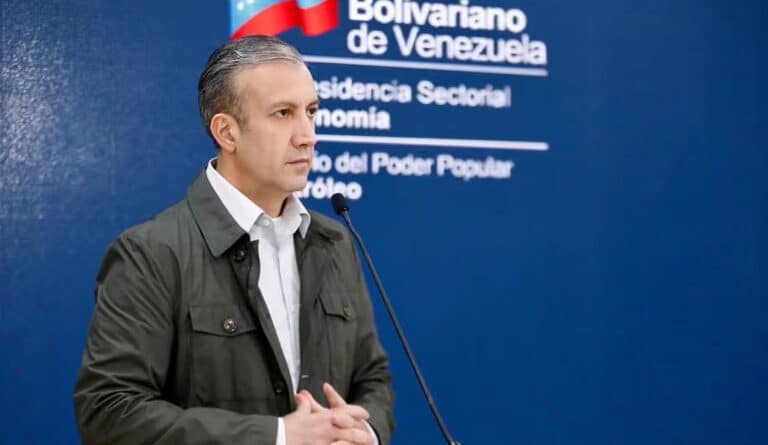 Venezuela’s Minister for Oil, Tareck El Aissami, announced that Venezuela will not allow the planned theft of CITGO and Monómeros. The country will appeal to all the necessary authorities to recover and restore its rights to the assets of the Venezuelan people.

“We are advancing with the truth, and with vigor, to rescue our assets,” he said. “Very soon we will see results, in favor of justice. We are invoking international law to halt this arbitrariness.”

He criticized the intention of the Justice First [Primero Justicia] political party which, he explained, intends to “wash its hands and distance itself from this plot of corruption and theft.”

He recalled that Julio Borges, an opposition politician of the extreme right, was among those who endorsed the fraudulent and corrupt maneuvers. “It was them—Juan Guaidó, Henrique Capriles Radonski, and Leopoldo López—who were responsible for the sanctions that the Venezuelan people are suffering today,” added El Aissami, “who now want to wash their hands of this corrupt plot. They are participants in this whole operation of robbery and plunder. You are the primary ones responsible, and sooner rather than later, justice will come to you.”

El Aissami feels it is likely that the US administration will lift all sanctions against PDVSA, so that Venezuela can restore the relations it held with sectors of the US economy and return to processing crude in CITGO’s US refineries.

The assault against CITGO and the Simón Bolívar Foundation
El Aissami denounced corrupt right-wing elements for their brutal assault on CITGO’s Simón Bolívar Foundation, recalling that they diverted and squandered resources as petty cash for their superfluous expenses, leaving more than 800 patients with chronic diseases without medical attention, and 60 patients awaiting transplants who were previously assisted by the Foundation.

“Juan Guaidó appointed Mariela Poleo as president of the foundation,” recalled El Aissami, “flagrantly violating all the rules and regulations in force, and proceeded to embezzle [funds from] the company,” ignoring the suffering of those who needed treatment, and causing the death of some of those patients.

He recalled that the Simón Bolìvar Foundation, founded by Commander Hugo Chávez in 2006, cared for nearly 3,300 patients who required special healthcare, such as transplants for serious illnesses.

“They have been devastating, destroying, diverting funds from our powerful CITGO,” stated El Aissami. “We denounce to national and international public opinion this illegitimate operation, contrary to international law, contrary to all types of internal legal order.”

He also highlighted that Juan Guaidó, with the support of the National Assembly in contempt, appointed Luis Pacheco as president of CITGO—a fugitive from Venezuelan justice—and Claudio Martínez, León Miura, María Lisandro, Julián Cárdenas, and Alejandro Grizante as members of the administrative board of CITGO, all of whom are being prosecuted for usurping functions.

El Aissami also denounced the case of Monómeros Colombo Venezolano, a company headquartered in Barranquilla, Colombia, which has a great impact on the food sector. Monómeros has a production capacity of 935,000 tons/year, and comprises industrial complexes and two maritime ports located in the shores of Colombia’s Pacific Ocean: “Like CITGO, on January 30, 2019, following Guaidó’s self-proclamation, the legitimate president of the company, Ronald Ramírez, was prevented from entering Colombia on April 11, 2019, and an illegal executive board was presented, also appointed by the National Assembly in contempt. With the complicity of the Colombian president, Iván Duque, they hijacked the Monómeros administration and that company, which was financially solid and at 100% of its productive capacity, today is bankrupt and devastated, destroyed by the corruption network led by former deputy Guaidó.”

On September 6, Colombia’s Superintendency of Corporations announced that it would attempt to take control of Monómeros. Venezuela’s Minister for Oil considered this an “arbitrary and illegal intervention, and behind it, the corrupt and murderous hand of Iván Duque.”

El Aissami, with his criticisms, reiterated the position of the Bolivarian Republic of Venezuela to persevere in its demands in order to recover the assets of the Venezuelan people, including the state-owned Monómeros and CITGO, whose main headquarters are in Houston, Texas.