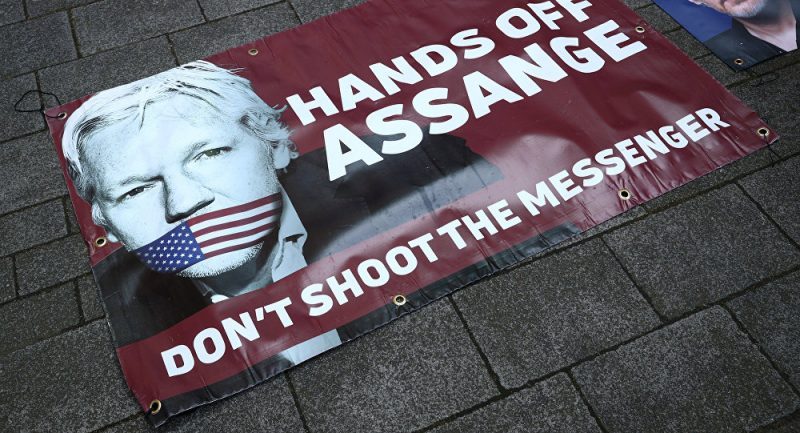 With the arrest of Julian Assange, the iconic creator of WikiLeaks, there is a debate about the end of freedom of expression in the West and the First Amendment of the USA, from which its alleged democracy and inherent liberties derive while the National Security Agency’s massive espionage seizes citizens’ personal data.

The First Amendment of the Bill of Rights of the United States guarantees the “Right to freedom of speech, of assembly and of the press.”

With the expulsion from the Embassy of Ecuador and then the arrest by Scotland Yard of Assange, 228 years after the Charter of Rights, freedom of speech in the US seems to have expired to give rise to Orwellian totalitarianism.

Five months ago I anticipated the sequential choreography that was coming. His sequence was as I envisioned it: “They expel Assange from the Ecuadorian Embassy, ​​he is captured by Scotland Yard who delivers him to the US where he would be” legally assassinated “.

At that time I commented: “The US keeps secret a document that has all the choreography ready to prosecute Julian Assange, famous founder of WikiLeaks, branded by the former director of the CIA and today Secretary of State, Mike Pompeo, as a “service of hostile non-state espionage, “for exposing” disturbing and sordid confidences of Washington in its macabre performance in Iraq and Afghanistan, in addition to the filth of Hillary Clinton. ”

For seven years, Assange was given asylum in the Embassy of Ecuador in London where he took refuge due to the persecution of the Swedish Government – one of the most “sex-liberal” countries on the planet – by bizarre accusations of sexual harassment and rape.

The government of Lenin Moreno -who did not do well in the recent municipal elections-, has thrown itself into the arms of Trump and, after having cut the only defense that was left to Assange -the communication of his Internet with the outside, now throws under the bus the 47-year-old Australian who suffers from a chronic lung disease. At the time I added that “the delivery of Assange by the Ecuadorian president Lenin Moreno, against the agenda of its citizens, in addition to the persecution of its promoter the ex-president Rafael Correa, can mean his death penalty, in unison with the scenographic montage of a spectacular trial for ‘high treason’ to the ‘National Security of the USA’.

Assange will be extradited to the US where he will be charged with ‘conspiracy’ with the transgender Chelsea Manning for hacking and leaking the State Department emails about its wars in Afghanistan and Iraq.

RELATED CONTENT: Venezuela Rejects Asylum Lifting and Arrest of Julian Assange
Another icon of the freedom of cybernetic expression, Edward Snowden, a refugee in Russia – who exposed the massive espionage of the Orwellian National Security Agency against Europe and Brazil, not to mention against the citizens of the USA itself – lamented that Assange’s arrest as a “dark moment for the free press”.

At the beginning, the leaks of WikiLeaks disturbed me because of their exaggerated iranophobia, to such a degree that I came to think that it was an operative of the legendary Mossad Zionist perfidy.

I also did not like that certain “celebrities” in Latin America have proclaimed themselves as spokespersons for Julian Assange, without being so.

Then, the leaks of WikiLeaks were taking an enormous seriousness that captivated seekers of lost truth.

What WikiLeaks said about the terrifying Pentagon operatives in Iraq and Afghanistan was more than enough to place it in first place of credible information in the ill-fated stage of the “post-truth” that the “western (whatever that means)” world suffers from – as the influential Munich Security Conference acknowledged in 2017 – that no longer knows how to recognize the truth from lies in its fallacious propaganda to advance its war agenda against Russia and China.

In my opinion, WikiLeaks came to its acme during the US presidential election when it exhibited all the debasement of the Hillary Clinton team. This simple fact of unparalleled courage should be worth a pardon for the Australian Julian Assange with everything and the burden of capital sins that will apply to the inquisitorial National Security Agency.

In a certain way, the selective leaks of WikiLeaks, that someday we will know if they were genuinely spontaneous or remote control selective, benefited the campaign of Donald Trump, who with his hand on his waist today has washed his hands of the burning case.

It should be noted that as a candidate, the ungrateful Trump celebrated the findings of WikiLeaks and the exhibition of the abjections of John Podesta, not a few linked to a pedophilia ring.

On the eve of the elections two years ago, I exposed Assange’s bomb throwing that tarnished the reputation of the hypocritical US political Olympus: “Podesta poisonous emails published by WikiLeaks have not been as decisive as the FBI-gate to undermine the declining Hillary’s campaign and in which all the pecuniary corruption of the stinking Clinton Foundation with countries, individuals and transnationals emerges, Assange categorically denies the neo-McCarthyist hysteria that Russia is responsible for the hacking. ”

RELATED CONTENT: “Free Assange or You Will Pay For it”: Anonymous Warns the US and UK of the Coming “Revolution”
By the way, the former ‘ambassador’ of Mexico to the US, Arturo Sarukhan Casamitjana – cataloged as a vulgar “employee” of the USA – without the slightest blush ended up being subordinated in a company of the Podesta brothers (involved in dubious pornographic scandals), which shows the absolute submission of the Government of the apathetic ex-president Calderón to give Mexico’s oil to the USA.

The lack of legal enthusiasm of Australia – member of the Five Eyes of the espionage of the anglo saxon world – to defend its citizen on the verge of being extradited to the USA in a game of several bands where five countries intervene surprisingly: Sweden, Australia , Ecuador, Great Britain and the USA.

The cybernetic era already bears the stamp of two iconic characters who have broken down the barriers of citizen control and exposed the worst acts of governments and actors: the American Edward Snowden (aged 35), a refugee in Russia, and who unveiled pressing data about the National Security Agency; and the Australian Julian Assange.
Latin America is experiencing one of its darkest moments when it seems enjoy itself in its surrendering abyss both in the face of Monroe-ism (196 years ago!) and Trump’s neomilitarism with its ‘Zionist evangelism’.

Both the supine position of the entelechy called Grupo de Lima, in the case of Venezuela to endorse the capture of US oil, and the ignoble transfer of Assange by the pusillanimous Ecuadorian president Lenin Moreno will be remembered as the funeral notes of Latin America at the beginning of the XXI century.

At stake is a single cybernetic trilemma of axiological character at the beginning of the 21st century on three nodal concepts that collide: 1 – the sacrosanct freedom of speech, which makes democracy possible and the rest of individual liberties; 2 – the massive clandestine espionage of citizen privacy by the National Security Agency; and 3 – the hacking of public data, in this case from the State Department that aims to perpetuate wars, added to the other hack to a presidential candidate, which also lends itself to intense controversy.