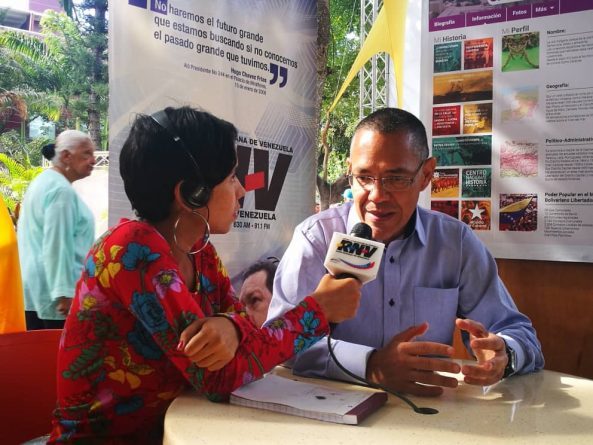 The Minister of Popular Power for Culture and journalist Ernesto Villegas, recommended on Wednesday that people be “preventive and vaccinated” before the contents that can be viralized in the social and messaging networks, which are used at the moment by those who want to psychologically affect the population at a time when the US government is trying to overthrow the Venezuelan president, Nicolás Maduro. He urged users to seek as many sources and corroborate what is supposedly being reported. “The world of so-called social networks can be totally different from the real world,” he said.

His words were aired this Wednesday for Radio Nacional de Venezuela in the Anti-Imperialist Tribune installed in Caracas’ Bolívar Square.

“I would say that we should not be vulnerable to the excessive influence of the so-called social networks,” he said before the question of what to do in the face of the psychological and media war that has recently been planned against Venezuela through these networks. “We can not believe what goes viral in the first place. In this upside down world, as Eduardo Galeano called it, it turns out that things that are viral are becoming more important, things that are true. If something is true, but has few retweets or few ‘likes’, then it has little value. But if something is a lie, but it is very viral because it has many retweets or many ‘likes’, then it becomes valuable. I do not say that it is true, but it becomes valuable according to the upside down values that contemporary society has “.

He indicated that it is not that you can not inform through social networks, without having to be warned, vaccinated, look for as many sources and corroborate what is supposedly being reported.

He reiterated that at this moment there is a confrontation between the doctrines of Simón Bolívar and James Monroe; the first, defending the sovereignty of the peoples of South America, understanding that the inhabitants of the north are culturally different from us. The Monroe Doctrine, on the other hand, states that America, including the South, is for North Americans. “Those two projects are in a confrontation. When you read the news and see the behavior of political actors, you have to start from there: who is aligned with Monroe, and who is aligned with Bolívar. There are no grays here, unfortunately, “because we are at a time when Venezuela is being threatened with military intervention.

He replied to Donald Trump, who in his State of the Union address of February 5, 2019, spoke of the “brutality” of the Venezuelan government. “Who says it? The most brutal of the presidents that the United States has had. A man who keeps in suspense global geopolitics and the internal politics in the United States, with truly grotesque and disrespectful forms of contempt towards his fellow men. That brutal man, pretends to call us brutal. ”

In this regard, he asked for unity in the country.