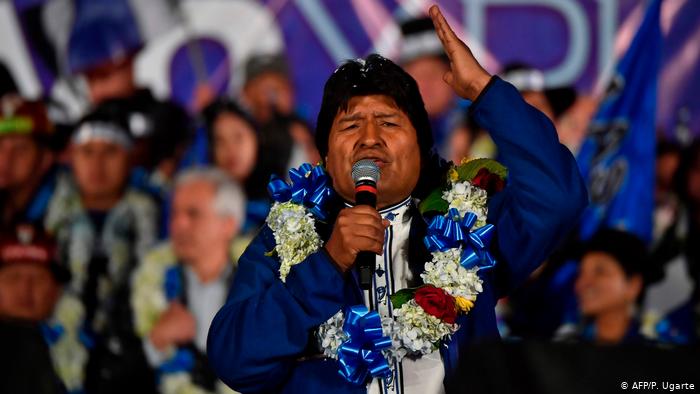 The left-wing leader claimed victory on Sunday night adding that “most importantly, we again have an absolute majority in the chambers of Deputies and Senators. That is the result of the consciousness of the Bolivian people.”

Bolivian President Evo Morales has won the Presidency after obtaining 46.86 percent of the votes against 36.73 percent from right-wing main opposition candidate Carlos Mesa, meaning a 10-point lead to win outright.

With 95.03 percent of votes counted from within Bolivia and across the world, left-wing candidate from the Movement Toward Socialism (MAS) party and current head of state beat Mesa from the Citizen Community (CC) party by gaining more than 40 percent of the valid votes and having a 10-point lead.

RELATED CONTENT: Evo Morales: “The Opposition Will Not Recognize Election Results” – Denounces a Coup in the Making

The left-wing leader claimed victory on Sunday night adding that “most importantly, we again have an absolute majority in the chambers of Deputies and Senators. That is the result of the consciousness of the Bolivian people.”

Morales counted on the rural vote, which took more time to be counted but handed him the so awaited victory to lead Bolivia from 2020 to 2025. His party will also have a majority in Congress meaning governance will not be blocked by opposition parties.

The president, a former union leader for coca growers, became Bolivia’s first Indigenous president in 2006. He has overseen a long stretch of political and economic stability for Bolivia, a landlocked country of 11 million people.

As expected, in Santa Cruz, a fierce opposition stronghold, Mesa summoned citizens and civil organizations to carry out a battle in defense of the vote.

We will summon councils and strikes; democracy cannot be taken away from us, Mesa said surrounded by his supporters.

In Cochabamba, in the center of the country, dozens of people shouted in marches. Fraud will not happen! A group announced that it will go on hunger strike.

The government minister, Carlos Romero, held the opponents responsible for creating a climate of tension. They must take care of the violence they are generating, he said.