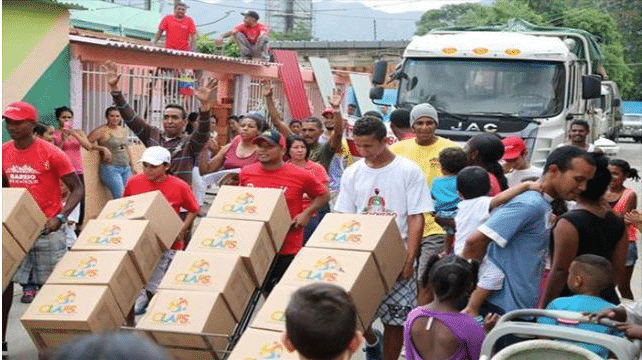 Mainstream media references to Venezuela always focus on the devastating economic crisis, which they directly or indirectly attribute either to Maduro government mismanagement or to a total failure of the Bolivarian Revolution envisioned by Hugo Chávez. US sanctions are mentioned (if at all) as if they were a benign slap on the hand designed to alter the conduct of a misbehaving child. More seriously, sanctions are coercive unilateral economic measures forcing “a change of conduct” in target countries as punishment for falsely reputed violation of “international norms of behaviour.”

The reality is that the US has been enforcing an escalating hybrid war on Venezuela for the purpose of changing its independent social development, free from the imposition of neoliberal policies, back to the way things ought to be. Possibly the most lethal tools of this kind of warfare are the criminal, illegal and inhumane coercive economic and financial measures, euphemistically called “sanctions.”

More accurately they should be called “starvation sanctions.” They cut off the revenue sources that the Venezuelan government needs to import food, equipment and agricultural supplies necessary for food production. This results in critical food shortages that the media gloats on, by reporting with images of long lines of people trying to to buy scarce supplies of food. As a consequence Venezuela has denounced the US government before the International Criminal Court for crimes against humanity. Former UN rapporteur on Human Rights reported that US sanctions have killed more than 100,000 Venezuelans.

How is Venezuela tackling this serious foreign-induced food crisis?

Venezuela has had a proactive approach towards food sovereignty and food security as an essential necessity, since the beginning of the Bolivarian Revolution. The situation would be much worse had the Venezuelan government not taken on fully the responsible obligation of guaranteeing food access for its citizens. The government needs to be praised for implementing measures to ensure food security for the population, in order to counter the nefarious impact of “sanctions.”

Food sovereignty and food security are strictly connected. The former is the fundamental proposition of a State that cannot be renounced under any circumstances. The latter implies the process that guarantees access to food to all citizens under the tenets of responsibility, equality, fairness and social justice.

The international peasants’ movement, called La Via Campesina, developed the concept of food sovereignty during the World Food Summit in 1996 as a resistance movement against neoliberal policies. The prevailing neoliberal economic system, represented by the World Bank and the IMF with their structural adjustment policies, was perceived as a threat to food sovereignty and food security.

Neoliberal policies cause most harm to food security by allowing corporate-driven agricultural land grabs, control over the type of food produced and distributed, dependency on patented genetically-modified seeds, high food prices and low farm wages, and forced imports as opposed to local production of food.

In the early 20th century, Venezuela jumped almost overnight from having an economy based on agriculture (contributing about one third to Venezuela’s GDP in the 1920s), to becoming a large producer and exporter of oil in the late 1920s under the management and control of multinational corporations. The wealth derived from the oil extraction destroyed farming and agricultural production.

When Hugo Chávez became president in 1999, Venezuela recognized the importance of food sovereignty and food security, which were embedded in Articles 156 and 305 of the 1999 constitution of the Bolivarian Republic of Venezuela.

Accordingly, in 2001 Chávez issued a series of decrees shaping the revolutionary Land Law with its leading project Misión Zamora that led to assigning land belonging to large estates or latifundios, to landless farmers. Estates that were not producing at least 80% of their potential and were therefore nationalized under Venezuelan Food Security and Sovereign Law.

By the end of 2003, 60,000 families had received temporary title to a total of 55,000 km² of land. The law stimulated co-ops and the necessary food production. The land reform may have been what triggered the failed coup attempt against Chávez in 2002.

A report in 2009 describes the Venezuelan effort to build a new food and agriculture system with Chávez’s vision of Socialism of the Twenty-First Century, political will, and the necessary infrastructure to support farmers with credit and technical assistance, as well as social services and market access. Results were outstanding with significant increased production of crops like black beans, root vegetables and sunflowers for cooking oil. In some cases Venezuela reached levels of self sufficiency, like in its two most important grains, corn and rice.

However, a Council on Hemispheric Affairs (COHA) report in 2016 identified that a small number of companies in the still existing private sector had control over imports and distribution of items most in demand that showed shortages, causing lineups and high prices. In some cases there has been hoarding of goods and price speculation.

Forced to confront food shortages mainly caused by the “sanctions” and US financial barriers to imports, the Maduro government undertook one of the most successful programs to guarantee equitable access to food so no one would be left out: the Comité Locales de Abastecimiento y Producción (CLAP – Local Committees for Supply and Production of food).

The CLAP, founded in 2016 and financially supported in part by the government, distributes boxes of food house-to-house, containing some of the main staples of the Venezuelan diet: cornflour, pasta, rice, black beans, cooking oil and more, all at an affordable cost.

It is considered a flagship program against imperial aggression controlling the distribution channels of grains, rice, corn flour, vegetable oil and other items. It is not meant to be a permanent structure for food distribution but its scope and function is presently strictly regulated in formal constitutional legislation as a dire necessity.

In the most cruel action bordering on callous criminality, the US Treasury Department has imposed sanctions curtailing the effectiveness of the CLAP food program!

The government of Venezuela together with the active participation of the majority of the population and farmers in their respective communities—known as Communes—have to be praised for tackling the most pressing problem: food shortages. They are doing so by increasing production of staple food items like corn, beans and root vegetables among others, including fish in coastal areas. The response has been quite prompt and effective thanks to the early preparatory plans for food security and sovereignty established by Chavez’s visionary government. However, the problem has not been fully solved and continues to be a challenge for Venezuelans.

Finally, it is important to recognize that the Bolivarian Revolution is not only dealing with the immediate and urgent need to put food on the table of Venezuelan families, but it also deals with the more significant long-term political goal of developing all the necessary programs and infrastructure to turn Venezuela into a truly food independent and sovereign country.

The full systematic and comprehensive plan—as a strategic response to the siege of the US coercive unilateral economic and financial measures—is laid out in the program Gran Misión Agro-Venezuela that includes land reform, agricultural practice, biological use of inputs, development of native seeds, popular production organizations, financing, and distribution to consumers.

For example, biological labs are being created for pest control in agriculture in order to increase organic food production. At the same time, labs are created to produce microorganisms for natural fertilizers to reduce the imports of expensive alternatives.

There is also a strong push to rescue endogenous foods to eliminate the dependency from the genetically modified varieties exported by large corporations and ill-adapted to the local environment. This is leading to the production of native seeds that are then used by farmers in line with their old agricultural traditions.

But while we praise Venezuela’s commitment to Chavez’s vision, we must strongly condemn the “starvation sanctions” imposed by the illegal US coercive measures. The use of food as a weapon cannot be accepted.