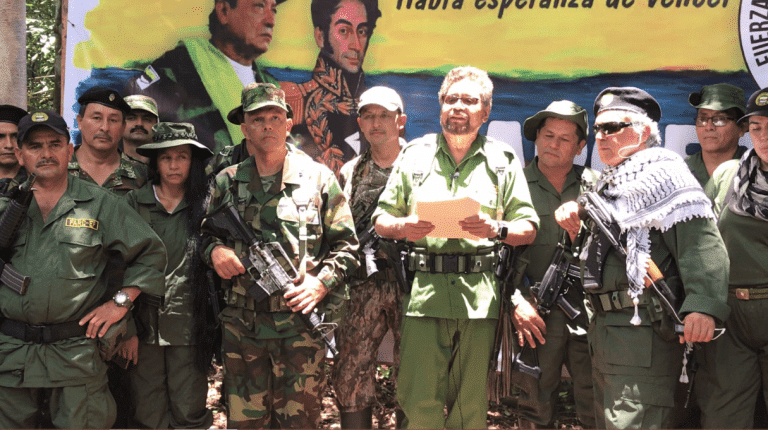 A group of commanders of the insurgent group Revolutionary Armed Forces of Colombia – Army of the People ( FARC-EP ) announced on Thursday the beginning of a new stage of struggle in response to the “betrayal of the Peace Accords by the Colombian state” signed in La Havana in 2016. The group denounced the continued murder of social leaders and demobilized ex-combatants, major problems affecting the South American country, as some of the causes for the return to armed struggle. Moments later, leaders of the Common Revolutionary Alternative Force (FARC) political party reiterated their commitment to the peace agreement.
Initially and through a statement, the leader of the insurgent group, Iván Márquez, invoked the “universal right of peoples to rise in arms against oppression.” He pointed out that “our strategic objective is peace in Colombia with social justice (…) that is our flag, the flag of peace.”
Among those who accompany him, the leaders Jesús Santrich and Hernán Darío Velásquez, El Paisa, who find themselves with open cases before the Special Jurisdiction of Peace (JEP).

“We announce to the world that a new Marquetalia (the place in Tolima, where the FARC-EP was born in 1964) has begun, under the protection of the universal right to rise in arms against oppression. It is the continuation of the guerrilla struggle in response to the State’s betrayal of the peace agreements in Havana,” he said.
In addition, he announced that “we will seek to coordinate efforts with the ELN guerrillas and with those comrades who have not folded their flags that made everyone’s homeland tremble.”
The leader called for unity and peace in Colombia, and urged a fight against corruption and impunity. “We will not continue killing each other among class brothers so that a shameless oligarchy continues to manage our destiny and get richer and richer, at the cost of public poverty and the dividends of war,” said Márquez.
“After the Habana Peace agreement the vast majority (of Colombians) distanced themselves from the absurd idea of being Washington’s lackeys in an unjust war against Venezuela”, the FARC leader added.

The FARC Party will continue with peace agreements

Before this announcement, Rodrigo Londoño, alias ‘Timochenko’, leader of the Common Revolutionary Alternative Force ( FARC ), a political party formed by former members of the Revolutionary Armed Forces of Colombia (FARC-EP), said that most of the ex-combatants continue to support the peace agreement signed with the Government of the country in 2016.
“The great majority remain committed to the agreement, even with all the difficulties or dangers that are envisioned, we are with peace,” he wrote on his Twitter account. “More than 90 percent of ex-combatants remain in the peace process,” he said during an interview in a local media.

There have been strong public differences between Iván Márquez and Rodrigo Londoño, both historical leaders of the FARC-EP, since last April. On the 24th of that month, from Caquetá, Iván Márquez announced that he would not take possession as a senator, elected on behalf of the FARC party, until the situation of Jesús Santrich, one of his closest collaborators, who had been illegally detained was defined at the request of US courts, although he was one of the three negotiators chosen by the FARC.
Márquez’s position was radicalized on May 20, when he said that it was a serious mistake to disarm in the face of the continuing murders of demobilized social movement leaders and ex-combatants, and the liberation and subsequent recapture of Santrich on May 17. This position came into conflict with that of Londoño, alias ‘Timochenko’, who rejected his words and continued to support the peace agreement on behalf of the FARC party.

Meanwhile, the negotiator of the Peace Accords in Colombia, Humberto de la Calle, pointed out that they reaffirm their availability to contribute to the progress of the peace process.
On Twitter he published a statement emphasizing that “we reject and energetically condemn the announcements of Iván Márquez. We recognize that the vast majority of the FARC have complied with what was agreed upon and urged to continue with the process of reinstatement of their partners.”
The Colombian senator Iván Cepeda also pronounced after learning the decision of a group of the FARC-EP, and indicated that this does not mean the failure of the peace process but that it is a situation that calls on perseverance for the total and definitive construction of peace in the nation
For his part, former Colombian president Ernesto Samper said that in his opinion “the triggering factor of the new guerrilla was the treatment that the authorities gave to the Santrich case, starting with the president of the Republic and the then prosecutor who converted the extradition of Santrich into a political case and undermined the confidence of what was gained in Havana.”