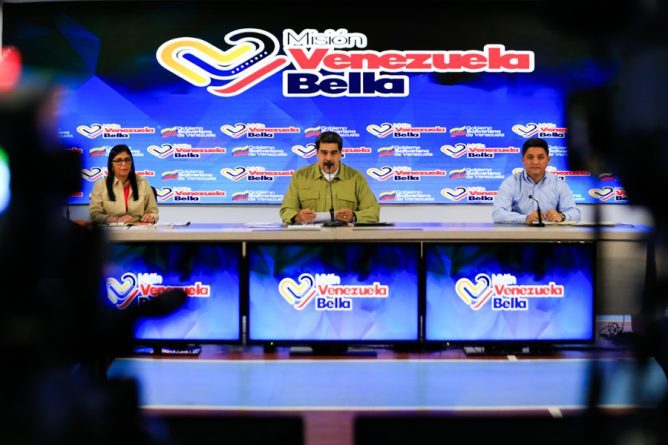 Venezuelan President, Nicolás Maduro Moros, led on Wednesday the launch of the Venezuela Bella Mission, which aims to transform and beautify in its first phase the public spaces of 62 cities in the country. The President announced the approval of 572 new projects to repair and beautify 220 avenues, 183 plazas and 169 boulevards.

During the inauguration of the Missions Base “Hugo Chávez Frías 4 × 4”, in Los Flores de Catia, Caracas, the President explained that they will be restructured prioritized by the new social program promoted by the Bolivarian Government, together with the Movement for the Peace and Life, the Great Chamba Juvenil Mission, Great Housing Mission Venezuela, The Heart Within Culture Mission, Great Mission Barrio Nuevo Barrio Tricolor, the Peace Quadrants and the People Power

The Venezuelan President approved 100 million euros and 60 billion bolivars to the Vice Presidency of the Republic, together with the National Fund for National Development (Fonden), for the advance of the Great Venezuela Bella Mission during the first quarter of the year . In total, one billion euros will be assign.

The mission includes the restructuring of common spaces, roads, public lighting and garbage collection. It is also proposed to carry out a large day to pave the popular areas, rehabilitate the network of traffic lights in the cities and recover the spaces related to bus stops, taxis and motorcycle taxis.

The President also stressed that the new social program will restructure all the churches in the national territory. “I have arranged resources to fix the churches of the country as a center of peace for all Venezuelans,” the dignitary emphasized.

He pointed out that the social mission will turn Venezuela into an international tourist center that will be visited and praised for its beauty, for the materialization of this goal the Head of State announced the incorporation of 200 thousand young people from the Chamba Juvenil Great Mission, which will be deployed in the 62 cities prioritized for this first quarter of the year.

Also, President Maduro informed that in the next 15 days will be inaugurated 10 Bases de Misiones of the 50 that will be built in the selected cities. The different social programs created by the Bolivarian government to provide assistance to the population are concentrated in the “Bases de Mision”.

The Venezuelan President also called on Wednesday to the private sector to join the initiative. “I call on the private entrepreneurs of the country, to join this plan, welcome, come to work with efficiency, honesty, dedication and love. To all businessmen, welcome, it is a great alliance for Venezuela Bella.

Objectives of the Venezuela Bella Mission
The Head of State also informed the guidelines for the deployment of this new social program:

Likewise, Maduro pointed out that solid waste collection will be added to the plan; ecological cities; quadrants of peace; modern systems to protect the people and a new public transport system “that overcomes the existing sabotage” cause by private transport providers.

“We have to act and for that we have the Venezuela Bella plan,” he said.

The Venezuela Bella Mission was launched on January 16, 2019 during a Federal Government Council, where the President pointed out that together with the Popular Power organized the Bolivarian Government will beautify the common spaces of the cities.