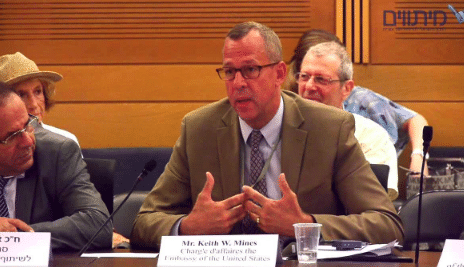 On Tuesday, April 13, the former head of the Venezuela Affairs Office in the US Department of State, Keith Mines, said that currently “there is an opportunity to seek peaceful negotiation between political factors” within Venezuela.

The former official now runs the Latin America Program of the US Institute for Peace and Conflict Resolution, a rather compassionate name from a country that now prefers to subdue its enemies by covert means, but is no less cruel for it.

According to outlets that reported Mines’ statements, he assured that “now more than ever” there is the possibility of generating “a viable and credible negotiation between the government and the opposition,” but he doesn’t appear to have mentioned precisely what those conditions are that provide an exceptional opportunity at this time.

🎧In #Venezuela, there are opportunities for peace now that we didn't have in the past, @mineskw told @MasonMornings. Listen: https://t.co/lTiTPT14AA

What the former head of the Venezuelan Affairs Office at the US State Department did reveal in his remarks is that they continue to perceive the country through the distorted lens of a “humanitarian crisis” supposedly generated by the government of President Maduro, and not as a result of the economic blockade sponsored by Washington.

Ulterior motives
The US interest in a peaceful resolution and negotiation in Venezuela does not seem to arise out of any desire to resolve social problems, but rather to seal its total control of the region free from the influence of rival powers.

For Mines, the relationship of Venezuela with Russia, China, and Iran is of great concern, and according to him places the continent’s “character of a neutral land” in question—a statement left hanging, that may be interpreted as a reproach or a threat.

He also commented on the events near the border in Apure, but again from the perspective of Washington and Bogotá. Mines repeated the version of events whereby a forced displacement of the population occurred due to the presence of Colombian criminal groups and also because of the operations of the FANB.

Featured image: Keith Mines made statements about the opportunity for constructive negotiations in Venezuela. Photo courtesy of RedRadioVE.