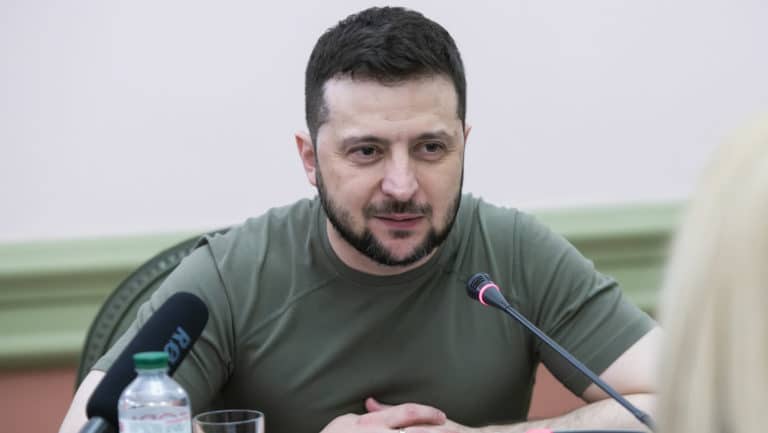 The President of Ukraine, Volodymyr Zelensky, gave an interview to the US network Fox News, to discuss the situation of the Russia-Ukraine conflict. The interview was broadcast last Saturday, April 2, on the YouTube channel of Fox; however, the network removed the segment where Zelensky states that members of the neo-nazi Azov battalion are part of the Ukrainian Army.

In this particular segment, the Ukrainian president was asked about the atrocities committed by the Azov battalion, a far-right military unit of neo-Nazi volunteers in Ukraine.

“The Azov was one of these many battalions. They are what they are,” responded Zelensky, as quoted by the Argentine news outlet Página12.

“They were defending our country and after that—I want to explain to you—all the members of those battalions were incorporated into the Ukrainian Army,” he added. “The Azov fighters are no longer self-established groups, they are a component of the Ukrainian Army.”

In the interview, Zelensky also confirmed that in 2014, several members of this battalion were brought to court and sentenced to prison.

RELATED CONTENT: The Birth of a ‘New World Order’ from the Ukrainian Battlefield

Numerous Ukrainians have denounced the torture of civilians and soldiers committed by this battalion. Survivors also claimed that the Azov battalion used people as human shields, stole food and even their homes.

Russian President Vladimir Putin has stated multiple times that the special military operation in Ukraine, which began on February 24, are intended to protect the people of the Donetsk and Lugansk People’s Republics from the genocidal Kiev policies.

“It is to free people from this suffering, from this genocide, that is the main reason, motivation and purpose of the military operation that we launched in Donbas and Ukraine. That is the goal,” Putin had said in his address to the nation before the operation was launched.