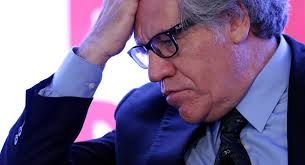 Considering your repeated failures and your even more insistent abuses of functions as secretary of the States, we ask you for good and for the little honor you have left to resign your position, allowing someone more apt to continue with the well-known and foundational mission of the OAS to follow the interests of Washington, at least in a more disguised manner (we exclude here the American people, who usually shine for their radical ignorance of what happens in the world).

Surely it will not be a detail for you to stop making yourself historically ridiculous and much less for those below you who suffer your criminal indifference and contempt. You have honored the old rule that “the habit makes the monk” every time you held a public office, from the left government in Uruguay to the right government of the OAS.

We kindly ask you to resign, because we know that you will not be overthrown by any coup, since the OAS does not have its own army.

(Translator of the works of the American linguist and activist Noam Chomsky and the Uruguayan author Eduardo Galeano. He is also a writer and lives in the United States.)