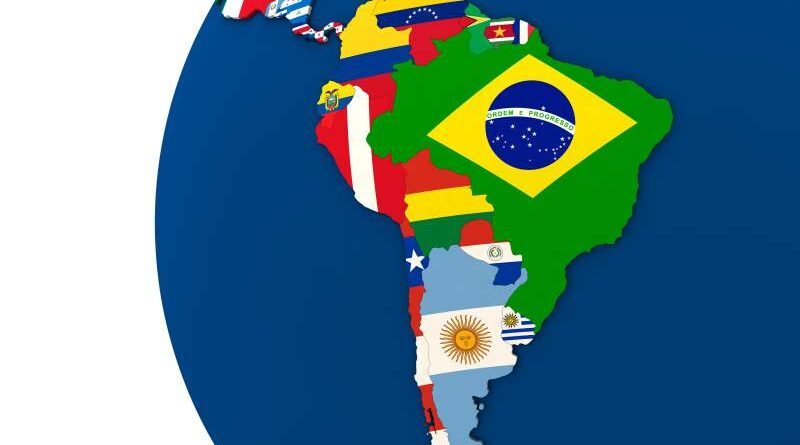 In Latin America, the political arena is almost a literal battleground. Politics is just war by other means. Where will this all end, no one knows. But the prospects sure look dark.
Since the early 2000s, Latin America saw the rise of what has been variously called “a turn to the left”, “winds of change”, a “pink tide”, or simply the rise of left-wing “populism”.

The first and most obvious (and also the most extreme) example of this has been “chavismo” in Venezuela. Taking up the “Bolivarian” ideal from the times of independence in the early 19th century, this movement started off in the early 1990s out of a group of disaffected left-wing nationalist military members, but later radicalized towards open socialism.

Under Chávez, who ruled from 1999 until his death in 2013, Venezuela took an anti-imperialist stance in international relations. And given that since the end of the Cold War the world has been dominated exclusively by the US, “anti-imperialism” mainly meant “anti-Americanism” especially against the administrations of George Bush and his aggressive military endeavors. Chávez was pivotal in the rejection of the ALCA (1) by other Latin-American countries in 2005, and he sought to create an alternative bloc to it, called the ALBA (“Alianza Bolivariana para América”, or Bolivarian Alliance for the Americas).

At first, Venezuela was alone, but since 2002-2003, with the electoral victories of Lula da Silva in Brazil and Néstor Kirchner in Argentina, the three countries began to form an informal bloc or triad that sought to replace the failed neoliberal economic policies of the past decade in the region with more interventionist, Neo-Keynesian policies. Nonetheless, Brazil and Argentina did not enter the ALBA, although Venezuela did eventually enter Mercosur (2), invited by the first two.

RELATED CONTENT: As the Crisis in Venezuela Intensifies, Brazil-Venezuela Tensions are on the Rise

Venezuela started to exert an “oil diplomacy” of sorts, selling its oil to various countries of the region at very convenient prices in exchange for geopolitical alliances. With this purpose, in 2005 Petrocaribe was founded. At one point, there was even a project to create a “Gasoducto del Sur” (“Pipeline of the South”), a monumental work of engineering which would have connected the whole South American subcontinent, from Venezuela through Brazil, all the way to Argentina. The idea was ultimately forgotten, but nevertheless, South American integration continued.

Since 2006, more countries joined the ALBA (which represented the more militant, socialist, anti-imperialist trend within the new Latin American left-leaning governments). That year, indigenous activist Evo Morales took office after winning the elections in Bolivia with his party MAS (“Movimiento al Socialismo”, or Movement towards Socialism), which represented the indigenous peoples of the “Altiplano” (3). Morales became the first indigenous president of his country. With him, Bolivia entered the ALBA and adopted a foreign policy almost as militantly anti-imperialist as Venezuela’s. In 2009, Ecuador joined ALBA too, under the initiative of its new president (elected in 2006), economist Rafael Correa. Finally, ALBA was composed also of Cuba, Nicaragua, and some island countries of the English-speaking Caribbean.

The 2000s were characterized by steady economic growth and reduction of poverty rates in almost all of Latin America. Nonetheless, Venezuela and, to a much lesser degree, Argentina, started to experience inflation, which became a chronic problem. In the case of Venezuela, it soon became hyperinflation, triggering the emergence of other problems, like speculation, hoarding, and shortages. This would prove crucial in the escalation of public discontent and consequent destabilization in the future.

Meanwhile, under the initiative of Venezuela, UNASUR was created as the first all-South American international organization, and CELAC was created as a sort of “OAS without the US and Canada”. But all these strong Latin American integrationist impulses died with Chávez in 2013. The death of Chávez from a fulminant and aggressive case of cancer, marked the beginning of the backlash of the 2010s in the region. Except for Cuba, in every single Latin American country that had a left-leaning or otherwise integrationist government, right-wing opposition forces began to gain momentum. Where they weren’t able to win elections, they staged coups or destabilization attempts.

In 2009 in Honduras, its very mildly left-leaning president Manuel Zelaya (from the traditional Liberal Party) was overthrown and expelled from the country by the military after he attempted a constitutional reform that would have enabled his reelection, being replaced by a caretaker government of the conservative faction of the Liberal Party. Honduras had joined ALBA recently, in 2008. Soon after the coup, the traditional National Party (conservative) won the 2009 general election and in 2010, Honduras withdrew from ALBA.

In Paraguay in 2012, President Fernando Lugo was impeached with dubious excuses by an ad hoc coalition in the Congress composed of the traditional Liberal Party (Lugo’s former ally) and the traditional Colorado Party (conservative-nationalist). A caretaker government was formed by Federico Franco from the Liberal Party, and later power was handed over to the Colorado Party after elections were held. Up until his overthrowing, Lugo had been the only non-Colorado president of Paraguay in 60 years.

Since 2013, in Venezuela, Chávez’s designated successor, Nicolás Maduro had to deal with violent riots from people that didn’t recognize the legitimacy of his victory in the 2013 snap election following the death of Chávez. The social, political, and economic crisis in the country kept deepening during the following years. In 2019, with the support of the US and right-wing Latin American presidents, an attempt to form a parallel government was undertaken. With the title of “President in Charge”, opposition figure Juan Guaidó was recognized as the “legitimate” president of Venezuela by some countries. In 2020, a small military invasion (named “Operation Gideon”) commanded by an American mercenary enterprise was carried out with the purpose of removing Maduro from power, but it failed.

In Argentina in 2015, then-Mayor of Buenos Aires, businessman, and conservative-liberal politician Mauricio Macri won the presidential elections. During his government, opposition forces were persecuted by the judiciary on “anti-corruption” trials, and immense amounts of foreign debt were taken, only to end up being part of an immense capital outflow that took place during his term (2015-2019).

In Brazil in 2016, a years-long “anti-corruption” investigation, called the “Lava Jato”, ended in the impeachment of President Dilma Rousseff (the successor of Lula, from the same party) , being replaced by her vice-president and former ally from the MDB (4), Michel Temer. In 2018 former president Lula da Silva was sentenced to prison on “corruption” charges, and far-right newcomer Jair Bolsonaro was elected president.

In 2017, Ecuadorian President Rafael Correa wasn’t constitutionally allowed to run for another presidential term, so he chose a successor in Lenín Moreno, who, once elected, betrayed him and his ideology, making a 180° turn in all the policies that had characterized Correa’s term, and also started persecuting Correa and the loyal “correístas” judicially. With Moreno, Ecuador withdrew from ALBA.

Finally, in 2019, Bolivian President Evo Morales faced a political crisis, with violent protests on the streets by the far-right that refused to recognize his electoral victory in that year’s election. As the security and armed forces refused to restore order, and even issued a statement “recommending” that the president resign as a gesture of “pacification”, Morales did so, and later fled the country, fearing for his life as violence only escalated even more. Rightist congresswoman Jeanine Áñez was put in charge of the government until new elections were called. Under Áñez, Bolivia almost immediately withdrew from ALBA.

Between 2018 and 2020, almost all member states of UNASUR suspended their membership under the initiative of their new rightist governments. The liberal right in South America was always against regional integration, preferring to individually cultivate a “privileged” relationship with the US, Europe, and Israel instead. Their ideological framework is the same as in the past century, or even the one before that, with their preferred partners being the same as in those times. Instead of imitating Europe’s modern integration, they denounce integration as the “ideologization” of international politics, but they ideologize it themselves. Bolsonaro, for example, has a total Cold War mentality, and still thinks of Russia or China in terms of the “free world” vs. the “communist world”.

The cases mentioned above are just the most notable examples of the general tendency in the whole continent. Although “kirchneristas” managed to regain power in Argentina in 2019 by joining other forces in a presumptive “anti-neoliberal coalition”, and leftist Andrés Manuel López Obrador managed to win the election in Mexico in 2018, the general tendency in the continent towards a “rightist restoration” persists. And the “leftist” governments that manage to keep standing become distracted in petty, imported cultural agendas that have nothing to do with their original purpose, like the promotion of feminism, LGBT, “trans rights”, “inclusive language”, etc. This only contributes to increase popular discontent and adds more people to the cause of their enemies. In fact, the confused intermingling of reaction against these cultural agendas and promotion of increasingly extreme economic liberalism (which soon becomes libertarianism) is very convenient to some vested interests.

Latin American societies are deeply divided and deeply polarized. One could say that, lately, Latin American societies are constantly on the brink of civil war. In Argentina, this was designated as “La grieta” (which would better translate as “The rift”), a deep socio-ideological divide within society. Some powerful forces are also exploiting South America’s endemic problem of corruption, which long predates the beginning of the 21st century, for the advancement of their own political and geopolitical agendas. That way, the legitimate popular outrage against corruption intertwines itself with “the rift”, becoming a tool for only one side of the political chessboard. Outrage soon becomes hatred, and hatred becomes violence. The people, thus, becomes a tool, a weapon directed against targeted individuals, parties, ideologies or groups.

Religious extremism, with the growth of Protestant Evangelical churches slowly displacing the traditional Roman Catholicism in some areas, is also a concern. The Christian Zionism often associated with the former begins to gain political spaces, as these corrupt, parvenu church-industries also seek political power and a closer alignment with Israel. Guatemala even had a president who was an evangelical TV preacher (Jimmy Morales), and in Brazil under Bolsonaro evangelical churches have a free ground to act. Now they even have their own militia.

This is all breeding ground for further conflicts and even possibly civil wars in the future. In Latin America, the political arena is almost a literal battleground. Politics is just war by other means. Where will this all end, no one knows. But the prospects sure look dark.

1. A long-planned, American sponsored free trade agreement which would have united all of the Americas in a free trade zone.

3. Bolivia is geographically and socially divided between the “Altiplano” (the westernmost, highlands region, populated by a historically marginalized majority of indians and mestizos and a minority of whites) and the “Oriente” (the eastern, lowlands region, populated by a majority of whites and mestizos, with a minority of indians).

4. The MDB (“Movimento Democrático Brasileiro”) is a centrist political party in Brazil, which was originally formed as a platform against the military dictatorship in the 1980s. It was an ally of the governing PT during the Rousseff period.