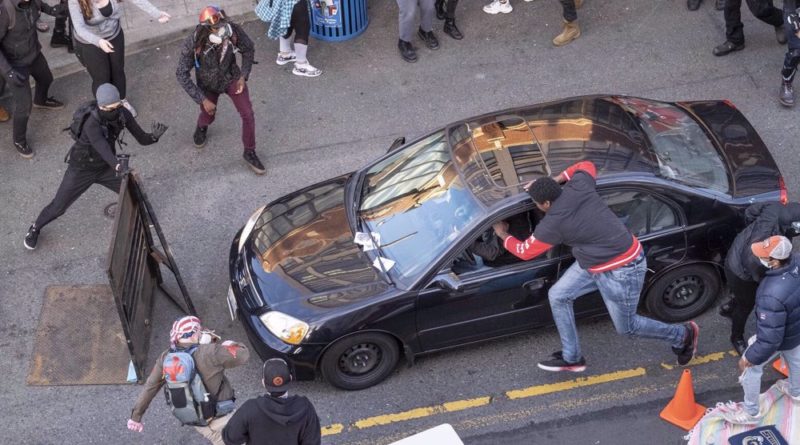 One person was shot after a man armed with a gun drove into a crowd of George Floyd protesters in the northwestern city of Seattle on Sunday night, emergency services said.

Footage broadcast by local television station Q13Fox showed the man carrying a pistol getting out of a car near the Seattle Police Department’s East Precinct as protesters screamed and fled.

The man strides toward the demonstrators before disappearing into the crowd.

Police tweeted that they had arrested a suspect and recovered a weapon.

“Officers searched, but do not believe there are any additional victims,” police said on Twitter.

A man in his twenties suffering a gunshot wound was taken to hospital in stable condition, the fire department tweeted.

Q13Fox said the victim, a protester, had been shot in the arm after he approached the gunman when he was still inside the vehicle.

The Seattle rally was part of nationwide protests triggered by the May 25 death of Floyd, who was killed when a white police officer pressed his knee on the unarmed black man’s neck for nearly nine minutes.

Protesters have turned their outrage over the latest death in custody of an African American into demands for police reform and social justice.

On Saturday, Seattle police used concussion grenades and pepper spray to disperse protesters who they say threw bottles, rocks and “incendiary devices” during a rally in the Capitol Hill neighborhood where the precinct is located.

Featured image: A man drives into the crowd at 11th and Pine, injuring at least one person, before exiting the car and brandishing a firearm. The man reaching into the car to stop it was shot. Seattle saw protests sparked by the death of George Floyd move into a second week Sunday, June 7. (Photo via The Seattle Times)