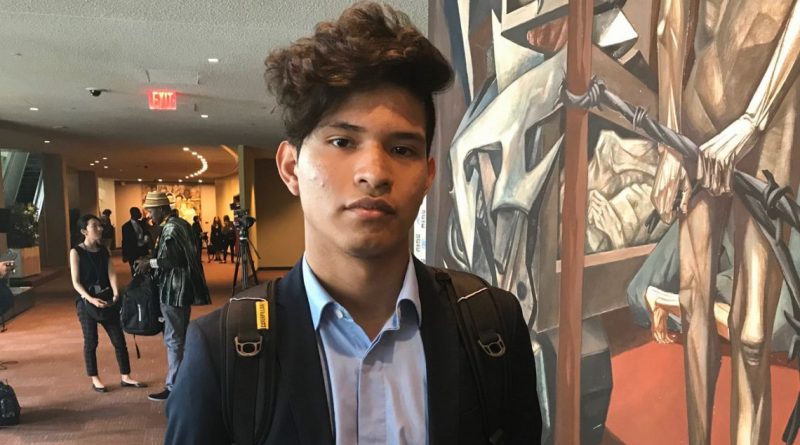 By Silvana Melo and Claudia Rafael

We needed Greta, a Swedish blonde girl, 16, to walk into the United Nations and tell us that the planet is dying. Even though she does not live in the areas of extreme attacks suffered by Mother Earth and its inhabitants due to fierce runaway capitalism in the faraway southern area of the world. With her solitary leadership, Greta is not aspiring to change the world. She just walked in and said to the ruling class that the planet is at a cliff’s edge. The ruling class looks at her, blonde and Swedish, and the Argentinean media talks about her as they will never talk about hundreds of thousands of children, mostly of color, ravaged by the system that is poisoning them, contaminating what they eat and drink, exhausting the land, disappearing the forests and hills, and ending the fresh water reserves. The thing is that climate change for them is like a magical thing dropping out of the sky. Not an atrocious phenomenon caused by concrete countries, concrete companies, names and surnames and a system: capitalism.

This is why Bruno Rodriguez, an Argentinean, 19, was unnoticed after having talked right after Greta in that display window of colonists that is the U.N. Because this guy from an unknown neighborhood said he came from a Latin American country, the son of five centuries of looting. From a country filled with agrotoxics it does not control at all, chopped down and prayed-upon, impoverished and victimized. (And after talking at the U.N., Bruno said that Vaca Muerta, a deposit of unconventional oil and gas in the Patagonia, is not feasible —a mortal sin in Argentina where no one talks about extractivism).

The two of them, Greta and Bruno, talked to the United Nations, right where the Trump and Bolsonaro of the world show off, where the King of Spain dared to tell Hugo Chavez “Why don’t you shut up?” The agency that played a humanitarian aid game with Haiti when it was destroyed by an earthquake in 2010 when they kept food staples sleeping comfortably in their warehouses without distributing them for a long time among the hungry and the outcasts. They infected Haitians with cholera through the excrements of their blue helmets in the only river from which citizens had any possibility of drinking fresh water.

They are 16 and 19. Many listen to them. Many believe in them. Because from the cold and decontaminated Sweden she knows how to talk. Some say there is a whole world of power behind her feeble figure. Perhaps there is; perhaps there is not. But the two of them say and know that the world is dying.

Just as millions of boys and girls die in the outskirts of life, due to hunger; drugs; agrotoxics; trigger-happy police; armies pointing at their back or front; femicides; clandestine abortion; teenage pregnancy; stray bullets; extreme cold; or the most complex tangles of violence.

What if one of these kids—just as Greta did a year ago— said in the classroom of any town in a South American city that he is not going to school and that he stands for his protest? What would he shout to those who own things and people to tell them that they are responsible for his own hunger and that of his brothers and friends? Will anybody give him a place in the U.N. before Angela Merkel to denounce the Bayer Corporation for poisoning his days? Would they allow him to show his sore skin to question Chevron for the pollution caused by fracking in the Argentine province of Neuquen? Would they accept him to sit in front of the President of France Emmanuel Macron and give details about how big French companies benefit from monoculture and the import of meat from Brazil while they publicly condemn fires in the Amazon rainforest? Would he be allowed to talk before Swiss representatives about money laundering, corruption, and the systematic contamination of each of the companies owned by Glencore, a Swiss multinational commodity trading and mining company, owner of mining companies in three Argentinean provinces?

Could any kid, among those with sequels of the 2,4-D herbicide in their blood and skin, stand in front of the U.N. ladies and gentleman to spit their anger against the Dow Agrosciences, Nidera and Monsanto?

Would they gently accept the crucifixion to the capitalist system on behalf of their victims in the privileged scenarios of the world? Not against Bolsonaro, Merkel, Macron, or Trump, but against a system that stands the test of time. That goes beyond them.

Would they allow the kid to reach the podium, with his dying breath, the latest sprayed youth from the outermost forest or the outermost rural school walked past by employees of Argentina’s soy crushing plants, so that he can tell the first world that they used the remains of world wars to rain on the heads of the childhood of the world that is missing from the maps? Or isn’t the 2,4-D the component they used for Agent Orange, or chlorpyrifos which belongs to the same class of chemicals as sarin gas, all of them in the tool box of chemical wars?

Or isn’t it now a war against what remains of the world? Against good water, against birds, bees, wild flowers, condors, children, and spring mornings?

Then, yes. A different reality will be the day when the kids of the south of the world, those sprayed, dismissed from schools in the farm, Wichi natives evicted from their forests, Mapuche natives deprived from their pieces of Patagonia, gather together and walk the million kilometers towards the U.N. And many in absolute silence.