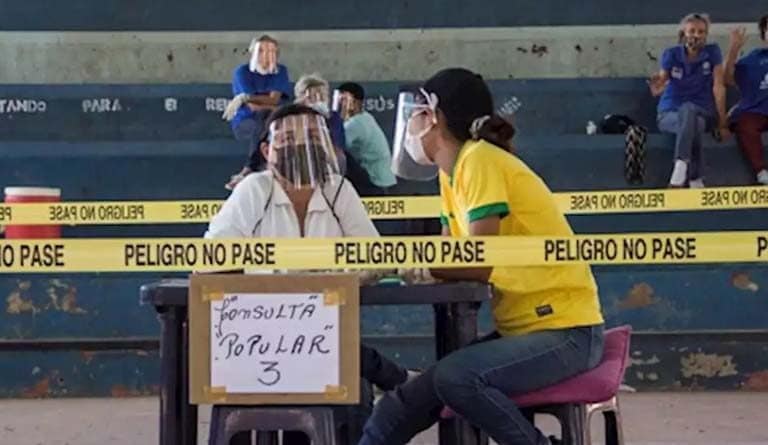 Making political calculations based on inaccurate data does not pay dividends. That was once again demonstrated with the so-called popular consultation organized by deputy Juan Guaidó, of the extremist Voluntad Popular party, with which the opponent intends to stay in power beyond January 5, 2021, the date on which his term expires in the National Assembly and its so-called interim government.

Without national and international observers to provide any guarantees to the legitimacy of the process, held between December 7 and 12 through the Telegram and Voatz apps—questioned for their low integrity even within the opposition ranks—the consultation turned out to be a fiasco. The results were acclaimed only by Guaidó and his internal and external allies: the European Union, the Lima Group and the Trump administration.

“Congratulations to the millions of Venezuelans around the world and especially to those within Venezuela for confronting the oppressive Maduro regime through popular consultation,” said the virtual US ambassador to Venezuela, James Story, who dispatches from Bogotá, Colombia, a neighboring nation from where violent actions have been planned and carried out against Venezuela, including Operation Gideon through which mercenaries tried to destabilize the national territory and kidnap President Nicolás Maduro.

“Ambassador’ Story was referring to 6,466,791 presumed voters who participated in the consultation, a figure that was subsequently deflated to 5,794,267 in a second newsletter by its organizers.

There were no participation controls to prevent the same person from registering their answers repeatedly, or to ensure that those who had already voted using the apps did not also do so also with physical ballots. In this way, everything served to open the door to electoral fraud and betray the mantra of free elections oft repeated by Guaidó and the international right who support him without question.

Out of touch with reality
For the journalist Eugenio Martínez, whom the opposition and anti-Chavista media identify as an expert on the electoral issue, those results announced by the organizing committee of the popular consultation and praised by the US ambassador do not reflect reality.

“Until Friday morning, only 1 million people had participated digitally. Did they reach 2.5 million between Friday and Saturday?” Martínez asked in his Twitter account.

The journalist, a staunch opponent of Chavismo, added: “with three thousand tables, did you manage to mobilize four million people today? Well counted?”

Faced with the questioning of his remarks by the opposition leadership, Martínez snapped via Twitter at the former Popular Will deputy Freddy Guevara: “You sold the consultation as an electoral event. So it is necessary to evaluate it as such.”

The low influx of voters, in a consultation that took place over six days and allowed anyone to participate online, from abroad and within the country, demonstrated the distancing of anti-Chavismo from their leadership, reminiscent of what was said by two-time presidential candidate Henrique Capriles when he noted that the opposition lacks a leader.

RELATED CONTENT: What the US Constitution Specifies About Choosing the New President, How it is Stacked Against us

Neverland
“Ambassador” Story, on the twitter account of the virtual US Embassy, ​​also said that there was “a great attendance of Venezuelans” at a conference called by Guaidó.

The Spanish news agency EFE, also a staunch opponent of Chavismo, said in a report released yesterday: “The president of Parliament (Guaidó) dreamed of long lines of voters during the day on Saturday, the only date on which Venezuelans had the option of depositing their ballots in person. However, as the camera lenses captured, the reality was quite different. Few citizens came to the consultation points dropper, without riots, without long lines, without crowds.”

On his Twitter account former founding member of the opposition party Movimiento al Socialismo (MAS), Enrique Ochoa Antich, was blunt when he said that Guaidó’s consultation reached fewer votes than those obtained by the United Socialist Party of Venezuela, in the parliamentary elections of the past Sunday 6.

“I mean, so much fuss to get fewer votes than the PSUV?” and added: “Incredible and pathetic to see so many and some intelligent and bold people holding this consultation in Neverland, without any practical consequences… Grow up! Please.”

Audits turned to ashes. For the organizers of the popular consultation, it didn’t seem important to clear the clouds of doubts and opacity that obscured the process from its beginning to its completion.

Similar to what occurred with the opposition primaries of the Table of Democratic Unity (MUD) in 2012, in which the organizers burned and destroyed 100 percent of the voting notebooks, in this consultation they were also rendered useless, which thus prevents verifying or validating through an audit, as usually happens in any electoral process, the results that they say were obtained.

In short, the opacity in the interim consultation will continue to mark the future of Guaidó.

“Perpetuating himself in power”
For critical opponents of the G4 (AD, Voluntad Popular, Un Nuevo Tiempo and Primero Justicia), Juan Guaidó’s popular consultation left more questions than votes. “The abstention, no matter how much it wants to hide, was there” and “the event had incongruities that emerged progressively daily,” says the also pro-opposition digital media Panampost.

And although the questions continue to pour in, the leader of the radical Popular Will party is determined to remain in power. Guaidó asked days ago for the support of his followers—whose numbers diminish daily according to polls—on January 5, 2021, when, he says, he will reinstall the parliament he serves in, which by law ends that day.

Featured image: There were no controls to prevent the same person from participating multiple times. Photo courtesy of Ultimas Noticias.