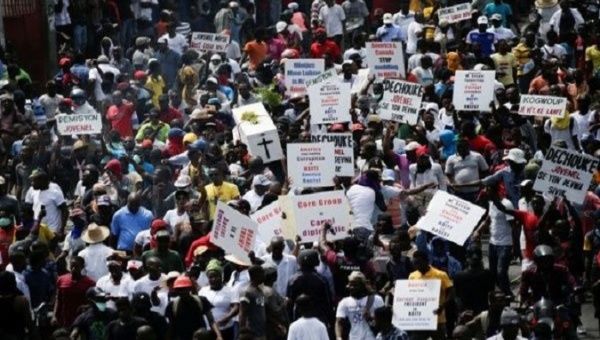 So far, around 17 people have died and almost two hundred have been injured in the month-long protests.

At least four people have died and dozens were injured between Friday and Saturday in strong protests in Port-au-Prince, Haiti, after police used tear gas to dissipate protesters.

The people on the streets are demanding the resignation of President Jovenel Moise in demonstrations that have been going on since September.

RELATED CONTENT: Haitian Bishops’ Justice Commission Calls on President to Step Down and US Haitians Demand Pelosi to Stop Meddling

Protests, sparked by a fuel shortage last month, have led to the closure of schools, public offices and many businesses, as well as the interruption of aid by non-governmental organizations.

Demonstrators demand Moise’s resignation after suffering sustained food and fuel shortages, a sharp devaluation of the currency and the corruption charges against the president and government officials.

In addition, more than one hundred Haitian social, political and economic organizations and institutions demanded the resignation of the country’s president through a document in which they propose a “national rescue government and a successful transition.”

“Haiti is in a chaotic situation that heralds an imminent humanitarian disaster,” these entities denounced, while affirming that the government has lost control of the state.

“In the name of the Haitian nation, we address you, Mr. President of the Republic, for you to recognize the bankruptcy of your administration in public affairs, and to ask you to surrender your resignation to the nation,” the statement says.

These have been the longest protests against Moise since they began in late 2018. A total of 17 people have died and almost two hundred have been injured since mid-September.