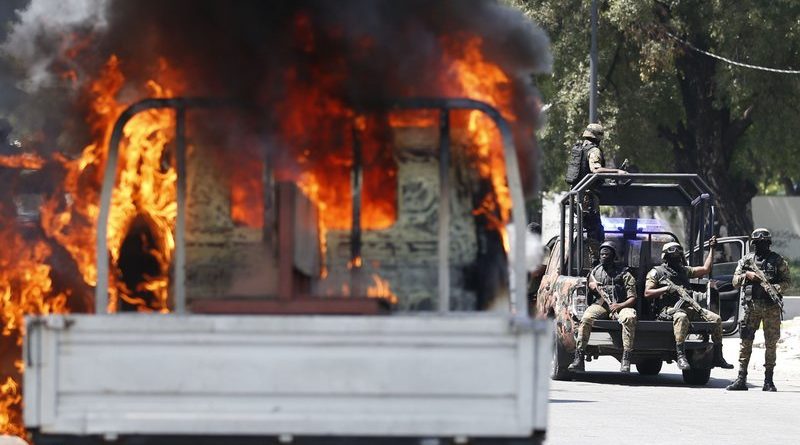 Police clashed with mourners Wednesday as thousands across Haiti attended funerals for protesters who have died in demonstrations aimed at ousting President Jovenel Moïse.

Funerals for 11 of at least 20 people killed were held in six cities, including the capital of Port-au-Prince, where at least two people were injured in a protest that broke out when presidential guards tried to block a road near where hundreds had gathered around the coffins of two victims.

A group of mourners set one police car on fire, prompting police to fire dozens of rounds as most of the crowd fled. After the injured were taken to a hospital, some mourners with rocks chased away a fire truck that was trying to extinguish the blazing police vehicle.

At another funeral, mourners packed a church in the neighborhood of Delmas and part of the crowd spilled into the street.

Some women shouted, rocked back and forth and fell to the floor as people yelled, “Down with Jovenel!” and “Jovenel has to go!” Tires burned in the street outside the church.

Among the mourners was 42-year-old Jean-Mary Daniel, who said the deaths won’t halt the demonstrations that have shuttered many schools and businesses for nearly five weeks.

“A soldier died, but that doesn’t mean you can destroy the army,” he said.

The funerals occurred one day after Moïse held a press conference and said it would be irresponsible for him to step down and he repeated calls for dialogue. However, opposition leaders have rejected those calls and said they will keep organizing demonstrations until Moïse resigns.

The protests are fueled by anger over corruption, inflation that has reached 20 percent and dwindling of basic supplies, including gasoline. Sixty percent of the people in a country of nearly 11 million make less than $2 a day and 25% less than $1 a day.

The funerals were held a day after the U.N.’s Mission for Justice Support in Haiti ended its operations, marking the first time since 2004 that there is no peacekeeping operation in the country. U.N. peacekeeping chief Jean-Pierre Lacroix told the Security Council that progress since 2004 has been “considerable, but the achievements of stability are still fragile and must be deeper rooted in democracy and development.”

He also said “the current context is not ideal for the end of 15 years of peacekeeping in the country,” but he said the U.N. is not completely leaving Haiti.

On Wednesday, a U.N. political mission known as the United Nations Integrated Office in Haiti officially replaced the stabilization mission.