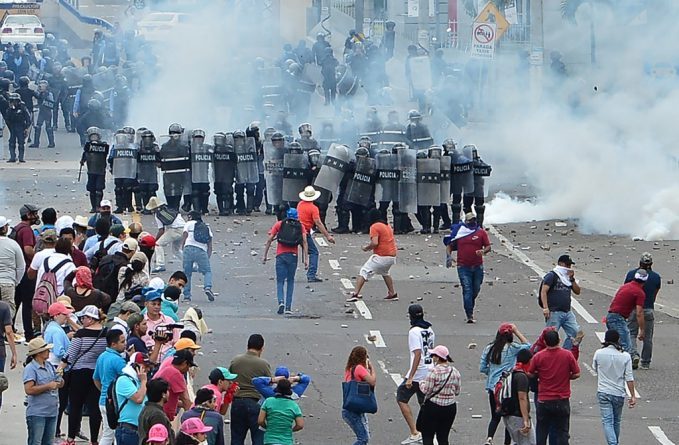 The president of Honduras, Juan Orlando Hernández, has received harsh criticism for ordering a strong repression of the social protests that have generated three deaths and hundreds of wounded.

On June 20, Hernandez ordered the incorporation of military personnel to the tasks being carried out by the National Police, who had joined the general strike initiated by teachers, doctors and seconded by transporters, Prensa Latina reported.

RELATED CONTENT: Why Hondurans Set Fire to the US Embassy

In this regard, the international analyst Roberto Quesada, recommended that Hernandez avoid the excessive use of force and guarantee the human rights of those who participate in the social protests, which have been repressed with tear gas, firearms, by the security forces.

In articles published by the national press, such as El Heraldo newspaper, it was exhorted to guarantee the rights of freedom of expression and peaceful assembly, limiting the use of force to the necessary and proportional minimum, to avoid further injuries and deaths.

The Committee of Relatives of the Disappeared in Honduras (Cofadeh) reported that, apart from the Army, the Preventive Police and the Police Forces, “government social assistance employees support the military as civil shock groups, sometimes armed, against the popular demonstrations”.

Cofadeh also denounced the violent death of three people, two of them with a firearm, whose caliber corresponded to the official weapon used by the Military Police, as well as 29 seriously injured and the illegal detention of 41 citizens.

“Hernández uses the Army to forcefully close the spaces of peaceful expression of social and political opposition, the only ones existing, while the regime controls the traditional media system, induces false news and personality cult propaganda through networks,” Cofadeh said in a statement.

The mobilizations against Hernandez began last May, in protest for the repeal of executive decrees PCM-026 and PCM-027, considered the basis for a future privatization of education and public health in Honduras, with a consequent wave of layoffs.