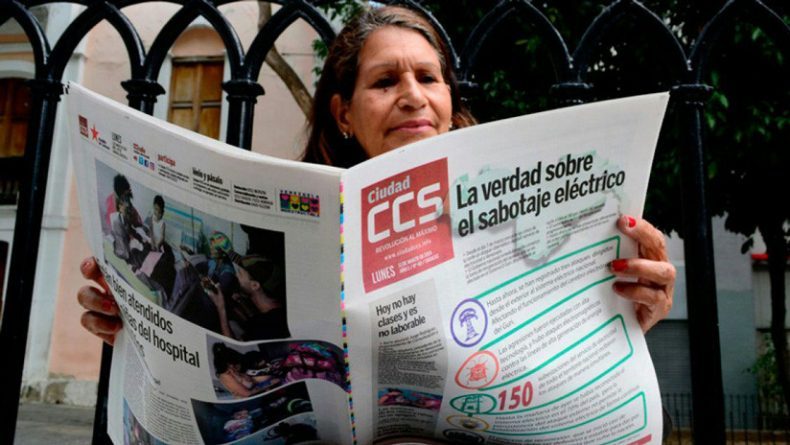 Between the two power outages, the publication’s workers had to adapt to the complex conditions faced by the city to be able to report on what was happening.

“Nobody can make a newspaper alone,” says Mercedes Chacín, director of the newspaper Ciudad CCS (CCS is the abbreviation of Caracas), when she recalls how collective work could make the Caracas publication come out in the middle of the two blackouts that Venezuela experienced in two weeks.

The first electrical event, which occurred on March 7, took the team of this local free circulation newspaper by surprise. The closing of the edition and printing were postponed for three days amid findings that were emerging in the moment.

The experience of those who resolved the way the newspaper would finally come out was fundamental to facing the second power cut, which occurred last Monday, forcing them to rethink the routine scenario of the end of an edition.

How to make the content reach those who wanted to know what happened in a city without light? That was the challenge.

Go out and see what happens
Without really knowing what was going on, Alejandro Angulo, one of the members of the newspaper’s photography team, went out to investigate the surroundings of the historic center where the “Ciudad CCS” headquarters are located, edited by the Foundation for People’s Communication of the Mayor’s Office of Caracas.

The coordinator of the department, Bernardo Suárez, explains that, as the first blackout occurred in ‘rush hour’, there would surely have to be a large volume of people walking back to their homes because the underground transport had also been interrupted.

Suárez remembers that day they were in “the most delicate moment of closure” when the light went out. A group of people decided to stay and wait to see if the power was restored because on other occasions something similar had happened. “We did not know it was a national blackout, we did not have coverage, we started to call our homes and we learned little by little.”

Days later the Venezuelan president, Nicolás Maduro , explained that the first power outage, which lasted for up to five days in some Venezuelan areas, was a “cybernetic and electromagnetic attack” on the brain of the Guri Hydroelectric Plant, which supplies energy to 70% of the South American country, which was followed by fires ignited in electrical installations.

Chacin says that on Sunday, after three days of unsuccessful attempts to finish the edition, the need to go to the hospital arose. She was a reporter, accompanied by Suárez, photographer Yrleana Gómez and a group of artists’ collectives in Caracas. “We were going to provide that social work that would bring smiles, music, and puppets to the place,” he adds. Children’s Hospital, which had its three generators in operation in the emergency, was the center of attention of the national and international media who claimed that the situation there was “deplorable”. “We could go and see that it was a lie, it’s an important lesson to be on the street, to know the real status and tell it without lying, without distorting, without wanting to harm people.”

The finding
When the first power failure occurred, Chacín agreed with her team that they would meet daily at 9:00 in the morning, without previous calls, because the telecommunications service also had intermittent outages.

In her head was the idea of ​​a small stray generator. They had searched everywhere and the only place that was missing was the warehouse, whose key was with the coordinator. After days of attempts she was able to communicate with her, who told her where it was kept.

She asked the coordinator of the Department of Computing, Juan Vicente Gómez, what he could do with the small generator: ” At least load cell phones,” he replied. She asked her to turn it on and went to the Children’s Hospital: when she returned, four computers were working. “Imagine the joy, I felt super happy,” says the director of media. Chacin knew that the printing press could get the newspaper out and that the only thing that was left was to do it. Three pages were completed to close the edition, where there was also an infographic made by the designer Tatun Gois with an explanation of what happened entitled ‘The truth about electrical sabotage’.

As for the second power cut, which occurred on Monday, on Tuesday the generator was powered on  and at the time of closing, the electricity was back, however, due to the delays, they decided to reduce the number of pages by half.

How was the work?
“Each journalist finished his report, he stopped, the other comrade arrived, and so on”, recalls the IT coordinator who, together with the staff in charge, created a small network so that the available machines connected to a server could work. The data was backed up on an external hard drive.

“We are able to do the newspaper wherever they point us, technologically speaking,” he added.

On Monday, more people came to the newspaper. The generator enabled work in the design area, which is the nerve center of ​​the writing, where everything comes together: the work of editors, editors, photographers and designers.

Normally, once the paper is layed out, it is sent to the printer in an email, however, on this occasion, the information had to be stored in a ‘thumb drive’ .

“We had different closings from Thursday to Sunday, we were updated on the march and we finally left on Monday,” says Suarez.

The distribution points are the Bolívar and El Venezolano squares, located in the historic heart of Caracas. They are known because long lines form there of those who wait eagerly for each edition.

Learn and eat
The ways the team accessed information were varied: listening to the radios of the foundation’s drivers, reading sporadic WhatsApp messages, “mouth to mouth” in the streets and direct observation.

One of the work days, the staff was hungry and the tasks had to be divided, recalls Chacin. The head of security, José Hernández; the computer and transport head, Javier Guerrero, went to cook: there was rice, lentils and corn flour. “They made a very good meal.”

On the other hand, Hernandez explains how the personnel under his charge protected the personnel, the foundation and the municipal assets, through joint support.

After the blackouts, precautions have also been put in place such as including such work tools as ‘thumb drives’, flashlights, radios, memory cards, among others.

In his account of the experience of publishing in the dark, Chacin affirms that every day he learns how to act in these situations “from doing, from the confluence of wills.” The work in a newspaper is absolutely interdependent, no one can make a single newspaper”.