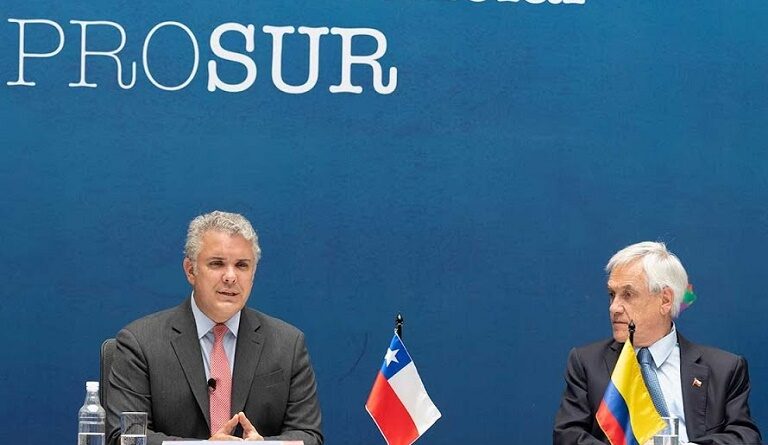 The crisis caused by the COVID-19 pandemic and the consequences of internal Colombian problems have exposed the absence of a regional forum to address these difficulties and generate coordinated solutions among the governments of Latin America and the Caribbean.

In the prior decade—South America’s golden age—the region had UNASUR, an organization that fostered increased coordination between governments regardless of their political ideology, to resolve myriad and unpredictable international challenges.

Dismantling of UNASUR
This vacuum arose after the rise of right-wing governments in the region that began an operation to dismantle the Union of South American Nations (UNASUR), an institution founded on the commitments of Hugo Chávez, Luiz Inácio “Lula” da Silva, and Nestor Kirchner, who presided over the governments of Venezuela, Brazil, and Argentina, respectively.

This dismantling, that began in 2015, was led by Mauricio Macri who—under US direction—abandoned Argentina’s policy of supporting UNASUR and turned his interests to the country’s entry into the Pacific Alliance. Added to this was the coup against Dilma Rouseff in 2016, which installed the de facto government of Michel Temer in Brazil, that adopted positions opposed to the strengthening of regional unity, again in agreement with US plans.

At the same time that this dismantling operation was being orchestrated under the pro tempore presidency of Argentina, during a meeting of foreign ministers of the Pacific Alliance, the proposal arose to create a group of countries to “defend democracy in Venezuela,” which they decided to call the Lima Group. This organization gathered all the right-wing governments of the continent into a brotherhood whose main objective would be to achieve “regime change” in the Venezuelan nation under the direct instructions of Washington, which decided to position Canada and Latin American puppet governments as the group’s leading forces, for public relation purposes.

Lacking a consensus for the election of a general secretary, the arrival of Donald Trump to the presidency of the United States and Lenin Moreno’s betrayal after winning Ecuador’s presidency heralded the disintegration of UNASUR. In 2018 Argentina, Brazil, Colombia, Paraguay, Chile, and Peru announced their departure from the bloc, amid accusations that the organization was ideological. The fragmentation was capped by Ecuador’s demand for the return of the building housing the organization’s headquarters in Quito.

RELATED CONTENT: Year one in the Fight Against COVID-19: A Conversation with Elisabeth Daza and Jose Mireles (Part I)

The Lima Group and anti-Chavismo
On August 8, 2017, the foreign ministers of Argentina, Brazil, Canada, Chile, Colombia, Costa Rica, Guatemala, Honduras, Mexico, Panama, Paraguay, and Peru met to discuss the “Venezuelan crisis.” From this meeting emerged the so-called Declaration of Lima, condemning the Venezuelan government, and withdrawing recognition of its political institutions under the premise of Venezuela “having ruptured the democratic order” after the installation of the National Constituent Assembly. The Assembly brought an end to the deadly destabilization launched in the country by the Venezuelan extreme right’s guarimbas (violent right-wing protests).

This constant condemnation and non-recognition of Venezuelan institutions has been the primary task of a “group” that has itself begun to fracture as new center and progressive governments arrive in power. The first major gamechanger occurred with the end of Mexico’s support for the Lima Group, and the most recent blow was the departure of Argentina and Bolivia, leaving the group without countries that are very influential in the continent due to their economic and political weight.

In addition to this, the political and social crises that suffocate Peru, Ecuador, Brazil, Honduras, and Haiti, and the constant human rights violations in Colombia against social leaders and peace signatories, have silenced this group. Guillermo Lasso’s election in Ecuador gave a puff of life to the group in the midst of what seems like a return of progressive governments on the continent.

The Prosur of Piñera and Duque
When they came to power in 2018 the presidents of Colombia and Chile, Iván Duque and Sebastían Piñera respectively, killed their countries’ participation in UNASUR and launched a proposal for a new regional bloc, the Forum for the Progress of South America (Prosur), which held its first meeting in March of that same year with the participation of its promoters, as well as the governments of Argentina, Brazil, Chile, Ecuador, Paraguay, and Peru.

The first presidency of the new organization was held by Sebastián Piñera, and in December 2020 he handed the role over to Iván Duque in a virtual meeting where the applause was abundant, and the achievements obtained by this integration of conservative politicians were scarce.

The mass uprisings in Chile, the assassinations of social leaders in Colombia, and the arrival of COVID-19 on the continent are some of the regional situations that this forum has addressed without any decisive or concrete actions. Other concerns have been simply ignored.

Currently South America faces a health crisis as a result of the irrational actions of the Brazilian president Jair Bolsonaro, who made Brazil the global epicenter of the pandemic and a danger to the region. Brazil has seen the spread of two new variants that have arisen in the country, highly contagious and more deadly, revealing the absence of any organization to coordinate unified policies that would protect all South Americans.

Weakened by the pandemic
In 2009, through UNASUR, the region agreed to purchase H1N1 flu vaccines, which made South America a reference point for coordination and political will to face the virus. As a result the region was among the least affected by that pandemic.

Eleven years later, in the midst of the COVID-19 crisis and the political shocks experienced by some of its members, the Lima Group and Prosur have revealed their administrative ineffectiveness, mainly associated with the absence of vision, and the lack of any leadership that promotes integration beyond the ideological positions of the region’s governments.

Regarding the pandemic, in a brief meeting in which Prosur’s promoters Piñera and Duque barely spoke, Prosur only pointed out the importance of vaccines, without reaching an agreement to coordinate its realization, which would be facilitated if its member countries had a unified stance. Chile has supported a rapid vaccination process, while Colombia sinks into neglect, because each country negotiated on its own and according to the availability of its own capital.

Regarding the Lima Group, the inefficiency and lack of coordination is even greater because there has been no statement regarding the pandemic, except in April 2020 to warn about the danger of the pandemic in Venezuela; a statement that, in addition to being extremely premature—the pandemic had barely reached the continent—could not see beyond the supposed apocalypse that would afflict Venezuela during the pandemic.

This imagined scenario for Venezuela was forgotten due to the excellent management of the crisis by the government of Nicolás Maduro, which has seen the country among the least affected by the virus—unlike Brazil, Chile, Colombia, Peru, or Ecuador, who have been overwhelmed. This has not prompted any further statements, or even a meeting to set common policies to face the health crisis.

Today, South America confronts a political, social, economic, and health crisis without a common policy to face the challenges posed by the post-COVID world, all as a consequence of the absence of political and strategic vision of a right that can only unite under a single objective: overthrow the Venezuelan government and join the plans of the United States Department of State under the Monroe Doctrine of “America for the Americans.”

Featured image: Prosur was devised by Piñera and had the support of Duque to oppose UNASUR, following US directions. Now there is no UNASUR or Prosur, and the gringos are happy. File photo.