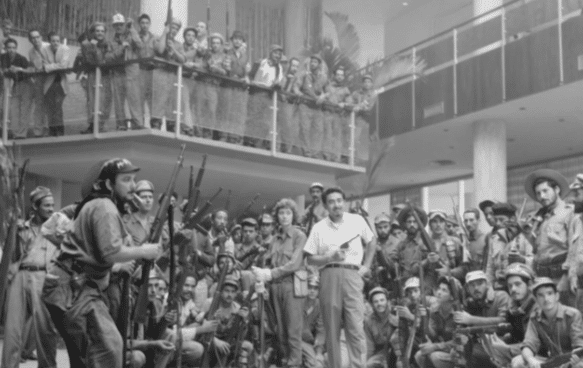 Capitalism in the imperial core is speeding towards collapse. While imperial decline makes the country more and more isolated from the rising economic power of China, U.S. unemployment continues to rise, signaling a depression which is sure to last for at least the rest of the decade. The increasingly poor and desperate masses are flooding the streets to demand an end to the ever worsening police brutality, austerity, and inequality. But as long as the capitalist state retains its dominance over exercising violence, this and all future revolts will be crushed, and the transition into fascism will only continue.

Which is why if you live in the U.S.-or in the other core imperialist countries which are undergoing similar crises-and you’ve committed yourself to studying Marxist revolutionary theory, your responsibility is to help prepare yourself and other communists for guerrilla warfare against the state. We must work towards fulfilling the mandate for guerrilla warfare that was described by Che Guevara: “Why does the guerrilla fighter fight? We must come to the inevitable conclusion that the guerrilla fighter is a social reformer, that he takes up arms responding to the angry protest of the people against their oppressors, and that he fights in order to change the social system that keeps all his unarmed brothers in ignominy and misery.”

To become sufficiently knowledgeable to take on this task, it’s necessary to read Che Guevara’s Guerrilla Warfare, to read Carlos Marighella’s Minimanual of the Urban Guerrilla, and to read Mao Tse-tung’s On Guerrilla Warfare. But in the present conditions in the U.S., which exact actions should you take that will best bring the Marxist-Leninist movement towards having the power to successfully wage guerrilla warfare?

RELATED CONTENT: After 23 Years of Media Warfare Against Venezuela, the US Says it Will Start a Media War

The first thing you should do, aside from the obviously needed work of getting yourself and your group members armed and trained, is review these seven sins of the urban guerrilla, as listed by Carlos Marighella:

Avoid these pitfalls, and you’ll have a far better idea of what to do. Utilizing these types of pragmatic assessments of our movement’s military prospects in this country, the Marxist-Leninist YouTuber Hakim recently gave his audience the following instructions on how to proceed with armed struggle: “Arm yourselves. Establish armed wings of revolutionary organizations. Start coordinating armed actions across the country with as many organizations as you can. Remember, never terrorist activity-only military and state targets. Establish Red bases around the country, and begin building dual power.”

In addition to following these guidelines, you can gain awareness of what to do and what not to do by reading the guerrilla warfare texts I’ve listed. By taking all of these preparatory measures-thoroughly studying texts on guerrilla tactics, recognizing fatal mistakes before we make them, getting physically fit and trained for combat, building armed organizations-we can be ready for the moment when the situation calls upon us to enter into action.

When will this moment come when the class war within the U.S. escalates to armed struggle? The beginning of the armed struggle in Cuba which led to the country’s socialist revolution helps give us a hint of how an equivalent conflict in the U.S. will start. Cuba’s revolutionary war began in 1953, when the communists attacked several of the Batista dictatorship’s military installations. This first attempt was defeated. But in the following years, as unemployment and repression increased, a 1957 general strike would start skirmishes with police that lasted days. After that year, the revolutionary forces would start to almost consistently make Batista’s forces have to retreat after battles, despite the revolutionary forces having been vastly outnumbered. By the end of 1958, the rebels had overcome the regime’s forces, and Batista had to flee the country before the guerrillas captured Cuba’s capital.

Our war for liberation will look very different, since the U.S. military is much stronger than Batista’s military was (Batista’s forces became weakened partly by a U.S. weapons embargo, whereas the U.S. military will no doubt receive help from other imperialist powers in the event of a civil war). But every country’s war for socialist and anti-colonial liberation looks different. The most immediately relevant lesson we can take from Cuba’s guerrilla war is that when a guerrilla conflict starts here, it will be preceded both by years of guerrilla warfare preparations from the revolutionaries, and by the emergence of conditions which can bring much of the population to support the communists.

Such conditions are on their way to becoming present here. It’s our job to become personally and organizationally equipped to use these conditions as a catalyst for the fight which will free this continent.