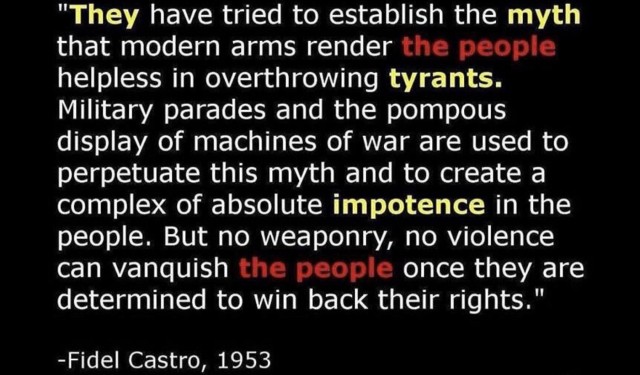 If you’re in the United States, and your goal is to assist with the anti-colonial proletarian revolution on this continent, you automatically have a target on your back. The biggest target that any political group in this country can have, because the imperialists and the bourgeoisie fear communism and decolonial liberation more than anything else. We’re in the heart of the beast of global imperialism, up against a state that tracks every digital communication and statement we make and that could send in the world’s most powerful military to try to crush us. This is why we can only win by outsmarting the repressive state, which will lead to us having to outsmart the state’s military forces.

Those within our revolutionary cadres need to view their task as a David and Goliath fight, where one side can only achieve victory by finding the very specific tactical routes towards the defeat of an enemy that’s immeasurably more equipped. To succeed in this, we must look at the very most extreme cases of counterrevolutionary warfare. In Nazi Germany, the rate of communists who were killed was almost 100%. In the US-backed Indonesian massacres of the 1960s, a million people were killed as part of a campaign to exterminate all communists and all potentially associated with communism. Colombia’s political genocide against communists killed more than 6,000 through murders, forced displacement, torture, disappearances, and other atrocities. And this genocide took place mainly after Operation Condor, the US-orchestrated political repression campaign across Latin America where 50,000 were killed, 30,000 were disappeared, and 400,000 were imprisoned.

RELATED CONTENT: The Freedomless, Heavily Surveilled Hellscape the US Plans to Bring to Its Own People

In Indonesia, communist organizing is still nonexistent due to the political genocide, and due to the ongoing ban on the public expression of Marxist-Leninist ideas. And as is the case for the mass political killings under Latin America’s US-installed dictatorships, Indonesia’s Nazi-esque repressive campaign has provided a blueprint for the US empire’s broader anti-communist extermination campaigns. Campaigns which will absolutely be brought into US borders when the class struggle here intensifies enough.

It’s only a matter of time before Indonesia’s underground elements of class consciousness turn into a renewed communist movement, since the accelerating inequality within the country and the looming climate crisis are making this the only route the Indonesian masses have towards survival. But we can’t afford to neglect our task of outmaneuvering the inevitable US anti-communist extermination campaign; the fact that capitalism’s collapse is inevitable doesn’t mean we shouldn’t treat the repressive forces of capital with utmost seriousness, because we’ve seen what these forces are capable of. It’s our responsibility to do all we can to survive, however big the dangers we face. And we can do this by adopting the methods that anti-imperialists abroad are currently taking to evade defeat by the US military, and by Washington’s partnered regimes.

Yemen’s Houthi resistance fighters are one of these examples we need to learn from. In their fight against the genocidal US/Saudi coalition, they’ve found a way to keep a guerrilla force alive—and even make it increasingly victorious —in the era of modern digital surveillance. As researcher Michael Horton wrote this year, frequent mobility is crucial to the ongoing existence of the Houthis:

Force mobility has been—and remains—fundamental to the Houthis’ success in battling elements of the Saudi and Emirati militaries as well as those forces they support. These forces include Yemen’s internationally recognized government-in-exile, led by President Abdrabbuh Mansur Hadi, which is allied with Saudi Arabia, and a panoply of militias and armed groups supported by the UAE. The Houthis understand and readily apply what Chairman of the Joint Chiefs of Staff General Mark Milley explained in 2016, “on the future battlefield, if you stay in one place longer than two or three hours, you will be dead.” [4] General Milley made his comments in light of the widespread use of drones and other rapidly developing battlefield technologies…In response to what, at times, has been persistent aerial surveillance, the Houthis make extensive use of highly mobile small combat units. These units are critical to the Houthis’ ability to defend territory, harass enemy forces, and plan and launch offensives. The combat units most often consist of no more than 20 men—roughly equivalent to a squad or specialized platoon—who rely on two or three light trucks and/or technicals. These trucks and/or technicals are easy to disguise and traverse Yemen’s worst roads and tracks.

This means that when the moment of revolutionary crisis arrives, and the anti-communist purges begin, we’ll need to flee. Not outside of US borders, but towards safe routes within the country that we’ve devised in anticipation of the extermination campaign. I say “safe routes” instead of “safehouses” because while safehouses will be sufficient for some movement members, we all must prepare for scenarios where we’re on the run from a military that can track us down through drones, satellites, and surveillance towers. This applies both to those who will have to operate in the wilderness, and those who will be cornered in the cities that the military is trying to retain control over; the difference is that the latter contingent will have a more compact set of options for where to flee. We must study the geography in our regions, arrange for refuges and backup refuges, and figure out how our cadre members will have to proceed in the event of a Nazi-esque purge.

If this sounds absurd, know that multiple US military documents from recent years have predicted that the military will be called in to suppress class revolts in the coming decades, with one saying the Army must prepare for “contemporary Stalingrads” on US soil and another describing such a scenario as “unavoidable.” Plus, this vision of the revolutionaries in this country having to fight off a siege from the government is something that the most forward-thinking radical organizations have been seriously considering and preparing for. Last year, the Indigenous Anarchist Federation put forth a guide to secure radio communications equipment that they recommend revolutionary cadres here assemble, under the following rationale:

Cell phones and the internet rely on corporate infrastructure and is subject to both government surveillance and service denial. What do we do when social media bans anti-capitalists and anti-colonialists? What do we do when our cell phones fully become monitoring devices we willingly keep by our side, all to the benefit of state intelligence services? What happens when our cell phone numbers are blocked from service? How will the revolutionaries continue to communicate locally, regionally, and internationally? These are the questions that have been left in the dust, forgotten or ignored in favor of more romantic visions of armed struggle. People forget; no struggle has ever been successful without robust communication networks that are not subject to state control.

The IAF also has guides to the firearms, ballistic protective equipment, and trauma medical gear that we’re going to need to acquire if we stand a chance at staying alive. Cots, life straws, and camping equipment will also be useful in the kinds of scenarios the IAF is anticipating. And that’s aside from the training in arms, martial arts, wilderness survival, and medicine which we’ll need to get to be able to properly use these tools. An Army-level fitness regimen and diet are also important. Joining a revolutionary cadre means committing to whatever the circumstances are going to demand of you, which may be a role that’s as austere and laborious as the roles of those who are currently resisting imperialism through unconventional warfare.

And even all of this preparation will lead us to the fate of the Indonesian communists if we make the mistake of adventurism, of rushing into conflict when the masses aren’t yet ready. We must proceed according to the rules for revolution described by Che Guevara:

During the development of armed struggle, there are two moments of extreme danger for the future of the revolution. The first of these arises in the preparatory stage and the way it is dealt with will give the measure of determination to struggle as well as clarity of purpose of the people’s forces. When the bourgeois state advances against the people’s positions, obviously there must arise a process of defense against the enemy who at this point, being superior, attacks. If the basic subjective and objective conditions are ripe, the defense must be armed so that the popular forces will not merely become recipients of the enemy’s blows. Nor should the armed defense camp be allowed to be transformed into the refuge of the pursued. The guerrilla army, the defensive movement of the people, at a given moment carries within itself the capacity to attack the enemy and must develop this constantly. This capacity is what determines, with the passing of time, the catalytic character of the people’s forces. That is, guerrilla warfare is not passive self-defense; it is defense with attack. From the moment we recognize it as such, it has as its final goal the conquest of political power.

Which brings me to another example of guerrilla resistance to imperialism that we can learn from: Colombia’s new revolutionary insurgency. This insurgency has been gaining territory from the fascist Colombian government, and it’s been doing this by not just being militarily equipped but by modeling itself in a way which accommodates the masses. The insurgency’s guiding organization Segunda Marquetalia isn’t merely a peasant organization, but an institution which represents all oppressed classes, rural and urban. In other words, it’s followed Che’s advice about making decisions based on the material conditions.

So it’s been able to provide tangible improvements in living conditions for the people under its jurisdiction, making these people reward it with their backing. Such is the reward that we’ll get—ultimately on a continent-wide scale—if we make the right maneuvers. The sacrifices we’ll make are necessary for the liberation of this land from colonialism, and from colonialism’s destructive byproduct capitalism.

Featured image: “No weaponry, no violence can vanquish the people once they are determined to win back their rights,” said Fidel Castro.