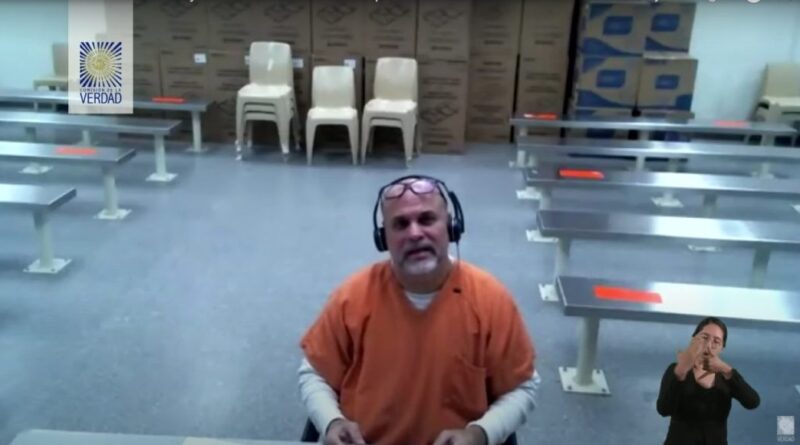 Salvatore Mancuso, demobilized and imprisoned Colombian paramilitary leader, has provided detailed testimony on how the Colombian government is closely linked to the creation and preservation of paramilitary groups like the United Self-Defense Forces of Colombia (AUC).

Mancuso, a.k.a. Mono Mancuso, Santander Lozada or Triple Cero, was extradited to the United States in 2008, where he remains imprisoned in a maximum security cell in Atlanta. From there, Mancuso declared before the Truth Commission set up by the Colombian government as part of an ongoing judicial process for prosecuting Colombian paramilitary armed groups for their crimes against humanity.

Mancuso claimed that, as a civilian who was initially dedicated to collecting funds and information and setting up communication networks, as well as implementing this entire system of support for state institutions, he was mainly “a civilian de facto member of the state in support of the military forces.”

“I joined the conflict as a civilian,” added Mancuso. “This is a process that takes place in stages, in which agreements are first made from a bureau, an office, a community center or hotel, and a network is thus formed through such meetings.”

Mancuso admitted that the first time he took part in a military operation was to assist a Colombian Army troop in a reconnaissance mission in search for a guerrilla camp. Mancuso was there as a scout, taking the military personnel to areas with which they were not familiar and showing them where the guerrillas were hiding.

Mancuso also informed that the activities of the AUC yielded not only economic benefits but also political ones, given the fact that those of the AUC who successfully carried out certain assignments in their communities got an electoral district to control and administer for electoral processes in the country.

The armed political wing
Mancuso elaborated on the political commissioners and on the CONVIVIR organizations, through which direct coordination was maintained with Colombian government institutions to advance and expand the AUC.

He further explained that none of the paramilitary groups in Colombia would ever go to a region without first having secured some form of financing. Hence, they have always emerged in mining or oil producing regions, for example.

In Mancuso’s words, “when the Berlin Wall fell and the Cold War ended, and international pressure for the defense of human rights began; this is when the Colombian government started to pass over certain tasks to a separate armed agency.”

Consequently, Mancuso elaborated, the Colombian government dedicated itself to aiding the formation of paramilitary groups, with the aim of avoiding the weight of international law falling on the governments in their confrontations with the armed guerrillas.

Mancuso also gave a step by step explanation on how the AUC became a de facto state authority that would respond to requests made by communities, requests and demands which state institutions would not resolve.

Mancuso’s testimony before the Truth Commission was reported in detail by Colombian and international media.