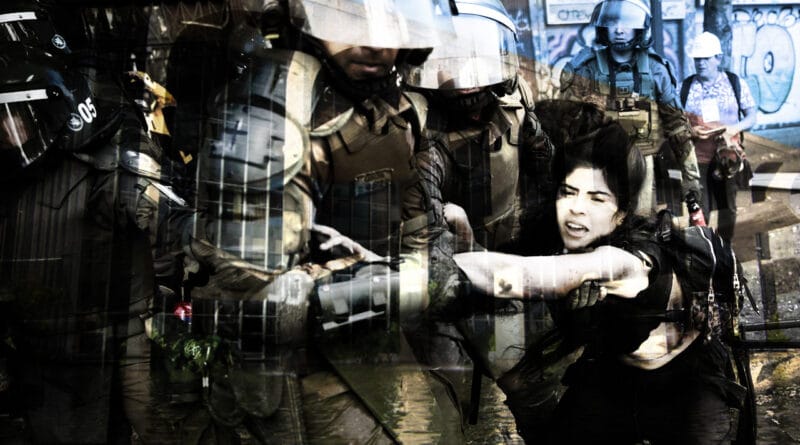 After conspiring in favour of the coup against Bolivia’s Evo Morales, aiding its protagonists, and making unprovoked attacks on the governments of Argentina and Venezuela, newly disclosed documents have revealed that Jair Bolsonaro’s government was also assisting Chilean security forces in their attempts to crush the wave of protests which swept the country in late 2019.

A disturbing picture is therefore developing of a US-backed, far-right Brazilian government, abetting harassment, violence and menace toward leftists and progressives of its South American neighbours, echoing the cross border persecutions of Operation Condor in the 1970s.

Documents obtained by UOL reveal that during Chile’s 2019 protests, members of the country’s security forces, under pressure due to the high number of injuries to the public caused by police actions, attended the Brazilian embassy in capital Santiago to request the country’s help in dealing with the demonstrators. Chilean officials asked the Brazilian military to use their intelligence agencies to try and identify whether foreign groups were inciting protests against the government of Sebastián Piñera. At the time, the Brazilian military raised a hypothesis that Open Society, the foundation of Hungarian billionaire George Soros, Foro de São Paulo, an organization of left-wing parties in Latin America, or a “globalist movement” could be behind the protests in Santiago.

As a result, the PSOL group in congress made a request in October, demanding explanations from the Minister of Institutional Security, General Augusto Heleno, asking for the Bolsonaro government to explain its stance in the face of  Chile’s 2019 protests and the monitoring of Brazilian civil society. On December 11, the Ministry of Foreign Affairs responded to parliamentarians, through a letter signed by Foreign Minister Ernesto Araújo, which claimed that there were no documents on any such cooperation or on the possibility of action by Brazilian entities in the protests, or opinions on them expressed by Jair Bolsonaro. However, this has been contradicted by other statements made by the Foreign Ministry.

Brazil’s Foreign Ministry, Itamaraty, denied that it had suggested, encouraged or supported any type of action regarding the mass protests that have taken place in Chile, but later admitted that on November 26, 2019, there was a meeting at the Organisation of American States (OAS) Permanent Council to address the Chilean crisis, where delegates criticised violent demonstrations in Chile and praised the government’s efforts. Brazil’s mission to the OAS received instructions from Brasilia to support Chile in a debate held at the regional body. In a speech that was supposed to be read during the meeting, the Foreign Ministry instructed diplomats to condemn the protests.

According to the Foreign Ministry, in November 2019, “the Embassy of Brazil in Santiago was approached by an officer of the police” (Carabineros de Chile) “interested in knowing the Brazilian experience in public order control activities, in particular the characteristics of the elastomer ammunition used to control violent demonstrations in Brazil”.

The Chileans’ request was sent to Brasilia on November 21 and, seven days later, the Foreign Ministry asked the Ministry of Justice for “technical elements on the subject”.

Itamaraty explained to the Justice Ministry, at the time commanded by Lava Jato judge Sérgio Moro, that the Chilean police were being criticized for the use of elastomer ammunition in crowd control activities. In just one month, 222 people suffered eye injuries as a result of the crackdown. In return, the Ministry of Justice prepared a document entitled “Shock Operations” which details protest repression techniques used by the Brazilian National Public Security Force (FNSP).

According to the document, crowd control operations in Brazil follow guidelines based on the German school, which aim to disperse protesters through tactics of terror, producing a demonstration of strength, and causing the psychological impact necessary to persuade protesters not to resist. When such persuasion does not work, combat follows. The document ends by giving details of the least offensive ammunition used by the FNSP, including details of the type of rubber in the projectiles. According to the UOL report, ministers in command of the FNSP portfolio had never allowed this type of “information exchange” before.

In a telegram, dated November 26, 2019, the Brazilian ambassador to Chile, Carlos Duarte, explained that the Chilean Foreign Minister, Teodoro Ribeira, was going to the OAS meeting with the objective of “damage control” and acting proactively in the face of criticism from groups such as Amnesty International and the UN mission, which days later would conclude its investigations.

The telegram was transmitted to all posts in Brazil, throughout Latin America, and to Brazil’s mission at the United Nations.

While the telegram circulated around the embassies, Bolsonaro commented on the Chilean protests during his trip to China:  “Virtually every country in South America has its problems. Chile was very serious. That is neither a demonstration nor a complaint. These are terrorist acts.”

The Bolsonaro government is keen to break the diplomatic tradition of Brazil, and has provoked countless incidents with many countries in South America. In 2019, Jair Bolsonaro, through his Foreign Ministry, conspired against Evo Morales, and supported the government of coup dictator Jeanine Añez, quickly recognising her as president of Bolivia. On several different occasions, Bolsonaro attacked Argentine President Alberto Fernández, calling him an “abortionist”, and accusing Fernandez of “making the Argentinians go hungry“.

Perhaps the country that suffers most from attacks by the current Brazilian government is Venezuela, Bolsonaro’s obsession with defaming and offending the country has reached extreme levels. Brazil even gave shelter to dissident military personnel linked to a terrorist attack which took place on December 22, 2019. Venezuelan President Nicolás Maduro remarked at the time that “Bolsonaro is dragging Brazil’s military forces into armed conflict against Venezuela, by supporting a group of terrorists who attacked a Venezuelan military barracks”.