It is said that on a rainy night, in Sabaneta de Barinas, the boy who would become one of the greatest political leaders of Venezuela, and of the Latin American and Caribbean region, was born. This was Commander Hugo Rafael Chávez Frías, the great leader of the Bolivarian Revolution. Hugo Rafael Chávez Frías, peasant boy, baseball-playing teenager, young soldier, insurgent man, firm and loving leader, and leading light of peoples and revolutions.

The great revolutionary leader ventured into the military world in an attempt to reach the US major leagues of baseball, but the call of his homeland, and outrage at a world of inequalities, made him change course. 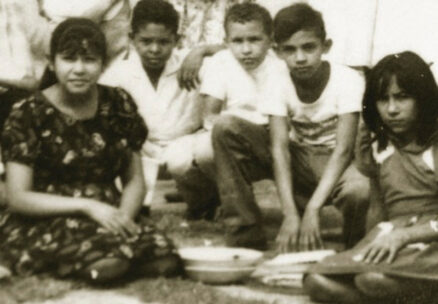 Chávez completed his primary and secondary studies in Sabaneta, Barinas state, and his university studies at the Military Academy of Venezuela, where he received the title of second lieutenant in 1975. He also graduated in the military sciences and arts, engineering branch, land forces.

He held various positions in the Venezuelan Armed Forces, the last of which would be commander of the Parachute Battalion Colonel Antonio Nicolás Briceño (1991-1992). 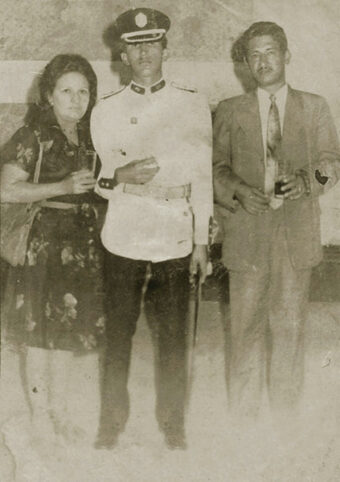 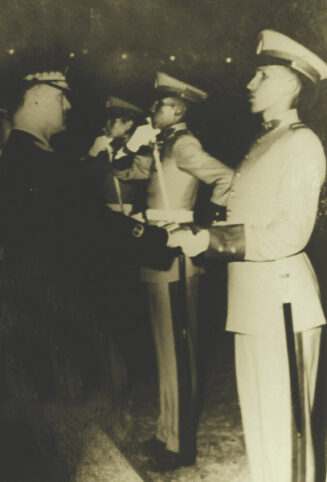 “Por ahora“
Most Venezuelans met him for the first time on February 4, 1992, when he shocked the country with his “for now” (“por ahora“), assuming responsibility for the civic-military rebellion that he led that morning.

This was the first time that his face was widely seen by the public, but by that time Chávez had already spent years of silent work in the barracks, recruiting forces and souls who, like him, dreamed of another course for the country and for the world. 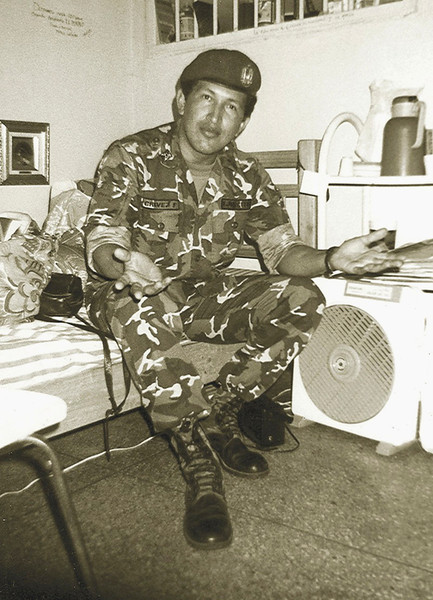 The rest of the story is known to many. He was imprisoned and served two years in Yare Prison. In 1994 he was released, and his popularity rose exponentially. He promised to tour the country and go to the “people’s catacombs,” and he did.

In 1998, he won the presidency in the midst of immense popular fervor, elected with 56.2% of the vote and, immediately afterwards, as he had promised, he convened a National Constituent Assembly to rejuvenate the Republic by writing a new Carta Magna with the people, and ratified by the people itself. 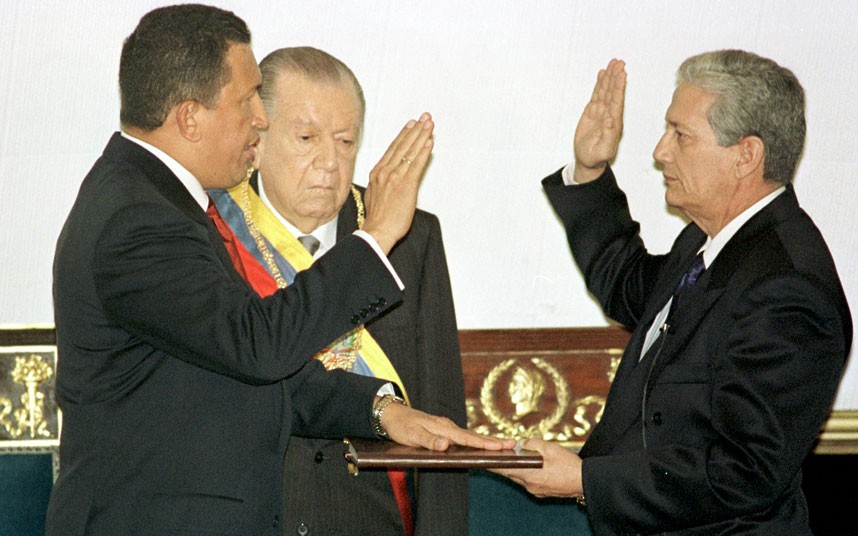 Commander Chávez summed up the purpose of the Bolivarian Revolution in this way: “We have always been pushing it, pressing it, understanding this process as a historical project, necessarily a long-term one, with long horizons, with many paths … It has nothing to do only and exclusively with this human being who is here; I am just a soldier, a life and circumstances brought me here. No, it is not because Chávez won the elections that there will be a Homeland, it is because a good majority, a clear majority of Venezuelans, voted for the Homeland, they voted for the future.”

In 14 years as the head of Venezuela, he promoted historic changes both inside Venezuela and abroad. He centered his international policy on solidarity, on the unity of the peoples of the South and on the South American union. He directed that the bulk of Venezuela’s oil revenues be dedicated to social programs for the people. 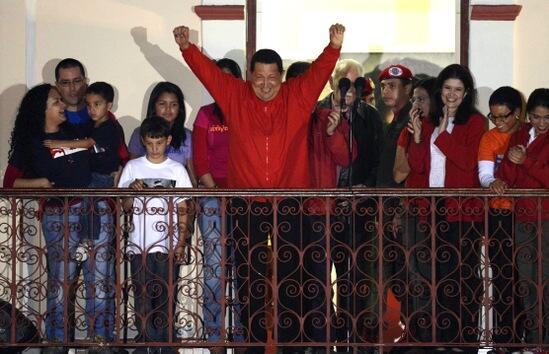 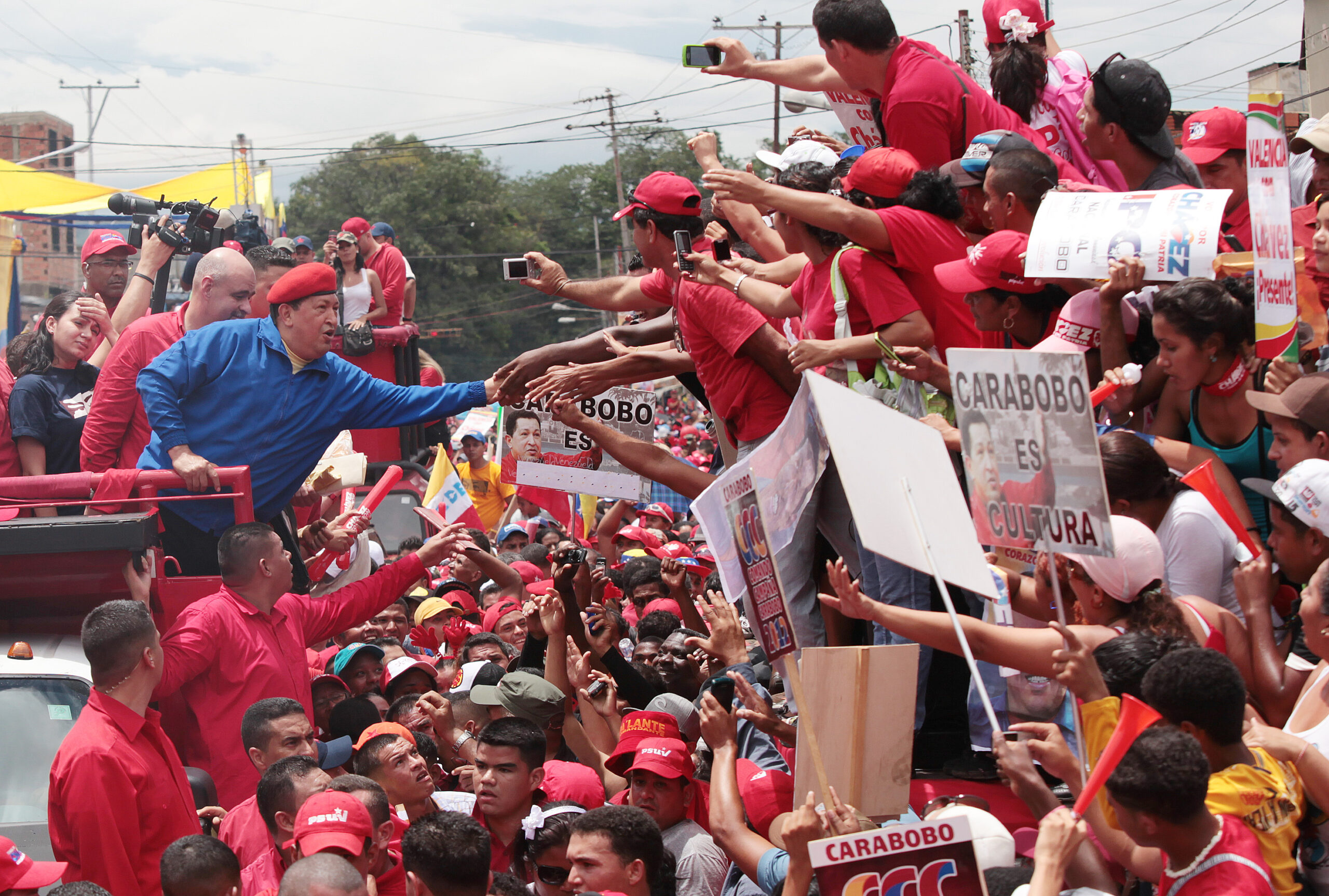 In this way, Hugo Chávez stood up to the great powers and the great capitalists, and he breathed that same rebellious character into his people, that same mass of people who in 2002, when far-right groups managed to overthrow Chávez for less than 48 hours, place their bodies in front of the bullets and risked their lives, going out into the street to demand his return.

On April 11, 2002, the extreme right provoked the first media–business coup d’état with Pedro Carmona Estanga, president business association Fedecamaras, who usurped power. They shuttered Venezolana de Televisión (Venezuela’s primary public television network)) and persecuted progressive journalists and the people. They dismissed governors and mayors and eliminated, with a stroke of the pen, the Bolivarian Constitution, voted in by Venezuelans, to illegally resume the repealed Magna Carta of 1961, approved by the old Congress of the last century.

Kidnapped for two days on the island of La Orchila, President Hugo Chávez was rescued by the Bolivarian National Armed Force (FANB) and the majority of the people, in the exemplary civic–military union that expelled dictators and military traitors from Miraflores Palace to restore full democracy in Venezuela. 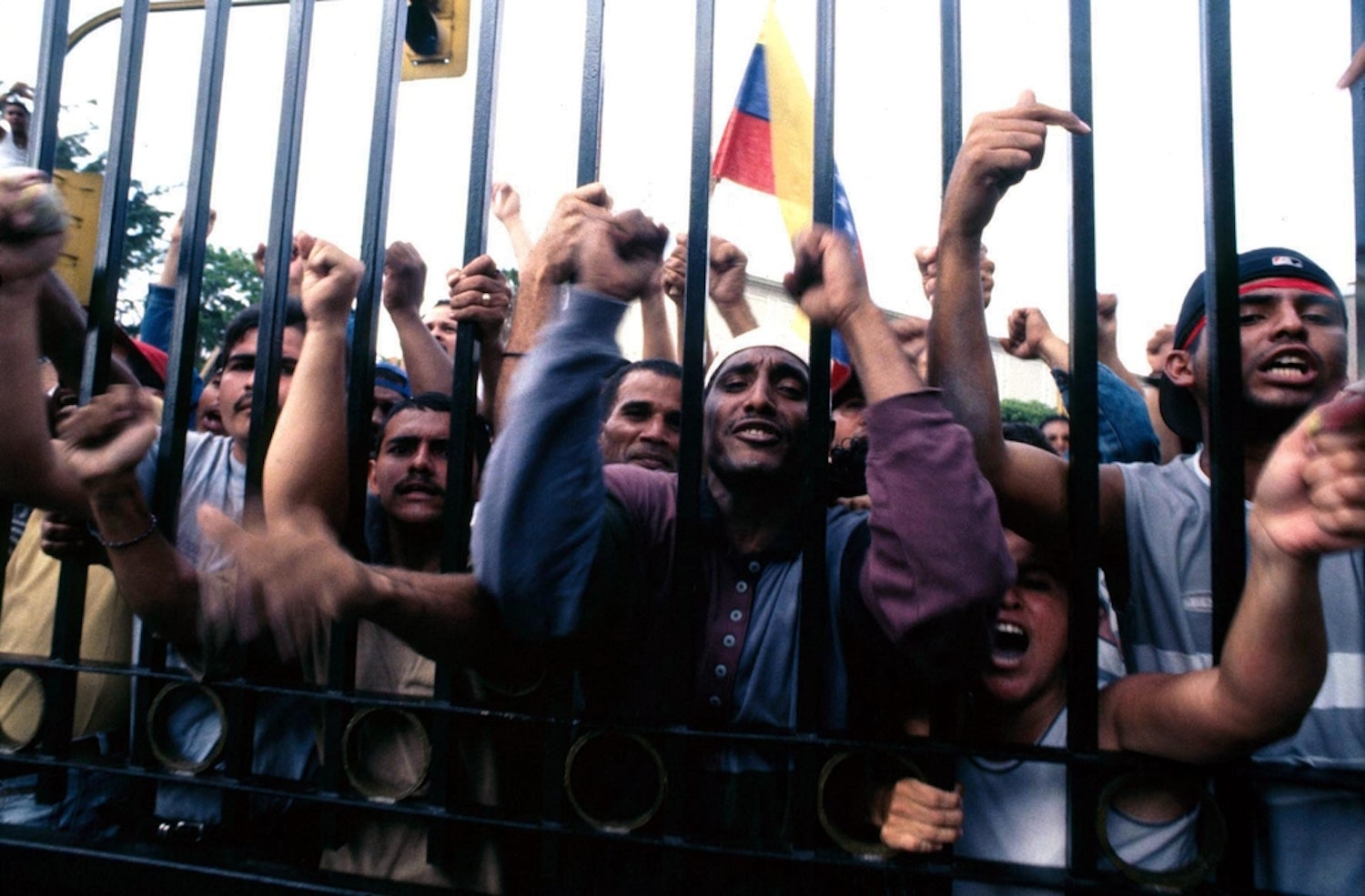 A man, a friend, a hope
The people say that was a visionary, a man with deep moral and ethical values, a seasoned llanero who was not daunted even when looking into the jaws of the empire.

According to testimonies collected by the United Socialist Party of Venezuela (PSUV), Juan Mujica, university professor and social communicator, said that Commander Chávez taught his people to love La Patria, to apply social justice, to be humanist, and to promote equality and respect for others. “How much we need the eternal President; you will live forever,” Mujica said. 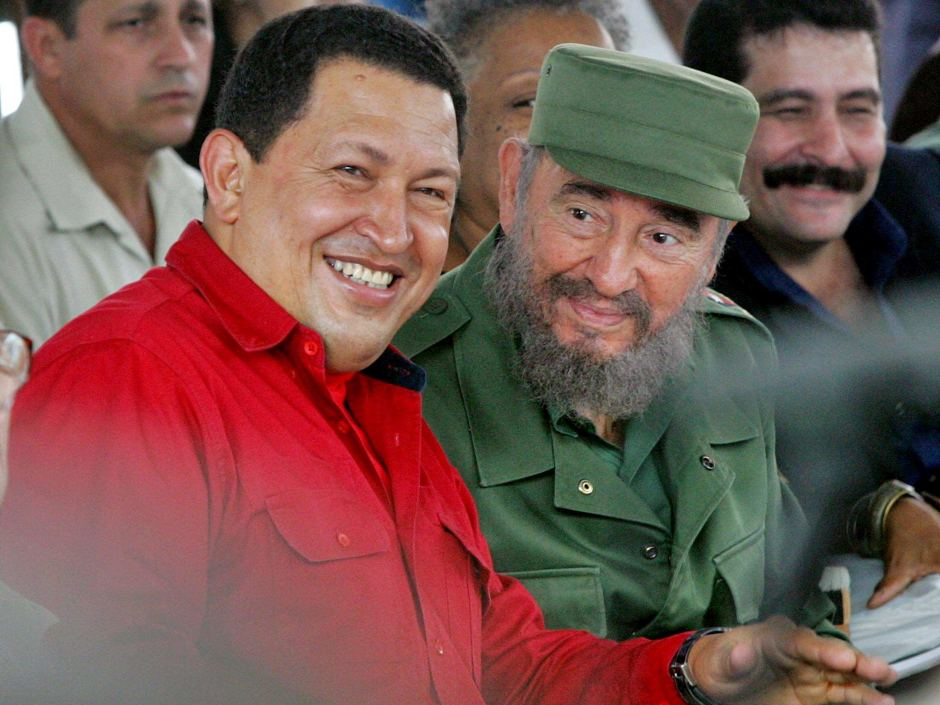 For Francisco Sánchez, Hugo Chávez was a spark that provided light to those most dispossessed and excluded by other governments: “Chávez will never die, his work will remain in our memories and hearts forever.”

“Saying Chávez is synonymous with equality and a Great Homeland,” said Olga Ordoñez. “Chavez is for me the hope of the poor, of a people that was submissive to the interests of the empire. Hugo Chávez is love, he is solidarity, affection and respect.”

A before and after in the history of Venezuela
On March 5, 2013, the news of the death of the leader of the Bolivarian Revolution, Hugo Chávez, marked a before and after moment in the history of Venezuela and the world. That Tuesday afternoon, pain took over the country after the then vice president of the Republic, Nicolás Maduro, accompanied by other high authorities, reported on radio and television that Chávez had died at 4:25 p.m. in Caracas.

The announcement, issued from the Military Hospital located in the Venezuelan capital, where the president had been hospitalized since February 18, generated tears in the population that were felt in every corner of the country. Caracas was suddenly tainted in red by the tide of Chavista mourners who inundated the streets of Caracas to accompany him from the hospital to the Military Academy.

More than two million people attended the Military Academy to bid farewell to the Venezuelan leader.

Phrases that immortalized him
• “All my life and out of love for a people, I will dedicate every last second of it, to the fight for democracy and respect for human rights. I swear.”
• “For Christ, the greatest socialist in history, for all the pain, for all the loves, for all the hopes, I will enforce the supreme mandates of this wonderful Constitution, even at the cost of my own life.”
• “Here I stand firm. Send me the people, that I will know how to obey them. I am a soldier from the people, you are my boss.”
• “Every day the world is more hopeful with the Bolivarian Revolution. We cannot fail the world. The future, the salvation of this planet, may depend on what happens in Venezuela, on the success of our revolution.”
• “The empire should not be underestimated, but neither should it be feared. Whoever intends to carry out a project of transformation will inevitably collide with the North American empire.”
• “We will continue fighting for the true unity and integration of our peoples, but it is not with imperialism that we are going to unite. The empire did enough damage to Bolívar’s project.”
• “In Latin America they want to impose on us the model of democracy designed by the United States, and whoever does not agree to enter that lane, they accuse them of being a radical populist, terrorist, and dictator.”
• “We are beginning to see what the founding father imagined: a great region where justice, equality, and freedom should reign—a magic formula for the life of nations and peace among peoples.”

In the Mountain Barracks
The Eternal Comandante Hugo Chávez Foundation invited the Venezuelan people to commemorate 68 years since the birth of the leader of the Bolivarian Revolution through various activities that began on July 24 and ended July 28. 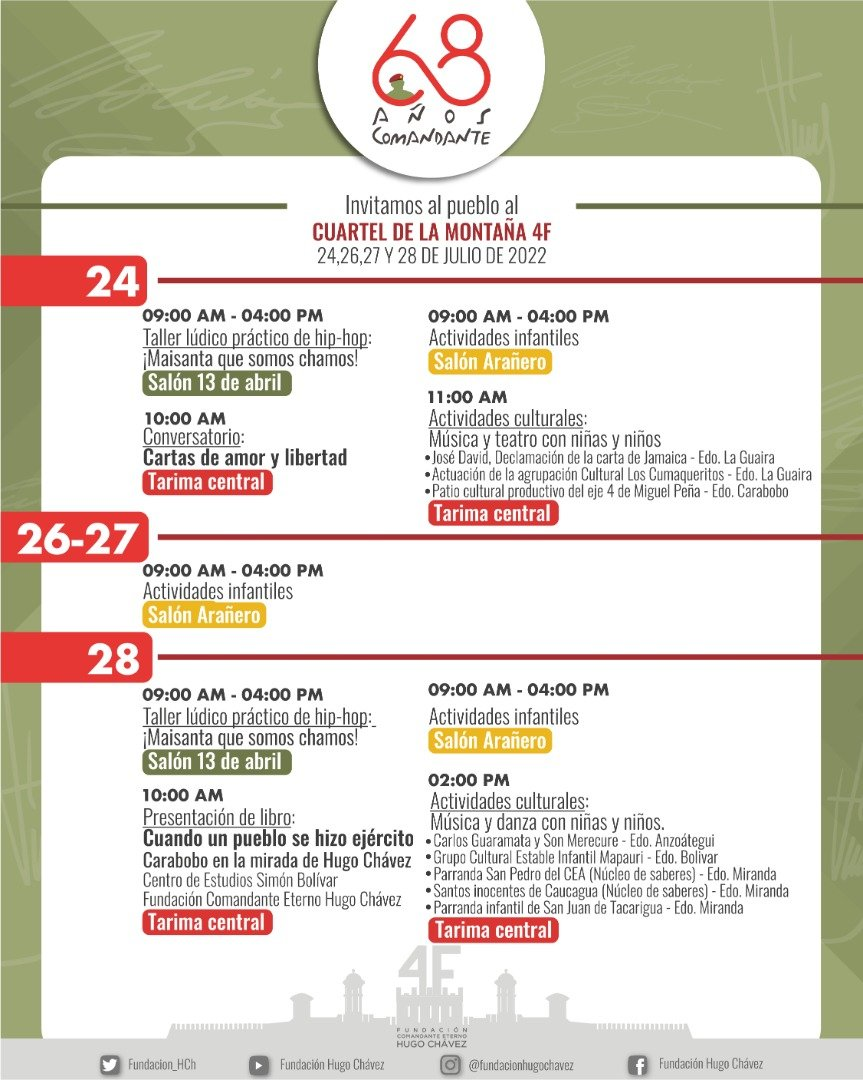