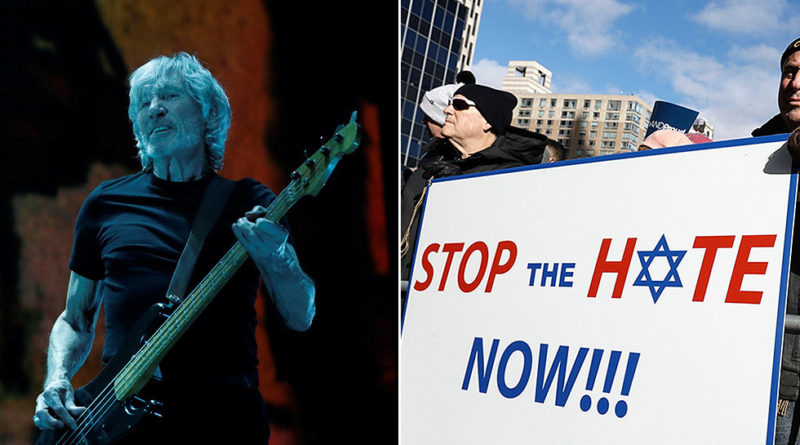 Musician and activist Roger Waters is the latest public figure targeted for cancelation on charges of anti-Semitism, but the heavy-handed pressure tactic is actually doing advocates of Israel more harm than good.
Waters got advertisements for his concert tour yanked from Major League Baseball platforms, after the Jewish organization B’nai Brith wrote an angry letter to MLB last month.

The former Pink Floyd guitarist is an “individual with an alarming history of anti-Semitic hatred” and his views on Israel “far exceed the boundaries of civil discourse,” the letter said. The MLB responded in private, then announced on Saturday there were “no plans to schedule any more ads.”

RELATED CONTENT: US: Abby Martin Banned From Speaking at US University For Refusing to Sign Pro-Israel Pledge

What got Waters ‘canceled’ was his support for the Boycott, Divestment and Sanctions (BDS) campaign against Israel. The Palestinian movement is modeled after the campaign against apartheid South Africa, which eventually led to the adoption of majority rule there in 1994. Israeli authorities have declared that the true aim of the BDS is to delegitimize Israel and wipe it off the map.

None of that has anything to do with baseball – or with Waters’ “This is Not a Drill” tour, for that matter, seeing as it revolves around the message that “we need to change the way we organize ourselves as a human race or die.”

The US has become a major battleground for both sides in the BDS fight, however, with 27 states passing laws that refuse contracts to anyone engaging in a boycott of Israel. Former RT host Abby Martin – who most recently produced a documentary about Gaza that was highly critical of Israel – recently ran afoul of that law in Georgia, where she was blocked from speaking at a media literacy conference.

This censorship of my talk based on forced compliance to anti-BDS laws in Georgia is just one level of a nationwide campaign to protect Israel from grassroots pressure. We must stand firmly opposed to these efforts and not cower in fear to these blatant violations of free speech. pic.twitter.com/Saj5IPY4sl

Martin announced on Monday that she is suing Georgia for First Amendment violations – the part of the US Constitution that prohibits limits on freedom of speech – with the support of the Council on American-Islamic Relations (CAIR), a Muslim pressure group.

Allegations of anti-Semitism have been leveraged as a political weapon to sway European elections as well. In the run-up to the 2019 British general election, the Labour Party and its leader Jeremy Corbyn had been hit with a steady stream of anti-Semitism accusations, due to their criticism of specific Israeli policies.

Although it is impossible to gauge precisely how much this campaign influenced the vote, many political analysts subsequently pointed to it as one of the factors that contributed to Labour’s wipeout in the polls, including Corbyn himself losing his seat in Parliament.

When Slovenian philosopher Slavoj Zizek stood up in defense of Corbyn, he too was tarred with the same brush, with critics latching onto his choice of phrasing.

Right now, the accusation of ‘anti-Semitism’ is the political and social equivalent of a nuclear weapon. This is part of the problem with using it so freely to shut down any and all criticism of Israel – much like the term ‘racist,’ overusing it may lead to it losing all its power against actual racists and anti-Semites. It works for now, and will work for a while yet – until some day soon it doesn’t anymore. People can only handle so much hyperbole before they become inured to it. Not everything is the second coming of the Holocaust, and arguing otherwise only cheapens its horrors.

Worst of all, invoking it to shut down speech – however hateful one may find it – actually fuels the very tropes promoted by actual anti-Semites about ‘Jewish control’ of the media and politics. At the end of the day, the argument of force can never truly replace the force of argument, and sunlight is usually the best disinfectant.

Featured image: (L) Roger Waters, the latest celebrity target of ‘anti-semitism’ accusations for his support of BDS © REUTERS/Mario Anzuoni; (R) Demonstrators hold placards during a No hate no fear solidarity march in New York, US © Getty Images / Echoes Wire / Barcroft Media / John Lamparski
Nebojsa Malic is a Serbian-American journalist, blogger and translator, who wrote a regular column for Antiwar.com from 2000 to 2015, and is now senior writer at RT.