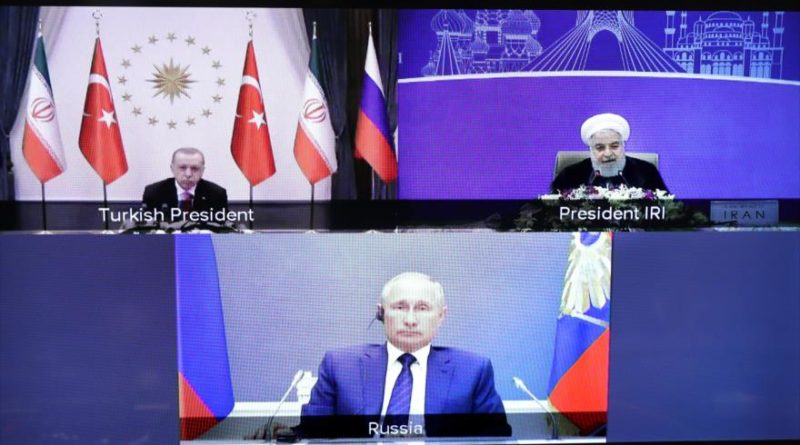 All countries must respect the sovereignty and territorial integrity of Syria, abiding by international resolutions, Iran, Russia and Turkey agree.

In a tripartite virtual summit held this Wednesday to address the current situation in Syria, the presidents of Iran, Russia and Turkey, Hasan Rohani, Vladimir Putin, and Recep Tayyip Erdogan, respectively, have renewed their strong commitment to respect national sovereignty, Syrian territorial integrity and dealing with separatist attempts that seek to disintegrate the Arab country.

In a statement issued at the end of the event, the parties have insisted on the importance of “respecting internationally recognized legal decisions” such as resolution 497 of the United Nations Security Council (UNSC), which rejects Israel’s decision to dominate the Golan Heights.

In this regard, the leaders have condemned the US decision to recognize in March 2019 the Israeli sovereignty over the Syrian Golan, which “flagrantly violates” international law and “risks” peace and security at the regional level.

Rohani, Putin, and Erdogan have agreed that the “destabilizing” attacks by the Tel Aviv regime against Syria “violate the national sovereignty and territorial integrity of the Arab country” and “fuel tension” in the West Asia region.

There are no military solutions to the Syrian conflict

Iran, Russia and Turkey, three guarantor countries for peace in Syria, have emphasized that the Syrian conflict does not have a military solution and will only be resolved through diplomatic channels between the Syrians themselves, adhering to UNSCR resolution 2245, which supports respect for the sovereignty and territorial integrity of Syria.

In this regard, the parties have underlined the important role played by the Constitutional Committee for Syria, which was the result of the agreements reached between the countries that guarantee peace in Astana (Kazakhstan) and Sochi (Russia).

Likewise, they have welcomed the forthcoming celebration of the third summit of the Constitutional Committee for Syria, scheduled for August, and have expressed their support for the results of that appointment and the carrying out of regular contacts with the members and the special envoy of the United Nations Organization for Syria, Geir Pedersen.

Iran, Russia and Turkey insist on continuing fight against terrorism

Rohani, Putin and Erdogan have insisted on continuing cooperation to completely eradicate terrorist groups such as Al-Qaeda, ISIL (Daesh, in Arabic) and the Al-Nusra Front (self-proclaimed Fath Al-Sham Front).

Regarding the tense situation in the province of Idlib (northwest), the parties have urged the full implementation of all the agreements reached, in an attempt to reduce tension and violence in this area.

They have also expressed deep concern about the delicate humanitarian situation in Syria, aggravated by the new coronavirus causing COVID-19, and have demanded help from the international community to needy Syrians without discrimination or preconditions.

Iran, Russia and Turkey, in addition, have agreed to increase the level of economic cooperation and carry out a new round of dialogue within the framework of the Astana process, in Tehran, the Persian capital.