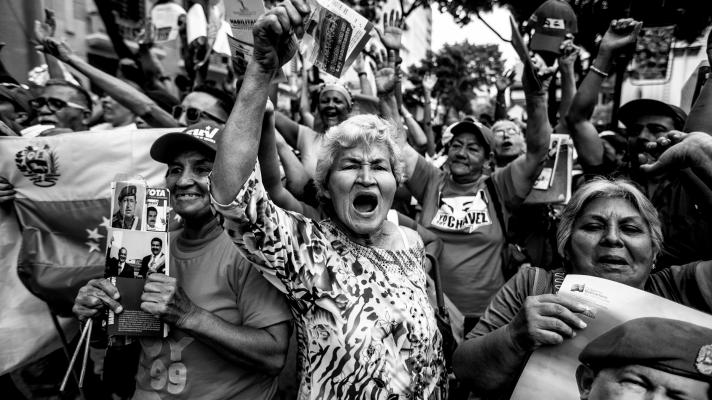 Since Commander Chávez appeared in the Venezuelan political scene on February 4, 1992, with his “for now”, and thereafter proposed a Constituent Assembly to begin to build ourselves as a country, we had not heard a presidential speech for a long time that would place us in stark reality.

The speech delivered by President Nicolás Maduro on January 10, 2021 will mark a new route for a long time. Beyond the anecdotal aspects, one can refer to the substantial and transcendent in that pronouncement. It is a discourse that speaks to all of us openly, to each one of us who places oneself and accepts the tasks, to each one with their own dose of reality within the reality, to each one their sincerest truths, to each union, to each party, to each trend, to each businessman, worker, peasant, man or woman, and frames us with the causes and transports us to the consequences.

The speech calls us to take sides in the construction of the country, even for dreaming. It clarifies the role we play as a people; it takes us back in history and makes us realize who the real thieves and criminals who have plundered this territory are and have been; it connects us with the facts and takes us to international conflicts explaining the reasons for so much anger against us by those who consider themselves the owners of the world. It clarifies that much greater than our natural resources is the example that we as a people are giving to the world.

Now, what role will each of us play? Because from now on there is no valid justification. Entrepreneurs can no longer justify that the State does not provide for them, because they must invest if they want to win. They can no longer provide as excuse the lack of attention or the need for laws; if one claims to be an entrepreneur then the risks are one’s own as well as one’s profits, and it is lazy to intend to earn without investing. This country is already tired that for five hundred years a handful of loafers, disguised as good people and decent families, has been stealing from it to the point of depletion.

No longer can any official justify themselves or take refuge in “the situation of the country” to hide their laziness, their indolence, their incapacity, their insensitive laid-back attitude, when the official is supposed to be at their post by conviction and not be just there. And we are talking about deputies, ministers, generals, governors, directors, mayors, party members, and other organizations that claim to work for or serve the people.

Likewise, the left or the lefts [as President Maduro sometimes refers to them], in the face of this reality, should retake their flags and reformulate working methods. They should be more straightforward in the face of overwhelming evidence that Chavismo has the upper hand now, and get to work on the country to be built. They have to honor the fallen, not with pamphlets, clichés and hollow slogans, but from reality, by working to make real the dreams of those who have fought in this earth for a culture other than that of exploitation that is expressed by the ideology of Humanism and its apparatus of production, capitalism.

On the other hand, unions of all kinds must abandon the policy of complacency, of wanting everything to be provided to them, of blackmail, of promoting sectarianism, and should try to think of themselves as an important part of a country to be built, a territory to be loved, to which we owe daily affections, for which we must band together shoulder-to-shoulder so that in future this country will be a shelter for our own and for others.

And finally, we, the common people, irrespective of being part of unions or not, part of the State or not, party members or not, Escuálidos [right-wingers] or Chavistas, unemployed or at any work, insulting or flattering our ego from one side or the other, whether religious or political, yes, we, the common people, are placed in our rightful place by this speech. We are the heroes and heroines of this time, in this territory called the Bolivarian Republic of Venezuela, and we do not need to provide any explanation to politicians, sociologists, historians and intellectuals in general, who continue to underestimate us as they always have, or even to ourselves, who, for whatever reasons, keep underestimating ourselves in the same way.

Well, it is time to get up and start thinking with our own brain, which we have exactly for that purpose, as the president has said and the Commander Chávez always said, without us it would not have been possible to have reached where we have arrived. But it is not enough, as the poet Carlos Angulo says: “it is further to go back than to keep moving forward.” It is our turn now to carry out perhaps the most difficult task that any people have ever carried out on this planet, in all its history—the collective creation, from scratch, of a culture that replaces the present one.

We have been told by family and school that our role is to work, at most to study to be someone in life, but that has always been a trap, cheap ideology, circus illusion. We have a brain like any other person, we just have not trained it for politics. But the Commander always advised us that we should think, that it is not enough to do things, that the most important thing is to think, to know ourselves, to be proud of ourselves, to design the future together. To create the material conditions for these events to occur, we need to resolve together and not go around asking for what pertains to basic needs, shelter, food, footwear, clothing, in order to be able to think differently.

With this discourse we must know what to expect; we must be enthusiastic in the search for collective thinking, not just the collective. The tragedy of our times forces us into this thinking, we must not go looking for magical solutions to problems; each problem has its solution, and it is up to us to think and solve each problem.

The process is not written in books; it has to be learnt in the streets, and by the time we learn it, it will be already old.

There is no time to sit down and rest, we just have to live it. It is good to remember that we as a people have contributed since 1810 to the freedom of other peoples and our own; those of us who could, we returned to a world that has continued to scold us, and beside us are those who could never return and were exterminated and treated as criminals. Since then, the memory of a feat remained where, in spite of us being the protagonists, the power that be took charge of teaching us that we were never there and that we were never a people of liberators.

RELATED CONTENT: Philosophy of the Revolution; Ethics of Revolutionary Love

Today we start again (1989) from the feeling that together we are intact, that we have to be together shoulder-to-shoulder, and from the idea of retribution that love is repaid with love. This time we must learn to think what we feel, we need to have conscience; we must connect the heart with the brain, nails with hair, and laughter with tears. But this time we must not go back or leave in the hands of others what we have to build ourselves.

In this crucial cultural juncture, it is proposed that we adopt a new point of view to look at the ways in which people have solved the problems that each historical period brought to them. Once again we say to the world, through practising our principles, that things can and should be done differently. This time deserves a calm and long analysis, because this should not be the leap of a child in a hurry. History shows us that this world was built in haste and its result is fatigue.

We are in a time when everything has to be thought out thoroughly so as to fall into any trap creating the illusion of magical solutions. The poor and the oppressed of the world have endured in ten thousand years all the rigors that the opulence of a few has made and that has made us wise and patient.

Let us seek together, among ourselves, the keys that make possible an ethic of the heart, with which we can confidently inhabit this world. From time to time, peoples renew themselves, and with themselves their way of production and their view of the planet.

At one time it was faith and at another, reason, now we may think of harmonizing heart and brain in living confluence with the rest of the universe, without ideologies or power that might stop the feeling and the thought of millions of beings that together, coming from thousands of lonely roads, we meet to greet and embrace in joy.

We cannot miss the signs that, as signals, demonstrate to us the social dynamics in the framework of the deterioration of the humanist culture, so that the efforts that millions of poor people on the planet are making today do not end in a better tomorrow, once again, looking for a scapegoat or blaming communism or socialism or, ultimately, chavismo.

There is no rush, life is not going to disappear; from now on, calmly, let us begin the first mental exercises on the possible physical reality that is to be built in harmony with the natural reality, without being affected by the ideological reality of each one of us. This is precisely the great unknown that we, the poor and the oppressed, must solve after thousands of years of the rich and the powerful getting stronger every time that history was repeated. Let us not be afraid to think, for thinking does not kill. Creating another culture is a great adventure. We have a blank slate in front of us, and we just have to use our brains to create something different. All this may seem to be, and even be, madness, a gigantic madness, but this madness is preferable to the cowardice of maintaining the status quo.

Featured image: Chavismo is a powerful historical force with the opportunity to create its own ideology (Photo: The New Yorker).