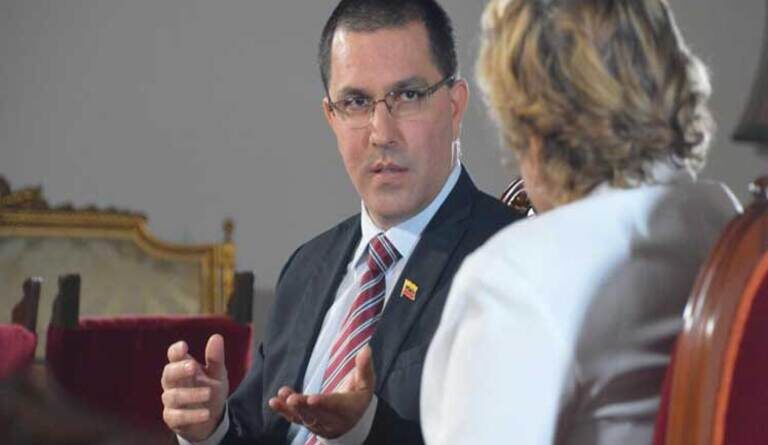 The Venezuelan Minister for Foreign Affairs, Jorge Arreaza, categorically stated that Venezuela has become a principal target of the United States and its allies in their international strategy, because the South American nation has not submitted to US interests. Instead, it has consolidated the struggle for the defense of national sovereignty and independence. “For years, the governments of our country have been servile to those interests and allowed the looting of our resources, which changed totally with the triumph of the Revolution,” said Arreaza.

In an interview for the section Escáner of Prensa Latina, Arreaza recalled that the triumph of the Bolivarian Revolution at the dawn of the 21st century marked the beginning of a new era of transformation, of a turnaround of Venezuela’s position in the face of hegemonic interests of the US government.

“This attitude of dominance,” highlighted Arreaza, “marked by the framework—the apparatus of corporate, military, technological, industrial and financial interests—leads to Washington’s obsessive goal of controlling Venezuela.”

Prensa Latina also referred to the recent report by Alena Douhan, UN Special Rapporteur on the Negative Impact of Sanctions on Human Rights, who recognized that “both the Venezuelan State and the Venezuelan people are suffering from the consequences of the unilateral coercive measures systematically imposed by the United States since 2005.”

Speaking on this matter, the Venezuelan diplomat underlined that “these unilateral and arbitrary coercive measures that lead to blockades are outside international law,” and highlighted that one of the principal themes of the Venezuelan foreign policy is denouncing the illegality of the blockade imposed by the United States.

In response to a question on the new and evolving geopolitical panorama in Latin America, Arreaza described it as a scenario of transition guided by a climate of hope, something that the United States and the financial centers of the imperial power strongly dislike. “Irrespective of who occupies the White House, the essential objective of all US administrations will always be to control and subjugate Latin America and the Caribbean,” he emphasized.

“Our peoples won in the first decade of this century,” continued Arreaza, “because various governments, some more popular than others, but all having a range of revolutionary and progressive policies, with a lot of organizational capability for integration and dealing with international challenges, were able to win power in their respective countries.”

The Venezuelan politician added that this situation worried the United States, and “we saw how they started intervening in Honduras, Paraguay, Brazil, and Bolivia, and at the same time intensified their actions to destabilize Cuba, Nicaragua, and Venezuela, with the aim of installing right-wing governments to ensure servility and dependence.”

“Servile governments, which when ordered to attack Venezuela, will do that; if ordered to orient their economies according to the International Monetary Fund (IMF), will start privatizing everything,” said Arreaza. “If told to produce more [illegal] drugs, they will do that and will also protect those operations; this is how they work,” he added.

The diplomat explained the current correlation of political forces in Latin America, stating that “Mexico, Argentina, Bolivia, and more recently the probability of winning in Ecuador, demonstrates that despite certain differences, these governments are thinking for their people. They have a sense of what their people need, and they are going to act in a coordinated manner. This is not something random or a simple swing of the pendulum.” He added that the United States and the decaying capitalist system are going to have a difficult relationship with these countries. Not being able to impose their own interests on these countries, “they will have no other alternative but to negotiate with them on a basis of respect.”

Along these lines, Arreaza emphasized that “the destiny of our America is to get united, to face our problems and explore our potential together. It is necessary to accept this reality.”

Prensa Latina reported that Arreaza, making reference to a game of chess, expressed a strong conviction that at a point of time in near future, Latin America, facing its imperial adversary, may move its pieces on the board in a very different manner, with the goal to defeat the “emperor” and “to checkmate its neoliberal policies.”

The article published by Prensa Latina made a summary of all the unilateral coercive measures imposed by the United States against Venezuela. It also cited the UN Special Rapporteur, who provided evidence in her report of how the illegal actions implemented by the US are preventing the development of Venezuela because of the havoc wreaked by those actions on the national economy, apart from obstructing access to food and medicines. All this has led to “devastating” consequences for the people, creating a crisis that has caused many people to emigrate from the country, separating thousands of families.