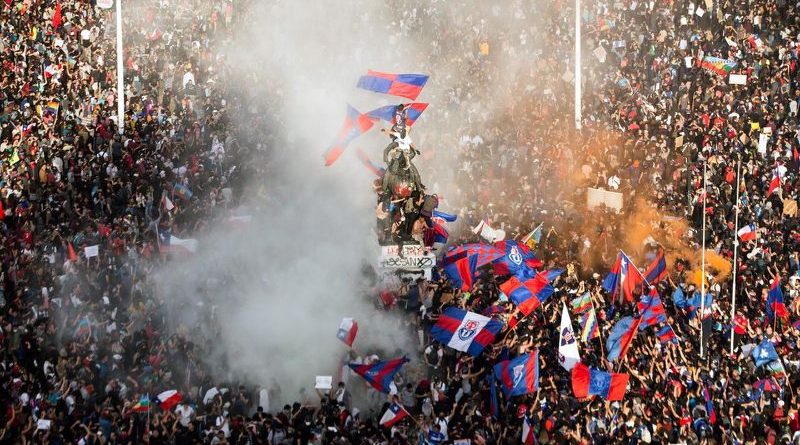 Jesus Rodriguez Espinoza is the editor of the Orinoco Tribune and a former Venezuelan diplomat to the United States. Jesus spoke with MASS ACTION from Caracas, Venezuela on Oct. 28.

MASS ACTION: Jesus, I would like to start with the recent election results in Bolivia and Argentina, not because I think they’re more important than the rebellions that have happened, the protest movements that have happened. But, I think considering that not too long ago things didn’t look that great in terms of the continuance of the rise of the so-called “Pink Tide” in Latin America, the election results for “the left” are a very encouraging and also a very important development. It’s sort of a historic development when things were going in the opposite direction – like in Brazil for example. U.S. imperialism, the right wing in Latin America, the elites, they haven’t been able to capitalize on the momentum that seemed all in their corner just a few short years ago. What do you think?

Jesus Rodriguez Espinoza: That’s true. Let me start by talking about Bolivia*. The way we see it here (from Venezuela) it is more than evident that regarding the right wing narrative about fraud or inconsistencies or delays in the election process, since the very beginning when president Evo Morales announced the victory last Sunday, he said, listen, we won. He said we have to wait until all the results are in from the countryside, from the mountains but we believe we are going to have, because those areas are usually indigenous and usually supportive of me – that we’re going to have the 10 percent to win.

I believe that there is no way for anyone with any brains to question the results. The elites are going to try to create some disorder, to break the rule of law perhaps. But I think that they have been losing traction according to what I’ve seen so far. I also believe that U.S. state department would like to try to replicate the Venezuela experiment in Bolivia. Carlos Mesa (the opposition to Morales) might be a right winger in every sense, but he has been in politics for the last 30 years or 40 years. I don’t see Mesa becoming Washington’s answer. The guy is a professional politician and not the new face they would need. He’s a puppet. It’s kind of crazy that they would back Mesa, in my opinion.

MASS ACTION: When you say crazy, I’m thinking about the situation. It seems odd to me that the United States would even try to move on Bolivia at this point. Morales is in a pretty strong position. He’s popular. The economy is not bad. In fact, the economy is good. He’s helped to greatly decrease the income gap, provide services, etc. Obviously, there’s a right wing in every country and in every country in Latin America there are the wealthy that can easily work with the United States, but it doesn’t seem to be at all one of the strongest plays that they could make. It seems like it could quite easily backfire. Venezuela has, so far, come out ahead and even in some ways maybe strengthened itself despite the U.S. attacks. Obviously, the problems in Venezuela are real and the sanctions and the war on Venezuela is real. But it just seems to me like the imperialists, they’re probably not making the best choice here, honestly. Right?

Jesus: Yes. I really think that it’ll be harder for them to replicate the regime change operation that they tried to use in Venezuela in Bolivia. That’s my perspective at least, but the U.S. state in recent years has specialized in doing crazy things.

MASS ACTION: Well, that might just speak to the fact that there is a real resistance from the masses of people in Latin America, a resitance that is standing in the way of imperialism. Latin America has such a huge wealth gap between the wealthiest and the poorest. There’s just a lot of poor people in Latin America because of the imperialist’s aggressive policies, because of imposed neoliberalism, because of national capitalist elites. I don’t think it has been possible for the United States, for the imperialists, to get a firm grip on a strategy for Latin America. In Bolivia, probably the right wing presented themselves as a possibility – during the election (the United States sure does love to use elections to destabilize) – to attack Morales. There were probably some discussions and they said let’s put some pressure on him if we can. Morales has never really had that much pressure on him. Maybe they are just taking a gamble wherever they can to get some type of foothold. I think the Trump administration does signal an obvious attempt to be more aggressive in Latin America. I think there’s a strong feeling in U.S. foreign policy circles that something has to be done about what they think of as their backyard.

Jesus: Yes, that’s true. That’s the approach I see they are trying to use. It’s also true that there are some disparities. There is a big gap between the wealthiest and the poorest in the region. But our people in Latin America, if you ask me, in our core, we are anti-imperialist by nature. So if maybe for some reason in one particular moment in history like the one that we are living in – I hope that we are getting out of it – the people in our region for one or another reason decided to give a chance to the right. But it’s in our core. We are anti-imperialist and we know what the U.S. is. So that’s what I see is happening with the elections, especially with the one in Argentina and Uruguay and what happened in Colombia also in the local elections they held yesterday in Colombia. From my perspective and according to the recent election results, Latin America is going back to the left. I was very happy when I was posting some information in the Orinoco Tribune last night as the election results started coming out.

MASS ACTION: Going to the left. That definitely seems to be the case especially if we bring in the rebellious protests that are happening as a response to neo-liberal austerity and the income gap. I think it shows … there’s all different components and characteristics of the struggle in Latin America, different components of the left and the working class, the indigenous, etc. … I think it speaks to the fact that there’s been an increase in the level of the confrontations. The protests in Chile and elsewhere have been met with violence. There is a real growing conflict in which the masses of people are ready to take matters into their own hands again. You can see that in Haiti as well. We see it in Ecuador and now in Chile where president Piñera said this is not going to happen here like the day before it happened. Right?

Jesus: The kinds of uprisings like the ones in Chile, Ecuador and Haiti show to the political class in those countries that they won’t be able to do whatever they want without paying the price. You know what I mean? Those uprisings, those rebellions have an important political message for the right-wing elite running those countries. The riots, the uprisings change the political relations in the region. That’s why yesterday when I was talking about the Uruguayan elections, when we posted on Orinoco Tribune a review of the results of the elections – at the end we posted some information that was already there about the chances for a left party, Frente Amplio, to win the second round. Daniel Martinez from the Frente Amplio won the first round of voting for president with a number (40%) very close to the most optimistic of the polls that we saw. And also the Colorado Party which came in third in the election didn’t have the same results as what the polls were saying. They received less votes than expected. So, even though most of the analysts say that the second round is going to be complicated for the left in Uruguay, I believe that the numbers of the elections and with what has been happening in the region, like the victory of Evo Morales in Bolovia, Fernandez in Argentina and these uprisings that we have been talking about – I believe the left in Uruguay is in a very good position.

MASS ACTION: Okay. I think if you take everything together that we’re talking about here – though there’s a lot of struggle ahead …

Jesus: And everything is connected somehow.

MASS ACTION: Yes. I think even if we tried to disconnect these things we cannot. If there’s a rebellion in Ecuador which forces the government to flee the capital, if there’s a rebellion in Chile where it wasn’t supposed to happen, a rebellion that forced the president to back off raising the subway fees, how can we deny that those are not organically linked to the electoral successes in Bolivia for example, or to the fact that Venezuela has withstood a withering attack from U.S. imperialism? All of these things are good, are positive, and I think they can and will only buoy the movement in Latin America and beyond. We don’t know what will happen tomorrow and we don’t know the future. But the rebellions and electoral victories are hopeful. Very hopeful.

Jesus: Yes. Thank you for the solidarity. One last thing. It’s very important to tell the people of the United States about – because no one talks about it there – the day to day life of Chavistas and the resiliency that we have been showing in order to survive the U.S. sanctions and the economic crisis caused by the sanctions.

MASS ACTION: We will definitely keep spreading the good word about the Venezuelan revolution far and wide. Thanks Jesus for talking with me.

*Since this conversation took place, the attacks on the Morales government have escalated. Jesus suggests we read the following article, Time of Coup Offensive in Bolivia.