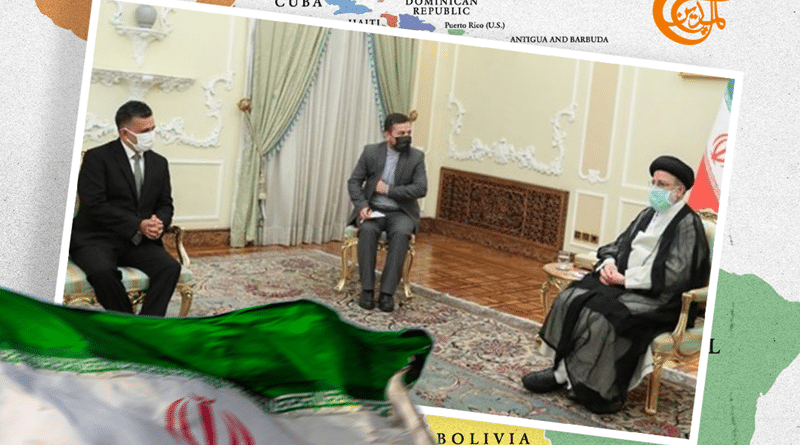 The leftist governments of Venezuela, Cuba, Nicaragua, and Bolivia have found a key strategic ally in Iran, the heart of the Axis of Resistance.

This budding alliance is an extremely important development in the struggle against an authoritarian international political and economic system that is essentially a global dictatorship, ruled by the United States and its junior imperialist partners in the European Union, NATO, apartheid “Israel,” and the Gulf monarchies.

As this Washington-led, trans-Atlantic hegemonic order was constructed over the past century, through a long series of wars, military occupations, foreign interventions, coups, regime-change operations, assassinations, and grossly unequal trade arrangements, two regions of the world have been especially targeted: Latin America and the Middle East, or more accurately West Asia.

Both regions have plentiful natural resources and are very geostrategically located. Latin America has vast mineral reserves and agricultural products. West Asia has a plurality of the planet’s hydrocarbon reserves, and connects Europe to Asia, sitting right in the middle of what geopolitical analysts have long called the “World Island.”

Given their status as principal targets of Western imperialism, it only makes sense for resistance forces in these regions to unite. Attempts at forming such an alliance had been made in the past – revolutionary Palestinian militants trained in Cuba and with Nicaragua’s Sandinistas, for instance, and Muammar al-Qaddafi’s Libya supported leftist Latin American guerrillas – but this collaboration was historically limited in scope.

That is, until recently. As the United States accelerated its hybrid warfare to try to re-colonize Latin America and West Asia in the 2000s, indigenous anti-imperialist movements in both regions joined forces, forging not only close political ties, but economic relations as well.

The leftist governments of Venezuela, Cuba, Nicaragua, and Bolivia have found a key strategic ally in Iran, the heart of the Axis of Resistance.

Revolutionary ALBA member states unite with Iran
The director of the main instrument of Latin American economic integration, the Bolivarian Alliance for the Peoples of Our America, known simply as the ALBA, took a historic trip to Tehran this August to meet with the new Iranian President Ibrahim Raisi.

“Iran and the ALBA have a lot in common, and both seek to defend the independence and sovereignty of nations and confront the outrageousness of the United States,” remarked the ALBA’s executive secretary, the Bolivian diplomat Sacha Llorenti.

For his part, Raisi kicked off his new administration calling for strengthening relations with Latin America, stressing that it is one of Tehran’s top foreign-policy priorities.

“Iran is determined to develop its political and economic relations with the member states of the ALBA-TCP,” Raisi said, highlighting “the shared values and positions of both parties.”

“There is no doubt that a greater development of the relations between Iran and Latin American countries can halt the North Americans and other arrogant countries,” Raisi added.

Joining Llorenti in Tehran were top officials from Venezuela, Nicaragua, and Bolivia—all member states of the ALBA.

In a meeting with Venezuela’s vice president of planning, Ricardo Menéndez, Raisi stated that “Iran and Venezuela alike have common interests and enemies. We have always shown that with resistance and wisdom, we can thwart the plots of the United States and world imperialism.”

Nicaragua’s Foreign Minister Denis Moncada met with Raisi as well, and called for strengthening relations with Tehran. The Iranian president praised the Central American nation’s Sandinista government as a model of resistance against US aggression, and said, “The people of Iran have always wished for success and victory for the revolutionary nation of Nicaragua.”

Likewise, in his meeting with Raisi, Bolivian Foreign Minister Rogelio Mayta pledged to work more closely with Iran, stating, “Despite sabotage by the United States, we are determined to increase the level of relations with Tehran in all areas.”

Iran and Venezuela resist illegal US blockades
Iran’s support for revolutionary governments in Latin America goes beyond mere words. While many liberal and center-left political forces in the region have opportunistically turned their back on Venezuela, betraying their neighbor on behalf of Washington, Tehran has shown real, tangible support for Caracas.

Both Venezuela and Iran are suffering from illegal US blockades, and these murderous sanctions have led to a shortage of food, medicine, and gasoline. (Venezuela has massive oil reserves, but it is some of the heaviest crude petrol on the planet, which cannot be used or exported without first being refined, so Caracas needs to import lighter crude or other materials that are blocked by Washington.)

To help meet the needs of the Venezuelan people, Iran has repeatedly defied the criminal US blockade and delivered supplies to Caracas, sending huge tankers full of food, medicine, and fuel.

In these altruistic acts, Tehran has valiantly risked US military aggression, putting its money where its mouth is to support the revolutionary government and people of Venezuela.

Iran has also opened a supermarket chain in Venezuela, called Megasis, to help support an ally that is heavily reliant on food imports. It is part of a larger strategy to boost bilateral trade and economic cooperation between both nations.

The brotherhood between Venezuela and Iran was most poignantly illustrated at the 2013 funeral of President Hugo Chávez, who initiated the Bolivarian Revolution. Iranian President Mahmoud Ahmadinejad was photographed hugging and consoling the Venezuelan Comandante’s crying mother.

In the last 400 years the world powers have either slandered or assassinated the character of the champions of freedom, and independence. Chavez is alive until freedom, justice, and humanity is alive. God bless Him. pic.twitter.com/x08q2HH58K

Venezuela, Cuba, Nicaragua, and Bolivia vociferously opposed and condemned the US-led imperialist proxy wars against Libya and Syria, which expressly sought the collapse of the nations’ central governments, and succeeded in the former while failing in the latter.

Similarly, these ALBA member states have all shown unflinching solidarity with Palestine. In response to apartheid “Israel’s” 2008-2009 massacre in Gaza, Venezuelan President Chávez officially broke ties with the Zionist regime, denouncing it as a “genocidal state” and “the murderous arm of the US government.”

Then in 2010, in a daring challenge to Washington’s declaration that Iran, Iraq, and North Korea constituted a supposed “Axis of Evil,” Comandante Chávez announced an alliance with Syria, which he dubbed the “Axis of the Brave.”

The Axis of the Brave was a “strategic alliance” against US imperialism, Chávez explained. “A new world is being built,” and “we seek a strategic relationship with that continent,” the Venezuelan president said, referring to West Asia.

Less than a year after Chávez’s announcement, the United States and its proxies launched a devastating decade-long regime-change war on Syria—one that continues today, with more than one-third of Syria’s sovereign territory, seizing most of its oil and wheat reserves, illegally militarily occupied by the United States in the northeast and NATO member Turkey in the northwest.

Chávez’s defense of and alliance with Syria against Western aggression led to the inauguration this March of a monument at the University of Damascus.

Nicaraguan President Daniel Ortega, the leader of the revolutionary Sandinista Liberation Front, has likewise steadfastly defended Syria and “condemned all forms of aggression by foreign powers that attack the sovereignty and self-determination of the [Syrian] people, in clear and flagrant violation of international law.”

As NATO bombed Libya, the US government refused to give a visa to the North African nation’s United Nations delegate. So in response, Nicaragua’s former foreign minister, Miguel D’Escoto Brockmann, announced he would represent Libya at the UN. (Washington then tried to block D’Escoto’s representation too.)

Axis of Resistance forces in Yemen has returned the solidarity. The de facto government in northern Yemen, ruled by the revolutionary Houthi movement, known officially as Ansarallah, has staunchly defended Venezuela against US aggression.

In a 2015 interview, a senior Ansarallah member declared, “We support Chávez in Venezuela.” When Washington initiated another coup attempt in Venezuela in February 2019, Ansarallah and leftist parties in Yemen held a protest condemning US interference.

Saudi Arabia has repeatedly killed Yemeni civilians with bombs made by US military contractor Raytheon.@BenjaminNorton documented the evidence linking these atrocities to American arms corporations.

A civilian in Yemen is killed every 3 hours on averagehttps://t.co/q52Sdj6evq

Global vanguard in building a new multipolar world
Latin American socialist governments and the Axis of Resistance in West Asia are the vanguards in the struggle to build a new, truly multipolar world based on national sovereignty and self-determination.

Together, they are helping to construct a truly multilateral order that challenges the authoritarian, unilateral, and brutally violent system created and controlled by the United States and its junior partners in imperialism.

This was further illustrated in July, when these nations launched an anti-imperialist alliance inside the United Nations, called the Group of Friends in Defense of the UN Charter. Venezuela, Cuba, Nicaragua, and Bolivia were joined by Iran, Syria, and Palestine, as well as the People’s Republic of China, the Russian Federation, Algeria, the DPRK, Cambodia, Laos, Angola, Belarus, Eritrea, Equatorial Guinea, and Saint Vincent and the Grenadines.

The economic partnership between member states of the Bolivarian Alliance and Iran likewise serves as a model for South-South integration that not only weakens Western imperial hegemony, but also helps to develop these countries in their mutual interests.

The ALBA was itself created to remove the middleman of the United States, so that Latin American nations could trade with each other and strengthen their own domestic economies, cutting out the North American corporations that want them to be dependent on imports.

Similarly, the announcement that Cuba and Iran will work together to manufacture COVID-19 vaccines exemplifies how this South-South partnership can help overcome the global pandemic.

If Latin America and West Asia can create a coherent formal alliance with China and Russia, it could pose a serious challenge to the imperialist US-EU-NATO axis.

As the United States accelerates its new cold war on China and Russia, such a coalition will only become more urgent.

Featured image: The socialist bloc of Latin America is uniting with Asia’s Axis of Resistance in the face of the United States’ new cold war. Photo courtesy of Al Mayadeen.