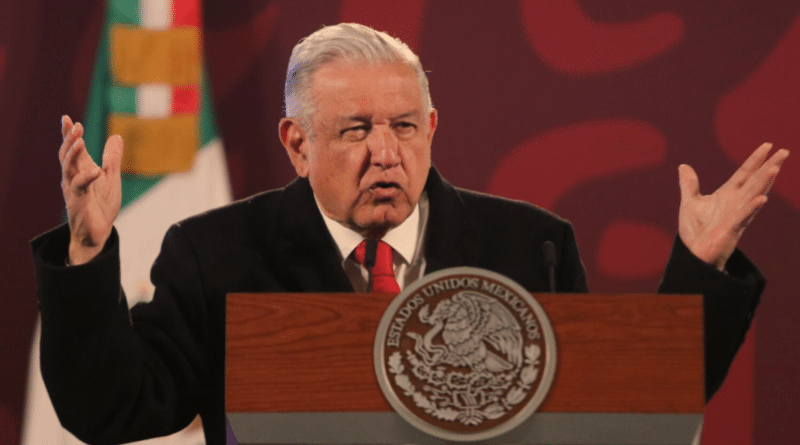 The smear campaign recently launched against López Obrador by Latinus—a media outlet financed by Roberto Madrazo’s family, pharmaceutical companies, and actors close to Claudio X González—and MCCI [Mexicans Against Corruption and Impunity] should be understood as an element of the larger soft-coup strategy promoted by politicians and business persons from the opposition. For Dr. Patricia Pozos Rivera, it is very likely that, as the 2024 elections draw nearer, the media will intensify its attacks against the president.

Financed by business interests and politicians who oppose the fourth transformation [AMLO’s 2018 campaign promise to do away with privileged abuses], the soft-coup strategy is well underway. The smear campaign launched by the media outlet Latinus and the organization Mexicans Against Corruption and Impunity—funded by Kimberly Clark and the US government—is part of this project aimed at weakening the government of President Andrés Manuel López Obrador.

During an interview with Contralinea, professor and researcher Patricia Pozos Rivera observed that, in analyzing the current situation, in which two visions of Mexico have clashed, it should be understood that right-wing groups, represented by the business class, are actively carrying out a soft coup d’état. “It’s a strategy which avoids an actual coup, such as a military one,” said Pozos Rivera. “It consists of attempting to discredit the democratic governments of Latin America.”

Pozos Rivera, a doctor in economy, professor in social and political studies, and researcher at the Center of Analysis of Economic, Political, and Social Change with the economic department of UNAM [National Autonomous University of Mexico], asserted that this type of coup passes through several distinct phases, each one more intense than the last. According to the late US-based political scientist, Gene Sharp, this coup strategy starts by softening the target society through suffering and despair, delegitimizing the actions of the government via the media; then constantly creating protests, using rumors to generate situations of false shortages of necessities, thus highlighting the incompetency of the government, and taking legal action against government officials. Lastly comes the phase of institutional fracture, in which the legal action takes its toll, the media backs the allegations, and the government finally crumbles.

In this regard, Pozos Rivera noted that “we have already seen the initial phase, the discrediting of the government, the stoking of popular unrest, destabilization, and lastly, the institutional fracture. During the softening phase, what happens is that a series of rumors and fake news is emitted, through which the opposition tries to pit society against the government.”

She added that, currently, these political and business sectors “are making progress in this strategy, and what we are seeing is a phase of delegitimization, with all of the headlines that this entails. This phase consists of chipping away at the credibility of the president, and since it is a president who has fervently attacked corruption, and since the corporate class was much more favored by the previous governments, this strategy of discrediting is carried out, presenting López Obrador as if he was another corrupt president: ‘nothing changes, they’re all corrupt, change is unthinkable.’ Saying that his family has lost their principles, or that they are no longer faithful to their anti-corruption discourse, is an attempt to delegitimize him, with the presidential recall process in mind, but particularly in preparation for the 2024 elections.”

Pozos Rivera also commented that López Obrador’s morning press conference is very important, but that it doesn’t break through the media siege, especially now that the head of state has to make use of his press conference “to refute the smear campaign being waged against him.”

In this vein, she remarked that “it is important to use solid arguments when refuting the allegations which are being thrown around, by mentioning how the mainstream media used to do business with previous governments. However, I consider these press conferences [by López Obrador] limited because they are not transmitted on national channels, unlike all of this fake news and the whole smear campaign. I think that is the difference.”

She then critiqued the mainstream media for only airing the odd fragment of La Mañanera, López Obrador’s morning press conference, and usually only using parts which play in their favor and are edited, ignoring the general context of the clips.

Regarding the strategy used to soften Mexican society, based on chipping away at the hope Mexicans have of a just government, a government which serves the majority and isn’t at the service of oligarchs and transnational interests, Pozos Rivera affirmed that this is how opposition politicians and business interests respond, by “making it seem as if there were no other possible scenario, that things can’t change, that all governments are the same, that there is no chance of discovering that other national project which Andrés Manuel López Obrador is fighting for.”

On this topic, she added that when the media narrative tries to claim that all politicians and governments are corrupt, this negates any possibility for change. She then remarked that “from my perspective, this is the strategy, because the right wing has already been in the government: PRI and PAN have already been in power and they didn’t do anything for the people, they only cared about serving capital. Thus their plan is making people think ‘yeah, things weren’t good, mistakes were made, but it is impossible for things to be any other way. The current president is a disaster, he makes decisions on a whim, he can’t make head or tail of anything, so we have to go back to what there was before, because now everything is chaos.'”

However, Pozos Rivera did recognize that the project of the fourth transformation has made progress and has changed many things in the country, changes which have been minimized by these smear campaigns, thus preventing the population from appreciating the achievements. “Progress is underway, but the smear campaign erases all of the progress made by this project of transformation,” she said. “That’s why they try to say that he is now the worst, and that we should return to the order which existed before. Since they are discredited, delegitimized, and the country is angry with them, all they can do is say that the current government is worse, and that the best thing to do is return to a priísta [PRI] or panista [PAN] government.”

“We can’t permit this ideology to be spread,” she added, “this ideology of despair—that there cannot be change, and that the current situation is worse than the one we came out of—which is totally false.”

According to her, despite the huge campaign against him, “they have not been able to damage the credibility of the president, because progress has been made and many important social programs have been implemented. Those sectors of society with which previous governments had a large historical debt have been given attention, whereas previously the government was only trying to benefit capital. And since López Obrador still has that base, that support, they are using this smear campaign to target a different population, that is perhaps more influenced by social networking and mainstream media.”

She also warned that the mainstream media, supported by the opposition to the current government, will scale up its smear campaign against the president, and they may even resort to other strategies to incur even more damage. Here she noted that “big capital and business is dangerous, because we know that they can affect the economy to a certain degree. We currently have a huge inflation problem, we know that a decent chunk of the economy is dependent on investment, and that is where big capital has the power to destabilize the country. The president has mentioned that we should not live in fear of this, as he has announced that there are lenders who want to invest in Mexico, and that there are business interests which will bet on his projects which seek to generate infrastructure. But this smear campaign could get ugly if they started trying to destabilize the economy.”

“We will keep track of these campaigns and how they escalate,” Pozos Rivera added. “I have also seen that during the morning press conferences, the president has been responding to these campaigns. What I am saying is that there is opposition to the national mainstream media’s narrative, which as we know is a business. Everything which is disseminated there is an attempt to favor certain groups, in this case private capital. Mexicans also know that there are interests lurking behind these campaigns. It seems like, since it is not working, they are going to turn their dirty campaign up a notch.”

All of this suggests that the government should take advantage of the channels which belong to the state. “The president has been against spending public money just to pay this big business for time on the air,” Pozos Rivera said. “He has been clear about his austerity law, and stressed that resources needed for other things will not be spent on political propaganda. However, there is a need for a platform where the population can access truthful information about what the state is doing.”

Interviewer: The context in which this smear campaign has been intensified is that of the debate on the electrical reform. What role is the media playing in hiding the discussion taking place on this reform?

Pozos Rivera: Smear campaigns become the most important headlines, they are what is shared on social media, sidelining things which actually deserve to be reflected on. The discussions on the population and on the electrical reform are an example, even the whole conflict in Ukraine, a very complex conflict. They deserve more space, the central aspects of this reform. It is important and strategic for the country that this reform is passed. It should be known that the government is striving to be self-sufficient, to protect the country’s resources, because the current legislation lets private companies participate more in the energy sector, which is a very strategic part of the economy.

“Now the government is trying to make the state be more active in the energy sector, for it to control the nations resources so that they are not looted,” added Pozos Rivera. “For example, with resources such as lithium, which is strategic for the development of new technologies, it is important that the state control and manage this resource, and that it isn’t given to businesses. I would like there to be reflection on this, because it may seem outdated to say that private investment isn’t important, but we must remember that the driving force behind business is the search for profits and privatization, and that few will benefit from these gains. When it is the state that manages this process, these resources can be protected and distributed, allowing for more government money to be available, which is the base of the budget, for the generating of social programs and infrastructure, and which in these conditions is very necessary in order to improve living conditions in Mexico.”

Lastly, she added that questioning the use of dirty sources of energy is part of the same narrative which tries to impose a false vision of reality. “The state produces more clean energy, even more than private companies,” said Pozos Rivera. “However, this is the narrative: it pollutes; the state’s participation is inefficient. Basically they just stick together a bunch of derogatory adjectives to discredit this reform which, I insist, is very important that it be passed.”