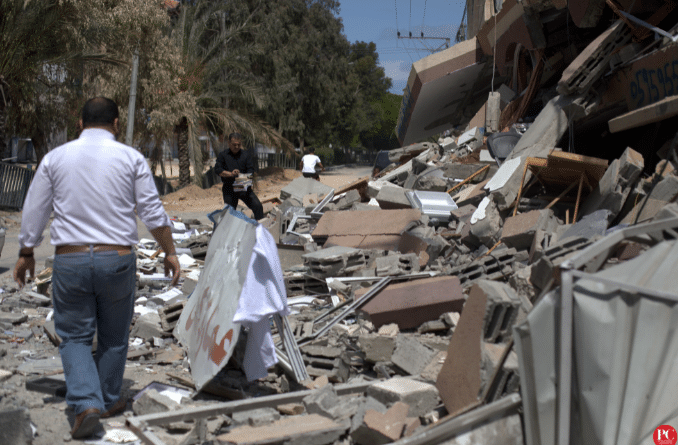 The Israeli military attack on the Gaza Strip in May 2021 had catastrophic economic effects, especially on the productive sector, and caused direct and indirect losses exceeding half a billion dollars in various sectors, Euro-Mediterranean Human Rights Monitor said in a report released last week.

In addition to targeting production facilities in different areas in Gaza, the Israeli army deliberately targeted the Gaza Industrial Estate (GIE), one of the largest production complexes in Gaza where many of Gaza’s production operations take place, as it contains dozens of factories and companies that employ hundreds of workers.

“By examining the Israeli army’s behavior and the nature of the precise munitions it used to target economic facilities, it becomes obvious that Israel may have deliberately targeted the productive sector in Gaza to cause severe and long-term damage to its productive capacities and stifle any efforts to achieve economic development in the beleaguered sector for more than 15 years.”

On May 10, 2021, the Israeli army began a large-scale military attack on the Gaza Strip that lasted 11 days, during which Israel carried out thousands of air and artillery attacks on the enclave that is inhabited by 2 million people. The attack killed over 250 Palestinians, including 66 children and 39 women, destroyed thousands of housing units and economic facilities, and caused significant damage to infrastructure.

During the military attack, the Israeli army committed multiple and complex human rights violations, which may amount to war crimes and crimes against humanity.

The report  called on the UN Security Council to open an investigation into the grave violations committed by the Israeli forces during their attack on Gaza including the killing of civilians.

Italso called on the International Criminal Court to investigate the Israeli attacks on the productive sectors in Gaza and take legal requirements that would end impunity for the perpetrators, and the international community to pressure the Israeli authorities to lift the strict restrictions imposed on Gaza, allow the entry of raw materials for the reconstruction process, and compensate the civilian population for the losses they suffered.

The electricity crisis has impacted all aspects of life in #Gaza. From 2006 to this day, dozens of patients have passed away due to the lack of electricity in the intensive care units (ICUs), writes @YousefAljamal
Read full articlehttps://t.co/jgADjSPlWT pic.twitter.com/x7McscHDw4

During the past months, Euro-Med Monitor released a series of reports on the Israeli military attack on Gaza last May, including “Inescapable Hell” and “One War Older.”

The reports aimed at investigating the Israeli violations during the attack and pushing for accountability for those involved in the human rights violations.

Featured image: Destruction in Gaza as a result of the Israeli war on the besieged Strip. (Photo: Mahmoud Ajjour, the Palestine Chronicle)