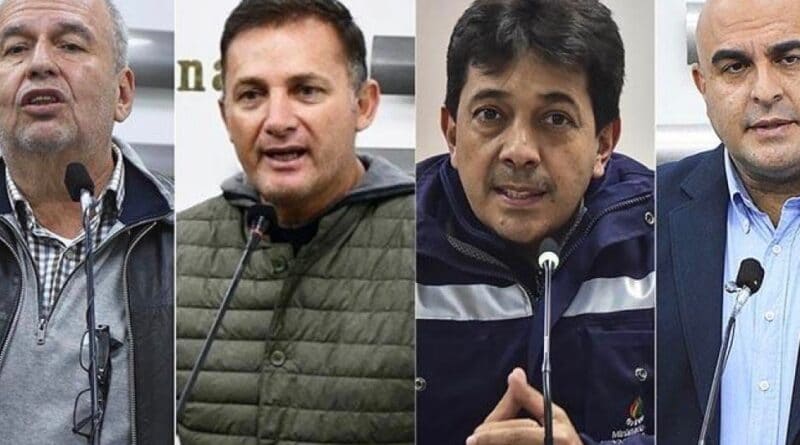 With the restoration of democracy in Bolivia, the process to seek justice for the numerous crimes committed by former ministers and officials of the coup-installed government has begun in the country. The newly elected government of president Luis Arce and vice-president David Choquehuanca of the Movement Towards Socialism (MAS) party has opened investigations against several former officials for their role in various corruption cases, massacres, incidents of violence and human right violations committed during their one year in office.

Some former officials have been arrested, while some have fled the country. The president of the de-facto government, Jeanine Áñez, who has not yet been questioned by the authorities, also tried to escape Bolivia on November 23. However, she was prevented from boarding a plane by a group of representatives of various social organizations at the Jorge Henrich Arauz airport in the Trinidad city in the Beni department.

Áñez faces a liability trial related to the massacres in Sacaba and Senkata as well as other incidents of violent police and military repression carried out on her orders against protesters mobilizing in rejection of the coup d’état against former president Evo Morales. According to the Inter-American Commission on Human Rights (IACHR), 36 people lost their lives in different regions of the country during various violent repression operations by security forces after the coup.

On November 23, a group of independent experts from the IACHR arrived in Bolivia to investigate all the incidents of violence committed under Áñez’s rule. The next day, on November 24, the commander of the Cochabamba Military Garrison, General Alfredo Cuellar, was arrested in connection with the massacre in Sacaba city. He has been charged with the crime of murder.

Former oil minister Zamora is under investigation for the crimes of abuse of power, breach of duties, corruption and unconstitutional resolutions. He allegedly committed these crimes during the lockdown period due to COVID-19 pandemic, when he was in charge of the state-owned oil company, the Yacimientos Petrolíferos Fiscales Bolivianos (YPFB).

According to the national police, Zamora’s whereabouts are unknown. He has not been located at his declared legal address nor at his parents’ home. The Prosecutor’s Office has requested information from the immigration department about his possible flight.

Former immigration director Rivas has been arrested and is being investigated for the crimes of inappropriate use of influence, concealment, breach of duties and political persecution. He has been accused of facilitating the escape of former government and defense ministers as well as of using the institution for “political purposes” and illegally issuing over 495 immigration alerts against the officials, politicians, journalists, diplomats and businessmen considered close allies of the ousted president Morales and opponents of the Áñez’s regime.

Last week, on November 16, arrest warrants were issued against former government minister Arturo Murillo and former defense minister Fernando López in the “tear gas” case, related to the purchase of the non-lethal chemical weapons from a Brazilian company, Condor, at an inflated price for the national police. They are accused of misuse of power and of having purchased 50,000 units of long-range and triple-action projectiles for 2 million USD.

On November 17, the general commander of the police, Jhonny Aguilera, reported that both the officials had fled the country. He stated that Murillo and López escaped to Brazil on November 5, three days before the rule of the de-facto government ended. From Brazil, Murillo fled to Panama on November 9. Three officials of the immigration department, in addition to Rivas, have been arrested for allowing the escape of fugitives, on whom an immigration alert was already weighing.

According to the recent police investigations, Murillo and former vice-minister of interior Javier Issa are now in the United States, and López remains in Brazil.

Issa is accused of having participated in the theft and supposed burning of the military service book of former president Morales. In this case, the former director of the Special Force for the Fight Against Crime (FELCC), Iván Rojas, has also been detained.