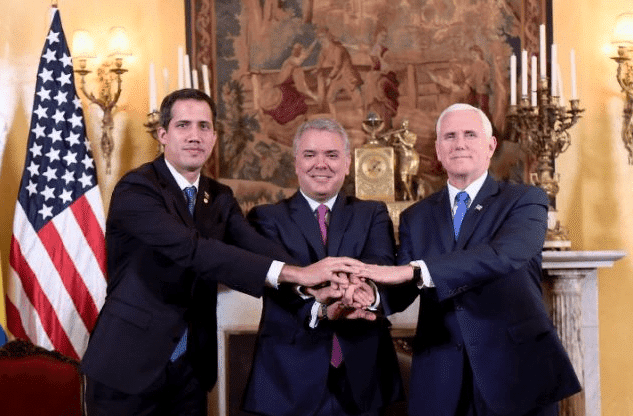 For now, tensions on the Venezuelan border with Colombia and Brazil have dissipated for the time being, beyond the skirmishes, after the failure of the operation of convoys with “humanitarian aid” this February 23 through the border check-points of Cúcuta -Táchira and Paracaima-Amazonas.

The idea, probably imagined by the special envoy Elliott Abrams, was to escalate to the point of a confrontation where the government of Nicolás Maduro could be criminalized while the aggression is clearly orchestrated by Washington and Bogotá. The various contrasted versions confirm that irregular force operators were behind the burning of the trucks on the Francisco de Paula Santander border bridge. However, this seems to be the “casus belli” as an argument for military intervention on Venezuela, analogous to Iraq’s “weapons of mass destruction” and “Gaddafi’s bombing of the population” in Libya.

The next step of the hemispheric coalition against Venezuela was to convene a meeting of the so-called Lima Group in Bogotá on Monday, February 25, which was given as a ceremony for the US vice president Mike Pence, who attended the conclave, to assign the lines of action of the violent siege on the Bolivarian Republic.

In the meeting, partly covered by corporate media, given that many of its moments occurred strictly off-the-record , it highlighted, above all, the lack of consensus regarding a possible military intervention led by the Pentagon and the personal agenda that Iván Duque and Mike Pence have against Chavismo.

A PREFABRICATED AGENDA
Before the meeting, the fugitive from justice Antonio Ledezma issued a statement in which he demanded his partner Juan Guaidó put on the table of the Lima Group the letter of “humanitarian intervention based on the Responsibility to Protect (R2P)” , a “legal” approach used in the bombing of Yugoslavia and Libya for the establishment of a multilateral intervention coalition. This confirmed (once again) the willingness of an anti-Chavez sector to promote the US “military option” as the only possible one.

Despite these calls, there is a sector closely linked to US policies that do not support an operation of this type, of course, after having launched a criminalization campaign against the Bolivarian Government and Chavismo in general. Such is the case of José Miguel Vivanco, director for Latin America of Human Rights Watch, as a sign of unprecedented damage control due to what was recorded by government and independent journalists on February 23 in the border areas in the framework of the humanitarian show .

Likewise, the European Commission, through the community spokesperson for Foreign Affairs, Maja Kocijancic, expressed that her will “is very clear: we must avoid military intervention”.

All these discursive demonstrations not only confront the issue of military invasion, taking as precedent what happened in Libya after the application of R2P under a curtain of mediatic lies, false positives and false flag operations, but it demonstrates the prefabrication of the agenda at the meeting of the Lima Group as a watershed that polarizes the positions on the Venezuelan conflict.

Iván Duque in his speech today gave, precisely, the coordinates that the plan of aggression against Venezuela has in its conception, with the element of war as a necessary letter even though it is rejected in advance by numerous actors in the region.

SPEECHES AND IDEAS (EMPTY)
Duque, Guaidó and Pence, in that order, gave a new kind of discursive emptiness , based on media fiction, psychological operations and anti-political will.

The Colombian president, of course, the senator Álvaro Uribe Vélez, spoke of the successes and continuation of the “diplomatic siege” against the Venezuelan State and gave his energetic word on a forceful measure that would lead to the overthrow of Chavismo in power, polarizing the scenario: “The situation in Venezuela is not a dilemma between war and peace, the real dilemma is the continuation of tyranny or the triumph of democracy, human rights and freedom.”

Although the coercive actions against Venezuela clearly point to a regional war situation, Duque alleges that: “What happened on Saturday is not a defeat (February 23), because today we are here to reaffirm our commitment to deliver that humanitarian aid.”

Is a new similar operation proposed for the border bridges, in absolute connivance with the generators of the coup? It remains to be seen if such a call has already been placed to the bases of the opposition, that in scenes of violence the mass mobilization is lost due to the belligerent foquism of anti-government mercenaries (remember 2014 and 2017).

The truth is that Duque seems to worry publicly that the legitimacy of the dictator Maduro not be strengthened and that it is not too obvious that he is proposing a military action against Venezuela.

In the same way, Guaidó appealed to the binary sense in decision-making within the Lima Group: “The dilemma is between democracy and dictatorship, between massacre and saving lives.”

The one (statement) of Voluntad Popular was emphatically moving, obviously, the blame for the burning of “humanitarian trucks” on the Colombian-Venezuelan border to Chavistas, which, according to him, are only hiding in “irregular armed groups”, suggesting that the entire FANB (Venezuelan Army) would end up deserting and joining the coup.

While the fugitive from justice gave his speech and Mike Pence was preparing for his, the Treasury Department announced new sanctions against four Chavez governors, who are responsible for commercial seaports , in a financially analogous aggression to a naval blockade.

With his theocratic style, the US vice president referred to the latest financial actions in Washington, announced the delivery of 56 million dollars to the Lima Group and showed Donald Trump as a “great champion of freedom.” He gave his backing to Guaidó and mentioned, as his predecessors in the microphone, the events of February 23 as a sign that this is a struggle “between democracy and dictatorship.”

He therefore asked the countries of the regional coalition to “freeze the assets of Venezuelan officials and transfer them to Guaidó,” and then demand that the members of the FANB accept the “generous amnesty” of the National Assembly.

Based on the false positives and false flags at the borders, he expressed his support for the Casa de Nariño around its belligerence, shifting all provocation guilt to Venezuela: “Colombia is our most important partner in the region, and any threat to its sovereignty and security will face the determination of the United States. ”

This can only mean favorable support for an international military intervention with the two most aggressive actors in the region: Colombia and the United States.

The nomenclature expressed (“regional threat”), which ended up undermining the Lima Group’s declaration, is taken from the US Southern Command, whose senatorial reports bare the intentions to intervene in Venezuela, characterizing it as an outlaw narcoestado that has alliances with organizations that the White House calls terrorists such as the Colombian ELN and Lebanese Hezbollah.

The growing use of naming organized Chavismo as “paramilitaries” or “irregular armed groups” only focus on that characterization as a motive susceptible to be eradicated by the “security of the region.”

THE MANAGEMENT OF EXPECTATIONS
The statements of the different national representatives in the Lima Group Summit suggested that it is better to handle other actions than the military intervention on Venezuela, which ended up being reflected in the final declaration of the meeting; rather they opt for “diplomatic and financial pressure”.

In fact, the vice president of Brazil, General Hamilton Mourao, expressed, in the context of the meeting, that his country would not engage in a military adventure sponsored by the United States. In addition, the Brazilian Ministry of Defense reported that it reached an agreement with its homologous institution in Venezuela to prevent further episodes of violence, in which anti-Chavista irregular groups attacked Venezuelan security forces.

However, the “all options are still on the table” resonates both with Guaidó and with the White House in previous days. Each “D-Day” proposed by the opposition leadership is counterproductive when the expected circumstances are not defined. We have seen it in recent years, in which they promised the base of his followers a definitive D-day to overthrow Chavismo from state power. In this way they have successively lost political capital for their aspirations. That Guaidó and his team had abandoned the “humanitarian aid delivery” plan brought an immense disappointment in those who placed their trust there, finally, the desired military intervention would arrive with American flags and smiles. The announcement that Washington called a new session of the United Nations Security Council to discuss the issue of Venezuela brought a new wave of rejections to the movements of the coup and war hawks, it is known that both Russia and China enjoy of veto power in the face of a military escalation against a strategic ally in the Latin-Caribbean region such as Venezuela.

Certainly, while the intentions of exercising an act of force that triggers a war scenario by proxy between Colombia and Venezuela, or through mercenary commandos supported by the Colombian army, the Southern Command and NATO, the fall of Guaidó to the eyes of his followers is increasingly high.

The United States will most likely try to lengthen the Guaidó effect by taking the case of the “humanitarian trucks” to the UN Security Council, alleging crimes against humanity by showing the images of February 23 as an achievement to press for greater isolation against the country.

On the other hand, the head of the Council of the Americas, Eric Farnsworth, maintains that a military action would break “the international coalition against the Bolivarian Republic.”

An evident sign that even a military intervention lacks the necessary support, and that in the public light, it needs to be manufactured given the counterproductive nature that it represents for most of the countries of the Lima Group, which to this day are taking out the body of this initiative.