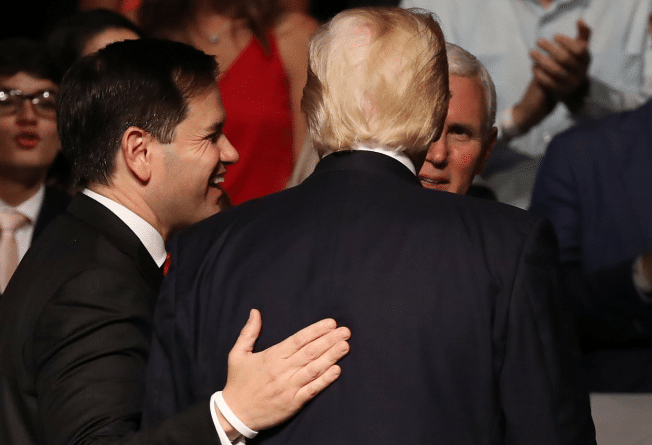 The past weekend was terrible for the White House and its unprepared foremen of the south of the Rio Grande, the appropriately named “Cartel” of Lima given the close ties that some of the governments that comprise it have with drug trafficking, especially the Colombian and, before the advent of López Obrador, that of Peña Nieto in Mexico. On Saturday the US strategists decided to organize, for February 23, a music show with some of the celebrities consecrated by the “maiamera” music industry. The event attracted some 25,000 people, one tenth of what was expected, divided hierarchically into two clearly demarcated categories. The VIP sector where presidents went -Duque, Piñera, Abdo Benítez- ministers and hierarchies of the Cartel and, two hundred meters behind (sic!) the rest of the public. (see: https://www.laiguana.tv/…/438246-concierto-aid-live-fotos-…/). The organizer and financier of the show was British magnate Richard Branson, a well-known tax evader and sexual harasser who hired a series of singers and right-wing groups including Reymar Perdomo, “El Puma” Rodríguez, Chino, Ricardo Montaner, Diego Torres, Miguel Bosé, Maluma, Nacho, Luis Fonsi, Carlos Vives, Juan Luis Guerra, Juanes, Maná and Alejandro Sanz , who competed fiercely to see who took the Oscar  for the biggest bootlicker of the empire.

This concert was supposed to create the necessary climate to facilitate the entry of “humanitarian aid” prepared in Cúcuta by the Americans and their servants in the Colombian government. But it was not like that, and for several reasons. First, because, as the Red Cross affirmed, the only kind of aid, carefully inspected, that can be sent (something that was not done, anyway) is if the government of the country that is going to receive the cargo requests it. In the same sense, the Secretary General of the UN, Antonio Gutérrez, expanded. And, second, because the Bolivarian government did not do it because it knew very well that the United States uses that “help” to introduce spies, undercover agents disguised as doctors and social and paramilitary assistants into enemy territory and, of course, it was not going to consent to that move.

Further, if indeed the White House had a genuine interest in offering aid to alleviate the sufferings of the Venezuelan population, it has in its hands a much simpler and more effective remedy: lift the sanctions with which it has been oppressing the Bolivarian Republic; or abolish the veto they impose on international commercial relations; or return the enormous assets of the confiscated public companies of that country, in an act that can only be described as a robbery, by decision of the government of Donald Trump or authorities such as the Bank of England that appropriated the Venezuelan gold deposited in its treasure valued at  over 1,700 million dollars. The raging reaction of the right to the failure of the operation “humanitarian aid” was tremendous. The actual narco-president, Iván Duque, greeted from the heights of the international bridge the bands of delinquents hired to produce riots while they prepared their molotov bombs and oiled their arms. When faced with the firm resistance of Bolivarian civilians and military, the failure of the US operation, the lumpennage, protected by the Colombian National Police, took the bridge by assault and proceeded to set fire to the trucks that brought “humanitarian aid”. Predictably, the press blamed the Venezuelan government: there are the photos published by the whole world media rabble with the corresponding heading demonizing the Chavista barbarism and hiding the true people responsible for barbarism. (see video on the subject at: https: //youtu.be/fxTDm11_rmE)

Meanwhile, in perfect coordination, the occupants of a Bolivarian police tank attack the fences that were on the bridge to facilitate the “spontaneous” desertion of three policemen seeking asylum in peaceful and prosperous Colombia. The press, however, said nothing of the attentive “stage managers” who, from the Colombian side of the bridge, told the deserters how to act, where to enter, what to say and shouted at them “raise the weapon, raise the weapon! “to make it clear that they were Bolivarian police or military fleeing from the” dictatorship “of Maduro. All this is categorically documented in a video that, of course, the “serious press” has taken great care to reproduce (see https://twitter.com/OrlenysOV/status/1099505029663412224 …) .

In short, a huge diplomatic fiasco that can not be hidden, which, unfortunately for the troops commanded by Trump, would be just the prelude to another even worse one.

We refer to the much publicized meeting of the Lima Cartel in Bogota, which to its eternal dishonor was chaired by the Vice President of the United States, Mike Pence, making clear the patriotic and democratic nature of the Venezuelan opposition. Trump’s vice arrived in Bogota to meet, in a pathetic demonstration of the vertiginous decline of the once huge American power in the region, with a group of secondlings. In other times, the arrival of an emissary of the highest level of the White House would have unleashed an overwhelming “herd effect” and one after another the nefarious neocolonial presidents would have run in droves to arrive as soon as possible to the official besamanos. But times have changed and Pence could only shake hands with his discredited host and with the comic buffoon of the New York mogul, the self-proclaimed “President in Charge” Juan Guaidó. The rest were people of lower rank: chancellors and even vice-chancellors who with the best faces for the circumstances listened, with feigned solemnity, to the reading of the death certificate of the US coup plot and, almost certainly, of the Lima Cartel itself, on account of its proven uselessness. The document, read with reluctance and in a depressing climate, returned everything to zero sheets and re-sent the issue to the labyrinth without exit of the Security Council of the UN.

A gigantic failure of the United States government in an area that some northern troglodyte called not only its “backyard” but its “back door”. The deadlines for the “exit” of Maduro (first raised by Pedro Sánchez, from Madrid and then reiterated by Trump, Pompeo, Pence, Bolton and all the thugs that now shelter under the wings of the US president) dissipated like a vaporous morning mist under the burning sun of the Venezuelan Caribbean. Not only that, before the evident signs of the decline of imperial power the neocolonial lackeys opted to get out of the disaster and in an unexpected gesture declared their opposition to a military intervention in Venezuela. The brave warriors of the south perceived that in their own countries a gringo intervention in Venezuela – even under the unsuccessful cover of an operation of “joint forces” with the Colombian military or of any other country – would be unpopular and would cause them serious political costs and opted to save their exposed skins and let Washington take care of the matter.

What can Trump do now? Victim of his verbiage and the brutality of the grim gangsters who advise him, will he now extract the last card of the deck, the military option, which was always on the table? It is difficult for a character like him to admit such an impressive diplomatic and political defeat without a violent gesture, an artful stab. Therefore, that possibility should not be ruled out although I believe that the probability of an invasion Santo Domingo 1965 or Panama 1989 style is very low. The Pentagon knows that Venezuela is not unarmed and that a raid on the lands of Bolívar and Chávez would not be the same as the invasion in the unarmed Granada of 1983 and would cause many casualties among the invaders.

If Washington exploded the battleship Maine in the Bay of Havana in 1898 (sending to death  254 sailors) to justify the declaration of war against Spain and to keep Cuba; if President Franklin D. Roosevelt agreed to allow the Imperial Japanese Navy to attack Pearl Harbor “by surprise” in December 1941, killing about 2,500 sailors and injuring 1300 others, to enter the Second World War. To believe that if something bad happens to Guaidó, that nobody wants, the culprit could be none other than the government of the United States? The next few days will begin to uncover this mystery. The truth, however, is that for now, the entire coup-led operation perpetrated by Washington’s thugs has gone from failure to failure.