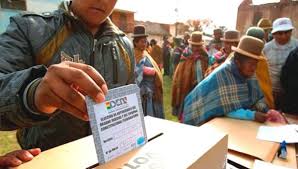 Washington, DC ― Statistical analysis of election returns and tally sheets from Bolivia’s October 20 elections shows no evidence that irregularities or fraud affected the official result that gave President Evo Morales a first-round victory, researchers and analysts at the Center for Economic and Policy Research (CEPR) say. Contrary to a postelection narrative that was supported, without evidence, by the OAS Electoral Observation Mission, statistical analysis shows that it was predictable that Morales would obtain a first-round win, based on the results of the first 83.85 percent of votes in a rapid count that showed Morales leading runner-up Carlos Mesa by less than 10 points.

The new paper, “What Happened in Bolivia’s 2019 Vote Count? The Role of the OAS Electoral Observation Mission,” presents a step-by-step breakdown of what happened with Bolivia’s vote counts (both the unofficial quick count, and the slower official count), seeking to dispel confusion over the process. The report includes the results of 500 simulations that show that Morales’s first-round victory was not just possible, but probable, based on the results of the initial 83.85 percent of votes in the quick count.

RELATED CONTENT: Evo Morales: “The Opposition Will not Recognize Election Results” – Denounces Coup in the Making

“There is simply no statistical or evidentiary basis to dispute the vote count results showing that Evo Morales won in the first round,” CEPR Senior Policy Analyst, and coauthor of the paper, Guillaume Long said. “In the end, the official count, which is legally binding and completely transparent, with the tally sheets available online, closely matched the rapid count results.”

Mark Weisbrot, Co-Director of CEPR, noted that it was very unusual, and highly questionable, for the OAS to issue a press statement questioning election results without providing any evidence for doing so. He noted that the OAS preliminary report on the election also provided no evidence that anything was wrong with the vote count.

“The OAS press statement of October 21 and its preliminary report on the Bolivian elections raise disturbing questions about the organization’s commitment to impartial, professional, electoral observation,” said Weisbrot. “The OAS should investigate to find out how such statements, which may have contributed to political conflict in Bolivia, were made without any evidence whatsoever.”

The paper verifies that historic voting tendencies favoring Morales in later-reporting polling areas explain why the gap between Morales and Mesa widened as votes were counted, ending with an official result that put Morales ahead of Mesa by 10.57 points.

The paper also shows that the respective voting trends for Morales and Mesa were consistent, contrary to the OAS’s early postelection statements: “Neither the quick count nor the official count exhibit sudden changes in trends in the final results, and the same well-known trend, explainable by geography, is evident in both counts.”

“We encourage anyone interested in what happened in Bolivia’s elections to do their own examination of the tally sheets and their own statistical analysis,” Long said. “Hopefully, the OAS electoral mission will do that. But we also need to remember that an OAS electoral mission overturned election results in Haiti in 2011 with no statistical or other basis for doing so.”